Earlier this week, a very smart, non-lawyer friend asked me: “So is the Fifth Amendment basically just a cop-out?” I thought for a moment and responded, “Yes. But it’s a Constitutionally-sanctioned cop-out.

Suddenly, the Fifth Amendment is all the rage. Disgraced former DOJ official-turned-coup-plotter Jeffrey Clark got the party started when he belatedly took the Fifth to avoid testifying before the January 6 Select Committee. Lunatic lawyer John Eastman – I decline to attach the usual “conservative lawyer” moniker because there’s nothing conservative, or lawyerly, about his memo claiming the vice president could unilaterally overturn the election in favor of  Donald Trump – quickly followed suit by calling on the Fifth Amendment, among other less-applicable privileges, to get out of his testimony.

My first reaction: what took so long? Faithful readers of this column might recall that way back on October 1, I wrote: “Speaking of the Fifth: the targets here hold a trump card, so to speak. Any of them can choose to remain silent and avoid potentially incriminating themselves. They’d all have a legitimate basis to invoke the Fifth.” (Stick with me, everyone; I call things right once in a while.)

So how exactly does the Fifth Amendment, the great Constitutional cop-out, work? First, the Fifth Amendment is extraordinarily broad. Any person can choose to remain silent in any proceeding – criminal, civil, administrative, and yes, congressional – if he reasonably believes his testimony could tend to incriminate him. It’s a sacred and expansive right, exercised almost entirely in the subject’s discretion.

In the rare instance where a prosecutor or other party believes that a person is falsely taking the Fifth simply to avoid testifying, the invocation can be challenged. But judges almost always defer and uphold the invocation, so long as it’s based on just the tiniest sliver of potential criminal exposure. Clark and Eastman both have ample basis to remain silent here, given that their conduct on and around January 6 at least arguably could have violated federal laws including depriving a state of a fair and impartial election, coercion of political activity, and conspiracy to defraud the United States. Put it this way: if you think Clark and Eastman might have committed a crime, then you also have to agree they have the right to take the Fifth.

There’s nothing inherently wrong with taking the Fifth. To borrow a phrase from Tevye in Fiddler on the Roof: it’s no shame – but it’s no great honor. It’s right there in the Bill of Rights, for good reason. Our justice system differentiates itself from others that we deem less advanced in part because we don’t believe in compelling testimony from the accused. It’s a broad matter of dignity and fairness.

But it also can be damn infuriating, as we’re seeing now with Clark and Eastman.

Now that Clark and Eastman have exercised their right to remain silent, they can’t realistically be prosecuted for criminal contempt of Congress, because a legitimate invocation of the Fifth Amendment is a lawful response to a subpoena. In theory, the Committee might seek contempt charges against Clark because he was dilatory in taking the Fifth; he never raised the Fifth Amendment as an excuse when he refused to testify in his first session with the Committee, back on November 5. But that’s a mighty technical distinction. There’s simply no way DOJ indicts for contempt where a witness invoked the Fifth, even if he did it later than he should have.

However, the Fifth Amendment is not an all-purpose get-out-of-jail-free card. Crucially, Clark and Eastman both can still be prosecuted for any underlying crimes they might have committed. All that the invocation of the Fifth means is that prosecutors won’t have testimony from Clark and Eastman to use against them. But if prosecutors have sufficient evidence from other sources, then by all means, they can fire away with charges. (That said, and importantly: there’s no public indication whatsoever that Attorney General Merrick Garland is seriously investigating either of these men, or any other power players, for their conduct relating to January 6.)

The case of Kenneth Lay, the infamous founder of Enron, offers a useful example of what the Fifth can and cannot do. When Lay received a congressional subpoena in 2002, he took the Fifth, clearly mindful of his potential criminal liability for defrauding investors of billions of dollars. Once he took the Fifth, that was it for the subpoena – there was no way for Congress to hold him in contempt for refusing to testify, or for DOJ to bring criminal contempt charges. But the Fifth did nothing to prevent criminal fraud charges for Lay’s underlying behavior, and he was eventually indicted, tried, and convicted. (He died in 2006, just weeks before sentencing.)

The Committee does have one counter-move here, but it’s both fraught and highly unlikely — immunity. Congress essentially makes this deal with the witness: we agree that we won’t use your testimony against you – so now you have no basis to invoke the Fifth Amendment, and you must testify. The problem, however, is that if Congress grants immunity, they essentially make it impossible for DOJ to charge the witness with any crime that touches on the testimony. This is what happened with Oliver North, the infamous military official at the center of the Iran-Contra scandal in the 1980s. North took the Fifth in Congress, Congress immunized him and forced him to testify, he was later prosecuted by DOJ and convicted – and then the federal courts threw it out. Can’t do that, the courts said to DOJ and Congress; once you immunize somebody, it’s game over.

There’s virtually no chance the Committee grants immunity to Clark or Eastman, or anybody else who might follow. But the Committee has smartly refused to accept vague, blanket invocations of the Fifth, transmitted in bland letters from lawyers. Instead, the Committee has insisted that if the witnesses want to invoke the Fifth, that’s fine. They just need to come in and do it directly, in person, on a question-by-question basis.

This approach serves two important ends for the Committee. First, it forces Clark and Eastman to be specific about where they’re invoking the Fifth. All-purpose invocations won’t do; they need to be precise about what questions they refuse to answer. Second, the Committee isn’t going to let these guys hide behind lawyers and letters. If you want to take the Fifth, the Committee is saying, go for it – but we’re going to hang it around your neck for all time.

The Committee needs to drive home this crucial point: these guys are hiding something, and we should all understand just how serious that is. By taking the Fifth, Clark and Eastman – both smart, accomplished lawyers, despite their inexcusable enabling of Trump’s coup attempt – have acknowledged that they likely played a role in very serious crimes. Keep that in mind next time Trump or one of his acolytes tries to claim that nothing too awful happened on January 6, that it was mostly tourists, that the cops were holding the Capitol doors open and handing out hugs and kisses.

We already knew this revisionist history was a load of bull. And now we have Clark and Eastman, and their invocations of the Fifth Amendment, to further remind us. They’re not cheating the system. But they also don’t get to walk away, judgment-free. 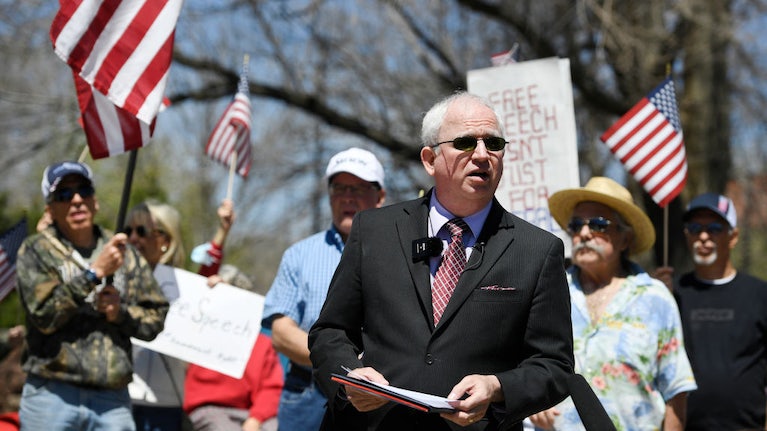 Note From Elie: Taking the Fifth: The Constitutional Cop-Out