A weekly Note from Elie is part of the CAFE Brief, and Insider members can listen to his recording of the note. Please enjoy Elie reading this week’s note, “The “5:00 p.m. Coronavirus Task Force Briefing” Misnomer,” and read his note in your inbox every Friday.

When President Donald Trump petulantly tweeted that he just might stop holding his daily press briefings on the Coronavirus — “Not worth the time & effort!,” he thumbed — did anyone really believe him?  Trump’s petty threat reminded me of the mercurial NFL quarterback Brett Favre, who announced his “retirement” from football — four separate times.  Or The Who, when they declared that their 1982 world tour would be their last.  (“Won’t Get Fooled Again,” indeed).  Sure, sometimes the grind, the punishment, the self-inflicted damage get to be too much, and it seems like the right move to call it quits.  But for Trump, like Favre and The Who, the lure of the spotlight is just too strong.  We knew he’d be back.  It’s in his nature.

It actually did seem for a moment that Trump might follow through.  No presser Saturday, silent Sunday.  But then on Monday — after a scheduling, a cancellation, and a re-scheduling — there it was, right back on the President’s daily schedule, just as it had been for the previous six weeks: “5:00 p.m.: Coronavirus Task Force Briefing.”  As this week progressed, Trump varied the location for the briefings, but the substance remained the same.

Funny thing about that description: every single component of the phrase “5:00 p.m.: Coronavirus Task Force Briefing” is misleading, at best.  Let’s break that down:

“5:00 p.m.”  What, you thought the Commander-in-Chief would come out right at five, as scheduled?  Oh, no.  He’s a showman.  He keeps us waiting.  He lets the crowd build to an anticipatory frenzy.  It’s 1988, Guns N’ Roses is on the Appetite for Destruction tour, and he’s Axl Rose.  The tickets may say whatever start time, but you aren’t hearing the opening lick of Welcome to the Jungle until the band is good and ready.  So forget about the show starting at five sharp.  Trump will come out at 5:45 — if you’re lucky.  Or could be 6:15, 6:30, who knows.  It’s up to him, and you’ll wait, but it’ll be worth it.

“Coronavirus.”  Very little is actually about the Coronavirus.  Sure, Trump sometimes starts off head down, vacantly mumbling through a set of prepared remarks that actually include facts and useful information about the virus’s spread and the Administration’s response.  But once he drops the script and gets on with the Q&A, it’s all about four things: (1) I deserve credit, (2) I don’t get enough credit, (3) other people deserve blame, and (4) other people don’t get enough blame.  That’s without even accounting for the detours and rants about impeachment, the Democrats, China, Michael Flynn, and of course, the media.

“Task Force.”  Well, kinda.  The only real constant is that it’s The Donald Trump Show.  Sometimes he lets Dr. Deborah Birx talk — “Debbie,” as he calls an accomplished physician and ambassador — sometimes not.  Dr. Anthony Fauci seems to have fallen off the invite list; Trump can’t stand to be upstaged.  Vice President Mike Pence takes the mic once in a while, mostly to thank and congratulate Trump.  There’s the occasional roll call of pharmacy chain CEOs, for some reason.  And they even trotted out Jared Kushner — once — who whined that “it’s supposed to be our stockpile, it’s not supposed to be the states’ stockpile” before they sent him back to the gilded fairytale land of malevolent incompetence where he normally dwells.

“Briefing.”  “Briefing” suggests something orderly, data-driven, a no-nonsense “Here’s what you need to know, for better or worse.”  If you’ve seen these conferences, well…  they’re not that.  They’re closer to professional wrestling hype events.  Think I’m exaggerating?  Let’s play a quick round of “Who Said It?  President Donald Trump or WWE Superstar Stone Cold Steve Austin”: (1) “It’s a tough deal. It was a bad, bad level. That was a bad group. That’s as high as it gets.” (2) “You treat me like a dog and you expect me to smile?” (3) “I no longer need my power tie because I always have my power finger.” (4) “You’re so — you’re so — you’re so disgraceful. It’s so disgraceful, the way you said that.”  (5) “Nobody tells me what to do, and that’s the bottom line.” (6)  “The authority is total.  And that’s the way it’s got to be.”

The daily briefings are on a jagged but unmistakably downward trajectory.  They started off urgent and chaotic and scary, as the Coronavirus exploded and the Administration struggled to grasp the scope and complexity of the crisis.  Then the conferences got confusing and, at least for Trump, cathartic, as he unleashed rage on anyone who dared to meaningfully question him.  Eventually a collective malaise and frustration set in — a sense of “Why are we doing this every day, and will there actually be any relevant information provided?”  Eventually, the pressers crossed into downright dangerous territory when the President said, out loud, that perhaps injecting disinfectant into the human body might combat the virus.

These press conferences have been a massive opportunity wasted, for Trump and the American public.  Politically, it wouldn’t have taken much for Trump to do these things right and well.  I’ve advised public officials — U.S. Attorneys, state Attorneys General — before press conferences, sometimes in high-pressure circumstances (though not comparable to this).  The sound political messaging here is obvious: Stress our common mission and show empathy for those who have lost.  Be direct, be honest, be candid about what we know and don’t know, and refer all technical questions to the real experts.  That’s it.

Imagine if Trump had simply done just that.  Imagine the boom he could be seeing in public opinion.  New York Governor Andrew Cuomo follows this playbook every day.  Now 87% of eligible voters, including a remarkable 70% of Republicans, approve of his job performance.  New Jersey Governor Phil Murphy does essentially the same thing in his briefings, and his approval ratings quickly soared from a pitiful 41% to an almost-never-happens-in-Jersey 71%.

And that’s just the crassly political calculus.  But there’s a more powerful concern here: informing the American public about the Coronavirus, and governmental response to it.  On that score, Trump has failed, utterly and completely.  If Trump had never held a presser at all, we’d be in better shape.  We wouldn’t have to waste time and divert focus sifting through the lies, the contradictions, the whining, the belittling, and the potentially lethal self-medication advice.

Someday, somebody’s going to make a movie about these deeply loony daily pressers.  It almost has to be a documentary because even the most creative, over-the-top scripted feature could not possibly capture the surreality of these public debacles.  As with the best documentaries — think Grizzly Man or Tiger King — viewers will find themselves thinking at the end, “I can not believe that actually happened.”  Well, it’s happening.  Every day, still.  And these conferences simply aren’t doing anybody any good.

Notes from Elie — The Archive 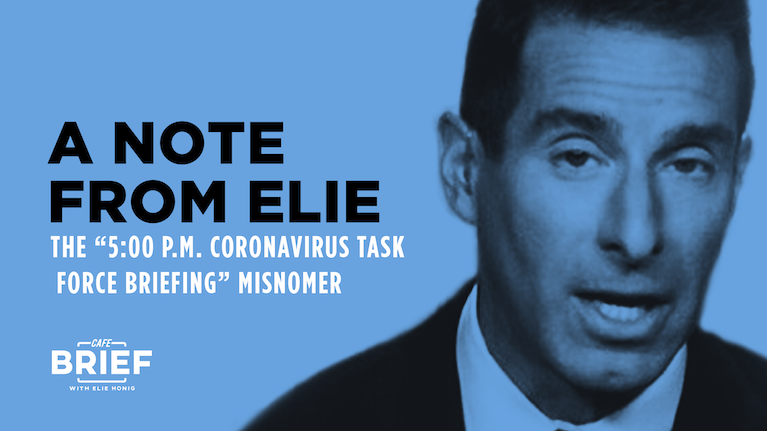