Representative Bennie Thompson, Chair of the House Select Committee on January 6, is not playing around. And we are now on the brink of an epic, internecine congressional brawl.

The gavel had barely come down on a wrenching day of testimony by United States Capitol Police officers who lived through the terror of January 6 when Thompson made a point to declare publicly that he’ll be looking at what happened inside the Capitol that day, sure — but he won’t stop there. Thompson made clear the Committee also intends to look about 1.7 miles up Pennsylvania Avenue, to the White House: “Anybody who had a conversation with the White House and officials in the White House while the invasion of the Capitol was going on is directly in the investigative sights of the committee.” Even more pointedly, Republican Committee member Liz Cheney vowed to explore “what happened every minute of that day in the White House… [e]very phone call, every conversation, every meeting leading up to, during and after the attack.”

Importantly, Thompson also seems intent on not wasting time with polite letters hereby formally requesting the attendance of the key witnesses, or drawn-out negotiations. Rather, he declared bluntly, “I have no reluctance whatsoever in issuing subpoenas for information” and that “nothing is off limits in this investigation.”

So who might wind up on this illustrious guest list? Start at the top: the former president, Donald Trump. It sounds dramatic, and it is, but who better to explain what exactly was happening inside the White House as insurrectionists pillaged the Capitol than the then-president himself? But there’s a political and practical reality here. Will the Committee want any part of the massive spectacle — “circus,” some might fairly call it — that would accompany a Trump subpoena? Is there any realistic probability of Trump complying, or offering up anything close to the truth to make his testimony worthwhile? And does Thompson want any part of what is sure to be a protracted, to-the-death legal battle if Trump resists? (More on this below.)

But the big names on the subpoena target list still run deep, even beyond Trump himself. Trump’s Chief of Staff Mark Meadows, son-in-law (er, “Senior Advisor”) Jared Kushner, and daughter (ahem, also “senior advisor”) Ivanka Trump were in contact with Trump during key moments of January 6. They all need to testify, under oath, and soon.

House Minority Leader Kevin McCarthy had a crucial conversation with Trump as the insurrection unfolded. McCarthy reportedly begged Trump to call off his people — interesting how McCarthy quickly recognized who the mob would take orders from — and Trump snapped back at McCarthy in response that the rioters seemed to care more about the election than he did. McCarthy claimed back in May that he would testify about this phone call in Congress if called. We shall see if he’s good for his word. I’m betting against it, and I’ll throw down a couple extra bucks on this as his bogus excuse: “I would testify, but just not in this unfair, partisan witch hunt.”

Congressman Jim Jordan reluctantly admitted, after some dodgy non-answers, that, yes, he too spoke with Trump on January 6. Pray tell, what about, Coach? And Congressman Mo Brooks recently revealed that he chose to wear body armor to the January 6 rally where he implored the crowd to “kick ass and take names.” Brooks, who was shot at during a 2017 Congressional softball practice, explained that since then he does wear body armor at certain events. He should have no problem, then, complying with a subpoena and discussing exactly why he chose to wear his bulletproof gear to the January 6 rally.

If (and, let’s be realistic, when) some or all of these people resist or defy their subpoenas, the Committee will have two primary options at its disposal. (We’re not going to spend any more time than this parenthetical on Congress’s inherent enforcement power; that historical curiosity has sat dormant for nearly 90 years, and there’s simply no way the House Sergeant-at-Arms will be cuffing and locking up, say, Kevin McCarthy in some long-lost Capitol ante-chamber.)

Back to reality. First, the House can vote to hold any subpoena-defiers in contempt of Congress. This has happened, from time to time, over the past decade, including contempt citations issued to two recent attorneys general — Bill Barr in 2019 and Eric Holder in 2012 — who refused to comply with Congressional subpoenas. Other notable contempt-ees include Commerce Secretary Wilbur Ross in 2019, White House counsel Harriet Miers and Chief of Staff Joshua Bolten in 2008, and EPA Administrator Anne Gorsuch — mother of the current U.S. Supreme Court justice — in 1982. The practical effect of these contempt citations, however, has been close to nil, the governmental equivalent of the dreaded “letter to the permanent file” that high school guidance counselors used to threaten. Tsk, tsk, shame, shame, moving along.

Congressional contempt actually need not be so toothless. In fact, Congress typically has referred its contempt cases to the Justice Department for potential prosecution for contempt of Congress (a misdemeanor punishable by a max of one year in prison). Theoretically, DOJ could bring such charges but practically, it just hasn’t — owing, perhaps in large part, to the fact that two recent contempt-ees, Barr and Holder, both were in charge of DOJ itself. Our current AG, Merrick Garland, could consider criminal charges if a matter lands before him. But given Garland’s characteristic reticence to take actions that might cause political turbulence, I’m not holding my breath waiting for him to take a big swing at a powerful subpoena-defier.

And that brings us to the final option for Congress: enforcement through the federal courts. The good news is the courts absolutely can order a witness to testify in compliance with a subpoena, and continued refusal by that witness can result in criminal contempt of court charges, which generally have more teeth than the contempt of Congress charges discussed above. And DOJ gave the Committee a boost when it declared recently that it would not assert executive privilege to contest or block testimony from Executive Branch officials about January 6. (Garland has shown a bit more willingness to rock the boat recently.)

But the problem is, simply, time. Even if the Committee’s subpoenas are well-founded, and even if the recipients hold a losing legal hand, they still can follow the old Trump-era model of hiding behind any old legal opposition and then twiddling their thumbs while the clock ticks away. For example, both John Bolton and Don McGahn passively resisted their subpoenas in 2019 by sitting back, letting Trump’s lawyers raise flimsy objections, and claiming they were just awaiting instruction from the courts as months, and years, and eventually public focus slipped away.

If this does come down to litigation, both the Committee and the courts simply must do better, and move faster. House Judiciary Chair Jerry Nadler waited four months to go to court to enforce his subpoenas, and then the courts took over two years batting around the McGahn case like a cat with a ball of yarn. Both of those delays are easily correctable. Thompson can get into court quicker than Nadler did by, well, going to court quicker; Thompson’s rhetoric seems to indicate he understands the need for speed here. And the courts simply must prioritize. Yes, our federal courts are overburdened and have large pre-existing dockets. But how about our courts adopt this simple rule: if a new case comes in that implicates fundamental balance of powers, slide that one to the top of the pile.

For all the legal issues presented here, the pivot point will be this: how quickly, and how hard, will Thompson, Cheney, and the Committee fight, and how far are Trump, McCarthy, and their allies willing to go to resist? We are about to see a monumental struggle on Capitol Hill. Much will turn on the law, but even more will come down to sheer political will. 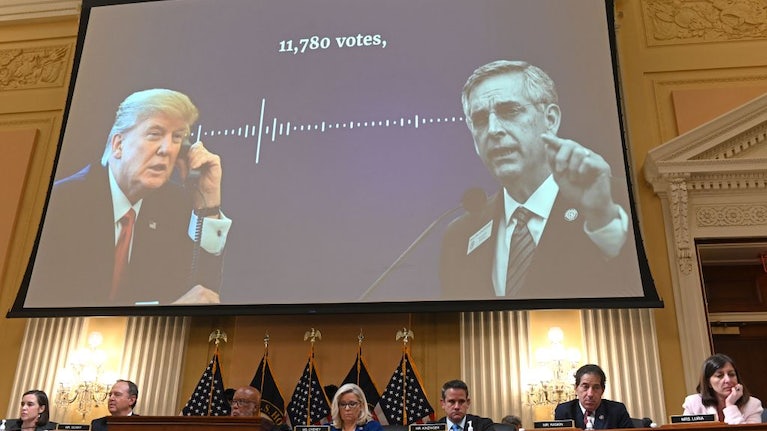 Note From Elie: The Coming Congressional Battle Over Jan 6