Durham has been at it for nearly two and a half years now — longer than Robert Mueller’s entire investigation, in fact — and now he’s got a hill of beans to show for it. Way back in May 2019, as it became apparent that former President Donald Trump would escape Mueller’s investigation essentially unscathed, Trump began to bray about the urgent public imperative for personal retribution — or, as he snappily put it, to “investigate the investigators.”

Ever the obedient lapdog, Attorney General Bill Barr jumped right to attention and assigned Trump-nominated Connecticut U.S. Attorney Durham, a veteran DOJ prosecutor, to do just that. Of course, by this point, various other investigations, including one by the Republican-controlled Senate Intelligence Committee, already had concluded that Russia interfered in the 2016 election on Trump’s behalf, that members of the Trump campaign knew about and expected to benefit from that interference and had extensive contacts with Russian nationals, and that there had been ample basis for the FBI to investigate. Alas, Trump and Barr wanted to try yet again to make their dreams come true.

Durham, the thickly-goateed would-be avenger from Connecticut, quickly became the torchbearer of Trump’s wildest political revenge fantasies. Trump hyped up the crowd like Bruce Buffer before an MMA match. “I feel it is one of the most important investigations in the history of our country,” Trump brayed. He predicted Durham would reveal “the greatest political crime in American history.” MAGA types on Twitter whooped it up, posting memes of Durham’s glaring visage with taglines like “Justice is coming” and “Knock, knock… justice!” (Oh, scary!)

Here’s how badly Trump and Barr wanted Durham to find something: they both dove into the investigation themselves, directly. Barr personally traveled to Italy, where he and Durham requested assistance from Italian officials, and he solicited investigative aid from British officials. If that wasn’t already overkill enough, “[a]t Attorney General Barr’s request, the President has contacted other countries to ask them to introduce the Attorney General and Mr. Durham to appropriate officials,” the Justice Department confirmed. I used to feel lucky if I could get two solid FBI agents assigned to a case; imagine having the attorney general and the president of the United States pounding the investigative pavement. (Actually, considering Barr and Trump: I’ll pass.)

As the 2020 election drew close, Trump agitated for Durham to put something on the table before the election — indictments, preferably, or at least a damning report. Barr, in turn, amped up the pressure on Durham to vindicate Trump’s fantasies. Alas, a principled senior prosecutor on Durham’s team resigned in protest over political meddling, and Durham stood up to Barr, refusing to expedite his investigation for political purposes. Barr backed down, but not before warning Republican officials (tellingly, only Republican officials) that Durham would not deliver the October surprise that they had so ardently wished for.

Turns out, Durham might have done Trump and Barr a favor by staying quiet before Election Day. Because if he had announced his meager findings then, it would have turned them all into laughingstocks.

Durham is now reportedly winding down his nearly two-and-a-half-year investigation. End result: two indictments. That’s right, two. None of the big game that Trump publicly fantasized about — no Comey, no Brennan, no Yates. Just two previously unknown lawyers with tangential involvement, at most, in Mueller’s work.

The first case, against mid-level FBI lawyer Kevin Clinesmith, resulted in a quick guilty plea for altering an e-mail as part of an effort to obtain a surveillance warrant on former Trump political advisor Carter Page. Clinesmith was sentenced to probation. He spent no time behind bars.

The new indictment, against a lawyer named Michael Sussman, looks shaky. Yes, the Justice Department gets convictions in the vast majority of cases it charges. Numbers vary by year, but well over 90% of federal charges typically result in conviction (virtually all of those by guilty plea). I usually tend to read a new indictment with a prosecutor-friendly eye, but this one left me puzzled.

Durham has charged Sussman with one count of making a false statement to the FBI. According to the indictment, Sussman met with FBI general counsel James Baker in September 2016 and provided him with information that purportedly linked the Trump Organization to a Russian bank. (That information never panned out.) Sussman allegedly lied when he told Baker that, in presenting the information to the FBI, he was not representing any particular client. However, according to the indictment, Sussman was actually working for the Hillary Clinton campaign at the time. That’s the crime.

While lying to the FBI is a serious crime, deserving of attention and in many cases prosecution, this charge looks dicey. The entire case comes down to Baker’s recollection. But Baker himself testified to Congress in October 2018 that he did not recall whether or not Sussman had represented himself as representing Clinton or the Democratic Party. The entire case turns on the allegation that Sussman lied to Baker. Yet Baker — essentially the only direct witness to the purported lie — testified three years ago that he could not remember what Sussman said about the key issue in the case.

As troubling as that is, it’s not even the biggest problem for the prosecution. The indictment discloses that, when Baker spoke to an FBI assistant director about the meeting with Sussman, the assistant director’s notes state that Sussman “Represents DNC, Clinton Foundation, etc.” So the crux of the indictment is that Sussman didn’t disclose to the FBI that he represented Clinton — but the FBI knew he represented Clinton anyway. That, folks, is what we prosecutors call a problem.

Even if Durham ultimately obtains a conviction of Sussman, the end result of his two-and-a-half years of investigation will be paltry, ridiculous even. Not quite Trump’s fever dream of the biggest investigation and the greatest scandal in United States history — more like a mid-level case on your average second-year federal prosecutor’s docket.

Let’s hope that Durham’s bottom line is embarrassing enough to put an end to this retributive prosecutorial garbage. Of all the damaging legacies left by Trump and Barr, the Durham investigation is among the worst. The FBI and Justice Department opened a well-founded investigation relating to Trump. He retaliated by siccing his own carefully-selected prosecutor to wreak vengeance upon those who had the gall to look into his wrongdoing in the first place. That isn’t prosecution. That’s blood vengeance.

Fair or not, nobody will remember John Durham for his long and accomplished career as a federal prosecutor. And that’s his own damn fault. Durham agreed to be part of this ridiculous sideshow, and then he took forever and a half to generate next to nothing. Now his legacy, and his permanent reminder to all of us, will be about this ugly misuse of prosecutorial power. 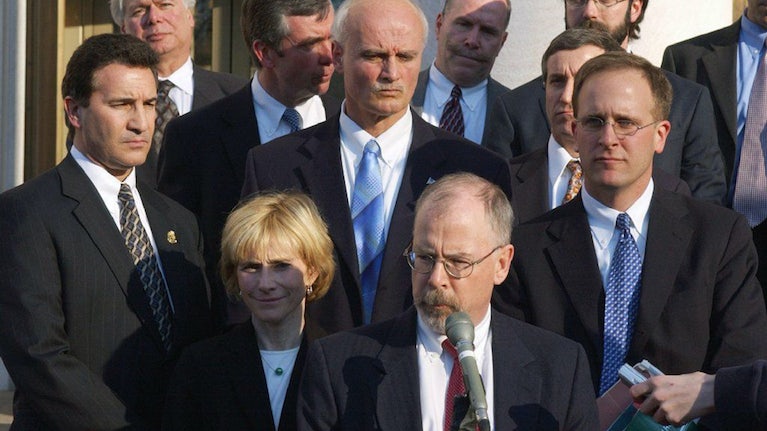 Note From Elie: The Failure of John Durham’s Investigation