Imagine, for a moment, that President Joe Biden had to make a difficult decision about foreign policy, so he reached out to former Secretary of State Madeleine Albright to talk things through and get her advice.

Or let’s say Donald Trump, while president, wanted to quietly get cutting-edge scientific advice on Covid-19, so he convened a private meeting with five of the top infectious disease experts at leading universities around the country. (It’s a hypothetical; go with me here).

Or consider a scenario where Barack Obama, faced with a perplexing military dilemma while he was president, consulted with retired General Colin Powell for wise counsel and guidance.

Now: should those conversations be protected by executive privilege?

I pose these hypotheticals because it’s a bit too easy to dismiss out of hand Steve Bannon’s claim of executive privilege — or, more precisely, Trump’s potential invocation of executive privilege with respect to Bannon. (Bannon hasn’t yet formally invoked the privilege, or any particular exception, to his Congressional subpoena; rather, he has essentially told the Committee to go pound sand, in the most general terms).

Don’t get me wrong. I am not, of course, making any kind of excuse for Steve Bannon. He’s a miserable blowhard, a con man, and a dangerous demagogue. He is absolutely wrong to defy a subpoena from the January 6 Select Committee, the House of Representatives and the Committee were right to hold him in contempt, and the Justice Department ought to charge him criminally, as I’ve written before.

But it doesn’t do anybody any good to downplay his potential legal arguments. Here’s the common refrain: “How could executive privilege possibly apply to Bannon when he didn’t even work in the executive branch at the time?” Makes sense, intuitively. It’s called executive privilege for a reason.

There is, however, a reasonable argument that executive privilege can apply when a president reaches outside the executive branch in the course of certain policy deliberations. The Justice Department examined this precise issue in 2007 and concluded that the privilege could, in fact, extend outside the executive branch. (DOJ under President George W. Bush issued this opinion in the midst of a scandal involving the politically-driven firing of several U.S. attorneys, and seemingly wanted to indulge the President’s inclination not to turn over certain relevant documents). That said, the reasoning seems sound on its face. “Courts have long recognized the importance of information gathering in presidential decisionmaking,” the opinion states, correctly. DOJ also notes that “[n]aturally, in order for the President and his advisors to make an informed decision, presidential aides must sometimes solicit information from individuals outside the White House and the Executive Branch.” And some of those communications might fairly have “occurred with the understanding that they would be held in confidence.” It’s not crazy, really.

I get that nobody much likes executive privilege (outside of presidents, and other folks in the executive branch). It’s got that permanent Nixonian stigma to it, and then Trump blew it out beyond all proportion and reason. Fundamentally, the privilege serves to keep information secret, and we instinctively recoil at that. But it also serves a legitimate purpose of enabling presidents to have sensitive conversations without worrying whether they will someday become public — as courts (up to and including the Supreme Court) and past presidents (all the way back to George Washington) have recognized. Put it this way. Think about the presidents you most admire: perhaps Washington, Jefferson, Adams, Teddy Roosevelt, Eisenhower, Kennedy, Reagan, Clinton, Bush (both of them), Obama. They all used executive privilege.

That’s not to say DOJ definitively got it right in the 2007 opinion. The issue has never come up in a federal court, so we don’t know for sure how a judge might rule. And while the idea that executive privilege could extend outside the executive branch certainly sounds nutty when you think about Trump and Bannon and their lunatic ravings, it is far more palatable if you consider the scenarios I outlined at the outset.

Trump also faces this difficulty: he’s trying to invoke executive privilege when he’s no longer, well, the executive. Again, there’s a temptation to laugh this off as senseless drivel. But that, too, would be a mistake. Would you quibble with somebody who said that “the [executive] privilege survives the individual President’s tenure”? If so, you’d need to take that up with the U.S. Supreme Court, which made this statement in a 1977 opinion, Nixon v. General Services Administration. (Yes, that’s Nixon as in Richard). Crucially, the Court also noted in that opinion that, generally, the current president is in the “best position to assess the… needs of the Executive Branch, and to [invoke] the privilege accordingly.”

Would you take issue with somebody who argued that a former president could at least have some say in an executive privilege decision? Then you’d find yourself at odds with former President Barack Obama, who issued an Executive Order specifying that a former president should be notified and should have some input in executive privilege decisions (though, like the Supreme Court, Obama gave presumptive priority to the current president). Again: Trump probably will lose, and should lose, in court. But the argument itself isn’t ridiculous, and can’t be casually brushed aside.

There’s another important limit to consider here. Even if executive privilege can extend beyond the executive branch, and even if it can be asserted by a former president, it very likely would not apply, in substance, to communications between Trump and Bannon relating to January 6. Fundamentally, executive privilege is meant to protect policy discussions — particularly those relating to “military, diplomatic, or sensitive national security secrets,” as the Court found in its 1974 decision relating to the secret Oval Office tapes created by Richard Nixon. There’s almost no plausible way Trump and Bannon were having this type of legitimate, protected policy discussions before and during the Capitol siege on January 6. In fact, the privilege specifically does not apply as a generalized shield against disclosure of evidence of wrongdoing or criminality. Again, not good for Trump and Bannon in the context of January 6.

Ultimately, I believe Bannon will lose on his executive privilege claim, if he formally raises it. But the legal argument isn’t quite as patently ridiculous as it may first appear.

And that leads to the bigger point here. Trump and Bannon have taken an otherwise sensible, legitimate notion, or at least one worthy of serious substantive debate, and have turned it into something ugly and dark. We can and must reject these tactics of Trump and his ilk. But, in the process, we shouldn’t throw away the underlying principle along with the bathwater. 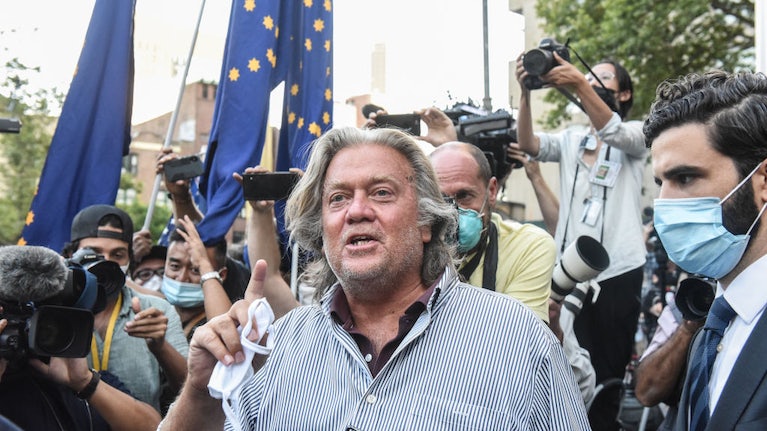 Note From Elie: “The Importance of Preserving Executive Privilege”