Let us take a moment to appreciate Rosalind Sargent-Burns.

Now, back to our guest of honor.  Rosalind Sargent-Burns is the current “acting” Pardon Attorney for the United States Department of Justice.  I put “acting” in quotes because it’s odd that she would be so designated.  The Pardon Attorney is not a Senate-confirmed position, so there’s no formal process to distinguish “acting” from fully-vetted.  And she has been in office since May 2019, so she’s no temporary placeholder.  Then again, we know the Trump administration prefers to tag its officials with “acting” titles; as the President himself once said, “I sort of like ‘acting.’  It gives me more flexibility.  Do you understand that?  I like ‘acting.’”

I want to be clear here: there is zero sarcasm in my appreciation for Rosalind Sargent-Burns.  I don’t know her but she appears to be the prototypical, hardworking, non-partisan, dedicated career public servant who makes the Justice Department great and strong and independent.  She has worked in DOJ’s Office of the Pardon Attorney for over 12 years, since 2008 — meaning she has served through essentially the entire administrations of both Presidents Barack Obama and Donald Trump.  Over the years, she has held important supervisory positions within the Office.  According to her official DOJ bio, she is “an active participant in the Department’s pro-bono program and multiple community volunteer efforts.”  When folks talk about “dedicated career public servants,” they’re referring to people like Rosalind Sargent-Burns.  The Notorious RSB, if you will.

The division led by Sargent-Burns, the Office of the Pardon Attorney, has existed in some administrative incarnation or other since the mid-1800s.  Its self-declared mission is straightforward: “All requests for executive clemency for federal offenses are directed to the Pardon Attorney for review, investigation, and preparation of the Department’s recommendation to the President.”  At least, that’s how it ought to be.   The problem is, the Pardon Attorney’s mission statement has, under Trump, become more aspirational than reality.  Indeed, all requests for clemency (meaning full pardons and sentencing commutations) traditionally have been, and should be, directed to the Pardon Attorney for careful review and recommendation.  But Trump has essentially ignored RSB and her staff.

In February 2020, the Washington Post found that “[m]ost of Trump’s grants of clemency have gone to ­well-connected offenders who had not filed petitions with the pardon office or did not meet its requirements.”  Trump has issued only 38 grants of clemency during his nearly four years as president — though that number is sure to spike during his final weeks in office.  Purely by volume, Trump has actually been quite light on pardons, compared to his predecessors.  President George W. Bush issued 200 acts of clemency (in two terms, versus Trump’s one).  President Obama (also over double the time in office compared to Trump) issued over 1,900 pardons or commutations — the majority to nonviolent drug offenders.

The problem, of course, lies in how Trump has exercised the pardon power.  The phrase “willy-nilly” gives Trump too much credit because it at least suggests some manner of randomness.  Instead, Trump seems to be interested in targeted clemency only for certain types of people: celebrities, right-wing  political martyrs, personal acquaintances, and whatever ball of yarn is being dangled in front of him by a celebrity or friend at the moment.

Trump’s very first pardon went to Joe Arpaio, the racist sheriff who violated a court’s order against enacting racist policies (as racist sheriffs are wont to do).  Trump later granted clemency to a bizarre mishmosh of humanity: Scooter Libby (the convicted former Chief of Staff to Vice President Dick Cheney), Rod Blagojevich (the disgraced former governor of Illinois, convicted of various public corruption offenses), Roger Stone (you remember, the guy with the back tattoo of Nixon who tried to help Trump coordinate with Russia over Wikileaks), Dinesh D’Souza (the commentator whose greatest career accomplishment, to hear him tell it, is that he was convicted of a federal felony by the SDNY and then pardoned by Trump), Michael Milken (the former Wall Street mogul convicted of securities fraud by the SDNY in the 1980s), and Bernie Kerik (the disgraced former NYPD commissioner convicted — also by the SDNY — of tax fraud).  Just to accentuate the boldface name-seeking, pointlessly-pandering nature of it all, Trump also pardoned Jack Johnson (the long-deceased champion boxer) and Susan B. Anthony (the long-deceased equal rights activist).  (I suspect neither of them would’ve been big fans of Trump’s.) I’ll give you a second for your head to stop spinning after reading that list.

Even one of Trump’s more traditional, well-justified pardons, to Alice Johnson — who was serving a life sentence for non-violent drug offenses — happened only because sparkly celebrity Kim Kardashian brought the matter to Trump’s fleeting attention.  What becomes of the thousands of other inmates serving unjustifiably long sentences for non-violent offenses, those who don’t have a friend who can catch the President’s eye on TMZ?

But presidents going back to the 19th century have observed the norm — the unwritten rule — of considering input from the Pardon Attorney.  The general notion is a prudent and sensible one: pardons are precious and highly sought-after, so we ought to observe some process designed to promote fairness in their application.  Obama, Bush, and many presidents of both parties before them let the Pardon Attorney do his or her work.  But Trump has ignored this important norm, and left Rosalind Sargent-Burns with essentially nothing to do while he carelessly tosses pardons into the crowd as a source of fleeting self-amusement, like so many rolls of paper towels on a hurricane-ravaged island.

Rosalind Sargent-Burns doesn’t do much press, keeping with the tradition of the humble DOJ employee.  A Google search turns up next to nothing.  But I did stumble on one 2019 interview that she gave to her alma mater, Drake University.  In it, she talked about her decision to go into the law: “It may not be the easiest road, but if you’re passionate about what you do, it is so rewarding.  Whatever the task, whatever it entails — from the mundane to the monumental — passion and belief in what I do is the force that drives me.”  And at one point, the Notorious RSB seemed to throw a bit of subtle shade at the Trump administration.  When asked about the hardest part of her job, she responded, “Perception… public perception about the DOJ and those of us in it may change from news article to news article, but our reality and commitment does not.”

Here’s my hope as the Biden administration prepares to take over.  This will, undoubtedly, fall quite low on the list of pressing personnel matters.  Nonetheless: keep Rosalind Sargent-Burns in place.  Drop the “acting” and let her be the Pardon Attorney, no qualifiers.  And let her do the important job she is there to do.  It won’t get any headlines.  But it will be a small, solid step towards restoring vital norms.  It will be a simple move towards good government. 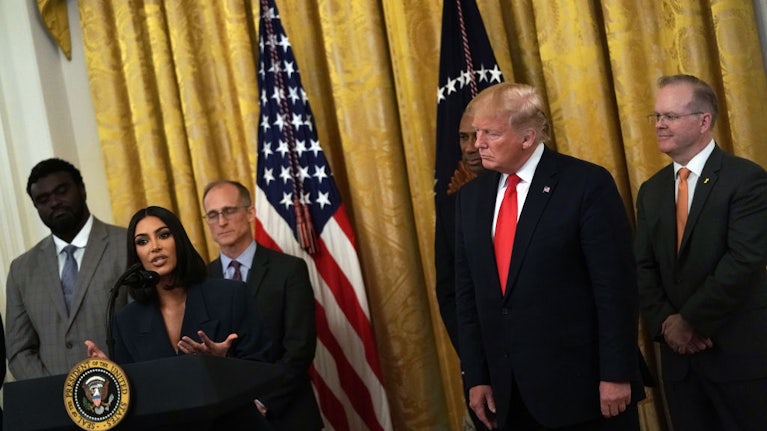 Note From Elie: The Notorious RSB