What happens now with the “other three”?

What will become of former Minneapolis police officers Tou Thao, Thomas Lane, and Alexander Kueng, all of whom face charges for aiding and abetting Derek Chauvin’s commission of murder and manslaughter against George Floyd?

No doubt, the party line for the Minnesota prosecutors who successfully tried Chauvin to a resounding across-the-board conviction is something like, “We are preparing to try the remaining defendants on August 23, 2021, as scheduled.” But I also suspect the behind-the-scenes reality is a bit different than this straightforward “Bring ‘em on” approach.

Here’s the calculus from the prosecutors’ perspective. They’ve now convicted Chauvin, who was, by far, the top priority. Chauvin was the one who pressed his knee into Floyd’s neck for the now-infamous 9:29.  Chauvin was the one who choked off the oxygen from Floyd’s brain, who showed something between utter callousness and sadistic satisfaction at Floyd’s suffering, whose sneering visage is now burned in the public consciousness. Now that the jury has spoken, Chauvin will spend much, and possibly all, of the rest of his life behind bars (more on the upcoming sentencing in a bit).

But prosecutors face a more difficult task proving the guilt of the “other three.” While “aiding and abetting” is a common and legitimate legal theory — I’ve charged it plenty of times — it’s also, by nature, one step removed from the physical commission of the crime (here, the knee to the neck). It’s not enough under the law merely to prove that the other three officers were present, or should have done more, or acted irresponsibly or reprehensibly. Prosecutors must prove that each of the other three officers intentionally and knowingly helped Chauvin commit murder or manslaughter. And of course, the jury must find guilt unanimously, and beyond a reasonable doubt.

That’s not going to be easy. There’s a real risk for prosecutors that a trial of the “other three” will result in acquittals or a hung jury. As Chauvin knelt on Floyd’s neck, Lane held down Floyd’s legs and Keung was on his back, while Thao primarily stood nearby and kept the crowd of bystanders away. All seem to have done wrong, but proving intent to aid and abet murder or manslaughter is trickier than the case against Chauvin. Two of the “other three” (Lane and Keung) were rookies in their very first week as police officers. At one point, Lane suggested rolling Floyd on his side; when Chauvin refused, Lane responded that he was worried Floyd might be having a medical issue. Lane and Keung at various points tried to find a pulse on Floyd.

Again, it must be said: none of this is to make any excuse for the actions of the “other three” on May 25.  But prosecutors have to assess these limitations to make a full and reasonable assessment of the strength of the case.

So here are your options if you’re the Minnesota prosecutors. Option A: Try the “other three” and hope for the best. The upside is you give no ground, you stick to your guns, you make your case, and you give it to the jury. The downside is the very real risk of acquittals or a hung jury, which would be disastrous — both in terms of obtaining justice for those responsible for Floyd’s death, and in the eyes of the public.

Option B: Work out plea deals with the “other three.” Let me make clear here: I do not mean light, non-incarceratory plea deals to probation or the like. I mean plea deals that will send each of the “other three” to prison, for several years. The downside is that some in the public, maybe even many, might second-guess the decision and accuse the prosecutors of going soft. But I suspect that derision will be fleeting, given that Chauvin already will be behind bars for a long time, and that, under the terms of my proposed plea deals, the “other three” will do meaningful time as well. The upside, of course, is that prosecutors lock in convictions for the “other three,” ensure that everybody does some significant time behind bars, and wrap the case up without risk of acquittals or hung juries.

Of course, it takes two to plead guilty. Will the “other three” be willing, and interested, in taking their medicine voluntarily and admitting their guilt? I suspect they will, though much turns on the eventual sentencing of Chauvin. Chauvin faces a maximum sentence of forty years in prison. But the Minnesota guidelines yield a recommended — not mandatory — sentence of only twelve and a half years (in part because this is Chauvin’s first criminal conviction, which places him in the lowest “criminal history” category).

Prosecutors have already informed the court that they will argue that five aggravating factors apply, and should push the judge towards imposition of a higher sentence: (1) Floyd was particularly vulnerable (because he was handcuffed), (2) Chauvin displayed particular cruelty in the manner of killing Floyd (the knee to the neck for 9:29), (3) the crime involved three or more participants (the “other three” officers), (4) Chauvin abused a position of official authority (as a police officer), and (5) the crime was committed in the presence of children (the minor eyewitnesses who testified at trial). It will be up to the judge to determine the applicability of these aggravating factors; the more he finds, the higher he can go.

So Chauvin realistically could be sentenced to anywhere from a decade or so up to the full 40 years. And the more time the judge gives Chauvin, the more incentive the “other three” will have to plead guilty.  Let’s assume the judge sentences Chauvin to 40 years, or 35, or 30. The “other three” might rationally calculate that, if convicted at trial, they’re unlikely to get as much time as Chauvin, but still could be looking at a couple decades behind bars. That’s got to be a terrifying proposition. If prosecutors came along and offered a plea for, say, eight years — they would have to think hard about taking the offer and capping their risk.

Trials are captivating, and they’re often necessary in our system, as we just saw with Chauvin. Yet the vast majority of criminal cases — now over 95% — result in guilty pleas. That’s largely a function of basic risk calculus.  Here, those incentives can, and perhaps should, push all parties together for a guilty plea. Prosecutors guarantee convictions against the “other three” and send them to prison for meaningful terms, while avoiding the potentially catastrophic risk of a bad verdict. And the “other three” take responsibility for their actions, serve their time, but avoid a roll of the dice that could land them behind bars for much or all of their remaining lives.

This is when guilty pleas happen: when both sides have something big, and scary, to lose. 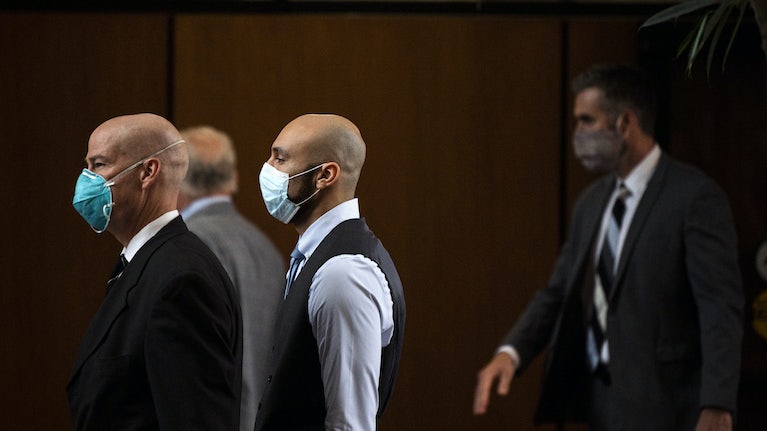 Note from Elie: The Other Three Officers Charged In George Floyd’s Killing