More than half the Supreme Court spent its summer recess on a publicity jag. All is well, the justices assured us in between terms, we’re above the political fray and it’s the media’s fault if you think otherwise. I’m not buying it. If anything, the justices have undermined public confidence in the Court with their condescending, ham-handed PR campaigns.

There’s a fair debate about whether the justices should be out in public making extra-judicial comments about how the Court works, or whether they should remain above it all, cloistered in chambers and speaking through their formal opinions rather than on TV. Now, I’m no luddite when it comes to the judicial system. If anything, our courts need to do better at getting with the times: livestream proceedings, electronic filing and accessibility to documents, cameras in the courtroom — I’m for it all, and it’s way overdue. Only when Covid hit did the Supreme Court in 2020 finally relent and allow live audio streams of oral arguments. Guess what? It went fine, the sky didn’t fall, and the Court and the public alike are better for it. Lower courts have followed suit, to a degree, as some proceedings are now available to the public remotely.

But some of the court’s traditional practices — and abstentions — are well-advised, and necessary. Generally, judges don’t comment publicly on pending or upcoming cases, or on anything at all. It’s exceedingly rare to see a federal judge at any level grant a media interview. The widely-observed practice of refraining from public commentary is probably for the best in terms of preventing potential conflicts of interest and in preserving the court’s image as a neutral arbiter. As one federal judge in the SDNY used to say when explaining to jurors that they shouldn’t talk about the pending case with their family and friends during weekend breaks: “A little less history and a little more mystery can be a good thing.”

But, suddenly: forget about mystery. Now we’ve got Supreme Court justices dropping books, doing media tours, cultivating their personal fame and fortune. Justice Neil Gorsuch wrote a bestseller last year  called A Republic, If You Can Keep It. (I think we can retire that quote for a bit; just let it rest.) Justice Stephen Breyer has a brand new book titled, ostentatiously, The Authority of the Court and the Peril of Politics, plus a promotional media tour. Justice Amy Coney Barrett reportedly has inked a book deal for $2 million. Justices Sonia Sotomayor and Clarence Thomas also have written memoirs since joining the Court, years ago. Chief Justice John Roberts and Justices Samuel Alito, Elana Kagan, and Brett Kavanaugh have refrained from writing, thus far at least. (Still not clear where the money came from to retire Kavanaugh’s massive debt, by the way.) We now have a cross-ideological five-to-four majority of justices who have signed book deals and made some scratch off their positions. Some things can, in fact, bring together the Court’s ideological factions.

This has been the core assurance made recently by the suddenly media-savvy justices: don’t worry, we’re not self-promoters and, heavens to Betsy, we are most certainly not at all political. Balls and strikes and whatnot. Breyer writes in his book that “A judge’s loyalty is to the rule of law, not the political party that helped to secure his or her appointment.” Thomas lamented, “I think the media makes it sound as though you are just always going right to your personal preference. So, if they think you are anti-abortion or something personally, they think that’s the way you always will come out.” Alito attacked media coverage of the Court and defensively proffered that the justices are not a “dangerous cabal.” Barrett announced last week in conclusory fashion that “this court is not comprised of a bunch of partisan hacks.”

Here’s the problem. The justices are used to a cloistered world where something is because they say it is. As the famous quote goes, the Court isn’t final because it is infallible; it’s infallible because it is final. But things don’t play that way outside the marble judicial palace. In the real world, we don’t have to accept that the Court is apolitical simply because the justices say so.

We remember Bush v. Gore in 2000, when all five Republican-appointed conservatives suddenly took an anti-states rights position to favor their guy while all four liberals did the opposite. Or we can look back just a few months to July 2021, when all six Republican-appointed conservatives upheld restrictive voting laws in Arizona, while the three Democratic-appointed liberals dissented. Or we can think back just a few weeks, to when five conservative justices bound together and declined to temporarily stay a Texas abortion law that openly flouts the Court’s own precedent established 48 years ago in Roe v. Wade, purportedly on purely procedural grounds. Or we can view wide-lens analytical data showing that the justices are predictable — not perfectly, but far more reliably than if they were truly independent — based on their established political ideology.

Only one justice, Sotomayor, is giving it to us straight, if a bit outside the Supreme Court’s traditional facade of gentility. In a recent speech at an American Bar Association event, she predicted boldly, “There is going to be a lot of disappointment in the law, a huge amount,” she predicted. (Note that such a prediction would be impossible if the justices were in fact truly independent, non-political actors.) “You know, I can’t change Texas’s law,” Sotomayor said in reference to the aforementioned abortion case, “but you can and everyone else who may or may not like it can go out there and be lobbying forces in changing laws that you don’t like.” Sotomayor seemingly caught herself violating the generally understood prohibition on commenting on pending cases, though the Texas matter is not technically before the Court at the moment. “I am pointing out to that when I shouldn’t because they tell me I shouldn’t,” she said. “But my point is that there are going to be a lot of things you don’t like.”

Sotomayor has had it, and she’s not playing. She went too far in discussing a specific case, extra-judicially, and she overstepped traditional norms in speaking so bluntly about what’s to come this term. But she provided a necessary counterweight for her outspoken colleagues and candidly acknowledged what we all understand: of course politics and ideology matter, and it’s about to get ugly for the Court’s liberals.

So, with all due respect to Breyer, Thomas, Alito, and Barrett: you can claim the Court is not political all you want. Maybe make a buck or two along the way. But it’d be far more convincing if the Court actually acted like it. 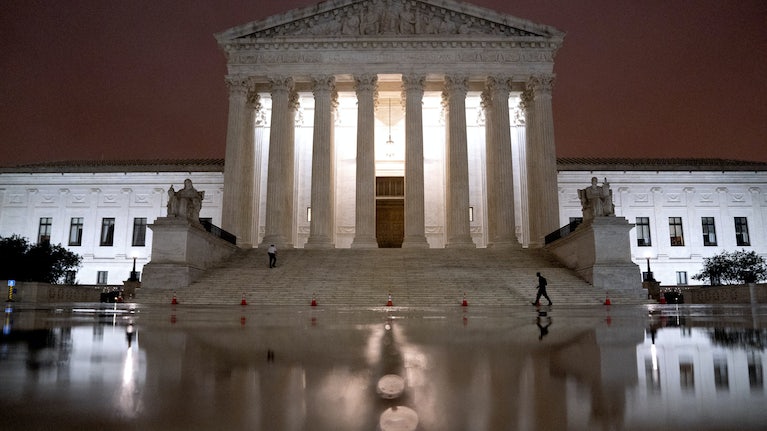