Over my fourteen-plus years as a federal and state prosecutor, I handled cases against hundreds of defense lawyers, maybe more than a thousand.  Among that group, I encountered what I once thought to be the entire spectrum of legal capability.

I faced off against defense lawyers so good, so precise and focused and persuasive that they were able to win acquittals in the face of powerful evidence, or to obtain sentences well below what I would have imagined possible.  Those elite defense attorneys forced me to raise my own game; you tend to sharpen up if you know your adversary will capitalize on any errors.  (I feel compelled to say that many of these top-shelf defense lawyers were public defenders, contrary to the silly stereotype of the frazzled, ineffectual public servant.)

I also did cases against plenty of unspectacular but rock-solid defense lawyers, those cagey veterans who knew and could execute all the basics — maybe without much flair but competently, reliably, and effectively.

And, at times, I saw opposing counsel who were just plain bad.  During one appellate argument, a defense lawyer wasted three of his allotted seven minutes setting up a laborious joke — it had to do with Sarah Palin and her famous quip about putting lipstick on a pig, if you remember that — prompting a normally staid appellate judge to deadpan, “Counsel, please do not waste our time, and your own, with lame jokes.”  I’ve seen lawyers make arguments so bad that you can see jurors furrowing their brows and recoiling in their chairs.  I’ve seen lawyers make tactical mistakes, inexplicable strategic blunders, and outright errors of law and fact.  (For the record: prosecutors are immune to none of this.)

So yeah, I’ve seen some ugly, cringeworthy, just plain bad lawyering.  But the quality of advocacy we’ve seen recently from those lawyers representing the Trump campaign in its effort to challenge the results of the 2020 election is something different altogether.  It’s not merely poor or substandard lawyering.  It’s off the charts and almost aggressively terrible, far beyond anything else I’ve seen in my career.  Worse, this performative, substance-free, conspiracy theory-slinging lawyering by Team Trump is happening in the bright public glare, dragging down the entire profession.

Let’s run through some lowlights.

In one case in federal court in Pennsylvania, the Trump campaign’s attorney claimed that Republican election observers had been excluded from the ballot counting area.  When the judge pressed back, however, the attorney responded that the Trump campaign in fact had “a nonzero number of people in the room.”  (I’m going to use this in real life sometime: “I had a nonzero number of beers last night.”)

The judge, voicing the exasperation felt by millions, responded, “I’m sorry then, what’s your problem?”  The judge’s retort was perhaps purposefully ambiguous: he might have meant “what’s your problem” as in “what’s the nature of your legal complaint?” or he might have meant it as in “what’s wrong with you?”  I’ll leave it to the reader to decide.

In another case advocated Rudy Giuliani, Jenna Ellis, and the self-styled “elite strike force team” — more aptly described by Republican Chris Christie as a “national embarrassment” — a federal judge ridiculed one of the Trump team’s primary constitutional claims as a “Frankenstein’s monster [which] has been haphazardly stitched together.”   It takes some truly terrible lawyering to turn a federal courtroom into a full-on roast, complete with insulting cultural references.

Not wanting to miss out on the action, a unanimous three-judge federal appellate panel — with two judges nominated by President George W. Bush and the third by Trump himself — ruled curtly, “[c]harges require specific allegations and then proof.  We have neither here.”  Burned.  (Note that Ellis did not actually formally appear as an attorney on the case, keeping with her demonstrated tendency to make bold proclamations about the law without ever actually stepping foot in a courtroom in any meaningful case; read this scathing New York Times expose about how, to put it charitably, Ellis is “not the seasoned constitutional law expert she plays on tv.”)

In another case, Trump’s attorneys cited data allegedly supporting their claims of voting impropriety in Michigan.  Problem was, the attorneys included data from Minnesota which, for the record, is not Michigan and is not in Michigan.  Look, I’ve practiced law everywhere from Dallas, New Jersey to Seattle, New York, and I know: geographic accidents can happen to anybody.  (See what I did there?)

In another Michigan case — this one actually occurring within the state of Michigan, so nice work there — the Trump campaign tried to support its claims of impropriety by citing a witness who had heard something from another unknown individual, who had heard it from “other hired poll workers at her table.”  The judge could hardly hide her disgust at this attempt to bootstrap multiple layers of hearsay into actual proof.  “Tell me how that is not hearsay.  Come on now!” the judge said from the bench.  Take it from an experienced trial lawyer: you don’t often hear a judge explicitly proclaim, “Come on now!”

In a Georgia lawsuit, the Trump campaign claimed that 53 ballots — nearly enough to account for 1/225th of Biden’s 12,000-plus vote margin of victory in that state — had been counted even though they had been cast after the deadline.  But both of the Trump campaign’s witnesses testified they did not actually know when the ballots had been received — sort of a critical point — and two other witnesses who actually worked for the local board of elections confirmed that the ballots had been received on time.  The judge dismissed that case with a curt but entirely appropriate eight word ruling: “I’m denying the request and dismissing the petition.”  Don’t let the door hit you.

Not to be outdone, the U.S. Supreme Court weighed in this week with a one-line rejection of its own: “The application for injunctive relief presented to Justice Alito and by him referred to the Court is denied.”  Not a single dissent was noted on the record — and that’s with a 6-3 conservative majority on the Court, including three of Trump’s own nominees.

And I’m not even going to get into the extra-judicial stuff — the hilariously awful press conferences held at landscaping companies and national political committee headquarters (at least the landscaping company made them do it out in the parking lot), the “hearings” conducted in hotel ballrooms, and whatever you want to call the trainwreck that Giuliani conducted before the Michigan legislature that was so hilariously bad, even a biting Saturday Night Live skit couldn’t quite do it justice (an “after-David”…).  Some things are beyond satire.

I write this not entirely to poke fun at the Trump campaign’s lawyers.  (But, yeah, that’s definitely part of it.)  What stands out to me is that the lawyers for Trump and his campaign have divorced themselves entirely from reality and from the rules and standards of the courtroom to such an extreme that it almost seems the defiance of facts, law, logic and norms has become the very point of it all.  It’s as if the strategy boils down to: we’re making absolutely madcap claims, so our lawyering might as well match.

With the Trump presidency nearing its end, we soon will go through a national re-calibration.  I believe we will see a return under the Biden administration to many of the vital political norms and practices that have developed over many decades, across administrations of both parties.

And that movement back towards established norms should not be limited to the political realm.  We also need to get back to the basics of good and decent lawyering.  That’s not to say everybody must be a genius or a superstar; like any profession, lawyering covers a wide range of professional capability.  But this new brand of lawyering that we’ve seen emerge recently — the fact-free, anger-driven nonsense that has become more performative than substantive — we need to cast that out, once and for all. 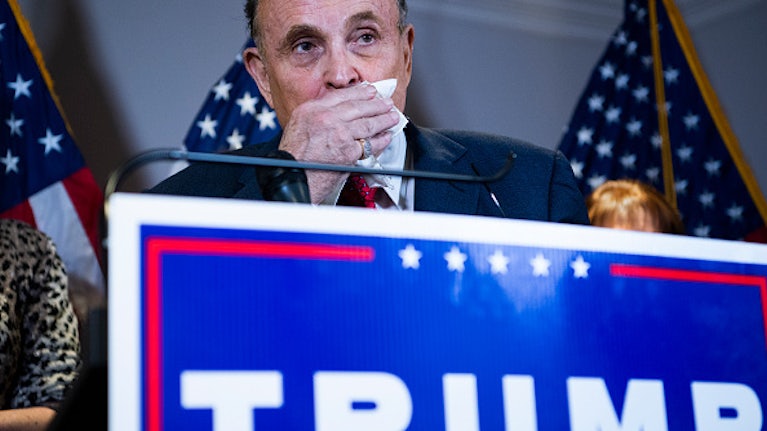 Note From Elie: The Worst Lawyering I’ve Ever Seen