My Account
|
Log Out
join insider
Already a Member? Login
MY ACCOUNT | LOG OUT
LOGIN JOIN INSIDER
Listen to the CAFE Insider podcast
A weekly Note from Elie is part of the CAFE Brief, and Insider members can listen to a recording of the note the same day. Please enjoy Elie reading this week’s note, “Trump’s Legal Fantasy Land,” and read his note in your inbox every Friday.

President Donald Trump’s magical thinking approach to the law has taken a dark turn.  Trump has long regarded the law as an exercise in wish fulfillment and sheer force of will: if I just wish it hard enough, and repeat it enough times, it will become so.  But now this tendency — to distort the law and use it as a crude shortcut to achieve his political whim of the moment — has gone from a strange exercise in childlike make-believe to something more sinister.

Trump, it seems, is a disciple of the “just make it up and act like it’s real” school of legal scholarship (with a minor in the “I heard it somewhere” doctrine).  There certainly is plenty of grey area in the law, and lawyers and politicians alike sometimes push the outer limits.  But recently, Trump has simply conjured his own legal fantasyland.  Just in the past few weeks, he has tried to force the world to conform to his delusional views on issues as varied and serious as separation of powers, freedom of speech, and racial inequality and the resulting nationwide protests.  Let’s break it down.

Separation of Powers.  As the Coronavirus exploded and state governors began to impose stay-home orders and other restrictions designed to save lives, Trump declared imperially that he holds “ultimate power” and that “When somebody is the president of the United States, the authority is total and that’s the way it’s got to be. … It’s total.”  Days later, Trump contemplated that he might “override” governors on closure orders.

Fortunately, we’ve got a Constitutional Amendment — the humble Tenth — that plainly contradicts Trump’s claim by reserving all powers not specifically granted to the federal government to the states.  And even if there was some federal power to police public health and safety, that power would sit with Congress, not with the President alone.  Trump’s monarchic absolute-power declarations felt like the climatic scene in a movie where the deranged leader goes completely over the edge, mad with power.  Turns out, this was just a ginger warmup for what was to follow.

Freedom of Speech.  Next, Trump turned his fire from the Tenth Amendment to the First.  Days after Twitter slapped a fact-check label on a Trump tweet that pushed wild fantasies about massive fraud in mail-in voting, Trump had a full-blown temper tantrum.  He promised “big action” against Twitter and other social media companies — and then delivered a limp Executive Order that reads more like a meandering, disjointed law school exam by a student who didn’t really do the reading than the kick-ass decree of Trump’s dreams.

The Order declared that the Communications Decency Act of 1996, which gives social media platforms broad immunity against defamation lawsuits, should be “reinterpreted.”  (Quick law school lesson: Executive orders do not override laws.  Class dismissed).  And that’s the Order’s lead provision, its hardest-hitting measure; the rest is window dressing and administrative techno-babble.  Even the title — “Executive Order on Preventing Online Censorship” — bleeds hypocrisy: a governmental order that explicitly aims to punish a private media company for fact-checking the President claims that it actually “prevents” censorship.

Beyond its legal infirmity, the Order is worth a look for its sheer strangeness.  It goes on a Mean Girls burn-book style score-settling rampage.  In this official document — actually printed on White House letterhead and forever to be housed in presidential archives– Trump whinghes that Twitter picks on him; that Twitter really should be picking more on Rep. Adam Schiff and the “Rusian Collusion Hoax” (notably, just as newly-released transcripts show Michael Flynn explicitly plotting with the Russian ambassador to undermine national interests); and that one Twitter official has expressed political views in his own tweets (the horror; a private citizen has political views).

Racial Inequality and Protests.  As the nation exploded with protests over the killing of George Floyd by Minneapolis police officers, Trump offered a mind-boggling series of tweets that sowed discord and inflamed tensions.  Within his baffling tweet rampage, Trump threatened to deploy the military’s “unlimited power.”  The military does not, of course, hold “unlimited power” — if it did, we’d be a very different country.  Among other things, the military cannot make civilian arrests without specific statutory authorization.

Then, as the nation reeled and protests raged, Trump took the useless and legally fantastical step of announcing by tweet that “The United States will be designating ANTIFA as a Terrorist Organization.”  But designating a group as a domestic “terrorist organization” is, as the kids say, “not a thing.”  Federal law does permit the government to designate a foreign terrorist organization, and there are real legal consequences to such a designation.  But there simply is no such law relating to domestic groups.  While a federal statute defines the term “domestic terrorism,” there is no legal process to designate domestic terror organizations, and no consequences whatsoever for such a designation.  Trump’s bold “designation” is an empty effort to sound strong and decisive while accomplishing nothing beyond political posturing.

Trump did actually get the law right — but just about everything else wrong — when he threatened to invoke the Insurrection Act of 1807 to deploy the military to police the streets of the United States.  The centuries-old law does permit the President to deploy federal troops in certain delimited circumstances: where requested by a state governor, where necessary to “suppress” insurrection or  rebellion, or where required to prevent obstruction of federal or state laws.  But Trump’s announcement of his plan — minutes after federal forces attacked peaceful protesters outside the White House to clear out a path for a ridiculous photo op in front of a church — was wrong on every level.  Trump used the law as a prop in a pathetic strongman act.  And, thus far — four days after Trump’s chest-pounding, militaristic decree — he has not actually deployed federal troops domestically beyond Washington DC in any significant manner.

What’s behind Trump’s legal fantasticism?  It could be that he simply doesn’t understand the law.  Perhaps his staff of smart, able lawyers lacks the courage to tell him he’s wrong.  Maybe they try but he ignores them.

But I think it’s more likely that he just doesn’t care.  Start with the goal — blame somebody else for a problem, take credit for an achievement, distract or deflect or inflame — and then say whatever is necessary to get there, even if pure fantasy.  We accept this, to a degree, when it comes to politics.  But the law is supposed to give some form, some structure, some boundaries to public life.  And, as our problems have escalated at a dizzying pace over the past few weeks, Trump’s legal mythmaking has intensified.

We’re past the point where it’s sufficient to ridicule Trump’s ignorance and contempt of the law, to roll our eyes and chuckle at Trump being Trump.  Now, we need to recognize Trump’s contempt for the law for the danger that it truly is. 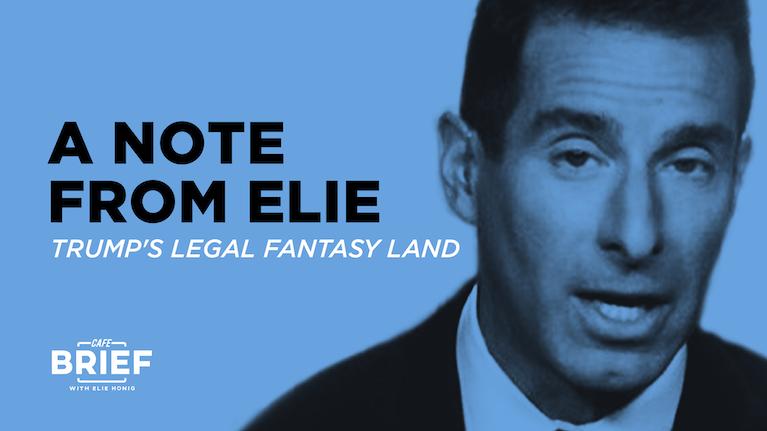