The future of voting rights in the United States will go one of two ways, and soon. Either the Democrat-controlled U.S. Congress will pass legislation preserving and expanding access to voting nationwide, or else Republican-controlled state legislatures across the country will have a field day rolling back those protections. This is straight-up, zero-sum politics, and the future of voting itself is in the balance.

Constitutionally speaking, congressional Democrats have the upper hand. Under Article I, each state legislature holds the power to determine its own manner of voting, “but the Congress may at any time by law make or alter such regulations.” So it’s generally up to states how to hold their elections — but Congress can override the states and set national standards, if it cares to do so.

Will Congress exercise its long-dormant, rarely-deployed constitutional power over elections? The Democratic-controlled House already has passed HR-1, a sweeping bill that would impose broad nationwide standards to increase access to voting. Among other things, HR-1 would: create a new national automatic voter registration system that requires voters to opt out rather than opt in; require at least 15 consecutive days of early voting for federal elections; and prohibit states from restricting a person’s ability to vote by mail.

But the problem for Democrats lies in the Senate, where the filibuster threatens to derail HR-1. As originally conceived, the filibuster empowers any member to stand up in the well of the Senate and stall for time by reading the phone book or singing an aria, or doing whatever it takes to keep talking and hold the floor to prevent a vote, at least temporarily. It’s a noble idea: let the individual Senator with a strongly-held objection have a say and at least gum up the works. Picture a sweaty, disheveled, Jimmy Stewart filibustering for 24 straight hours to block a corrupt appropriations bill in Mr. Smith Goes to Washington.

Alas, the Hollywood convention is simpler than reality. The Senate no longer requires its members to actually stand in the well of the chamber until the point of exhaustion; rather, now, any Senator can simply declare an intent to filibuster. And the only way to override a filibuster is with 60 votes — meaning the 50 Democrats (or 50 Republicans) in the Senate would need ten members of the other party to join them. There’s simply no way that happens on HR-1; it’s unlikely that even a single Republican Senator votes for it, never mind ten. Here’s how much Senate Republicans detest (and perhaps fear) HR-1: Senator Mike Lee of Utah proclaimed to Fox News that “[t]his is a bill as if written in hell by the devil himself.” (Lee does not specialize in understatement.)

Democrats are considering various methods to eliminate, modify, or evade the filibuster rule, but so far no consensus has emerged on whether and how to do that. The big-picture concern is that ending or limiting the filibuster for HR-1 could set a precedent that comes back to bite Democrats in the future, if and when they become the minority party again.

If Congress doesn’t act, rest assured, the states will. According to the Brennan Center for Justice, legislatures in 43 states are currently considering 253 bills that would restrict voting rights (a different set of 43 states is considering 704 bills with at least some provisions that would expand access to voting, including many that are contained in HR-1). States with Republican-led legislatures currently are drafting and advancing bills that would limit or eliminate early voting; eliminate “no excuse” systems (where voters can cast ballots by mail for any reason at all) in favor of “for cause” systems (where voters must have some disability or other recognized reason to vote by mail); ramp up voter identification requirements; restrict when and where voters can register; and limit the number and location of polling locations. Shorter version: if there’s some way to make it harder to vote, then it’s in a Republican-sponsored bill pending somewhere in the United States.

Crucially, any bill passed by Congress would preempt and override any conflicting state law. For example, the Georgia Senate has passed a bill that would eliminate “no-excuse” voting by mail and replace it with a “for cause” system. This undoubtedly would drastically reduce the number of mail-in votes cast in Georgia. For perspective, approximately 1.3 million Georgians voted by mail in 2020 under the “no excuse” system. Approximately 850,000 of those votes went Democratic and 450,000 were for Republicans — a net of about plus-400,000 votes for Democrats. Joe Biden won Georgia by about 12,000 votes total, and Democrats Raphael Warnock and Jon Ossoff won Georgia’s two Senate races by under 100,000 votes each. You can do the math. But remember: if Congress passes HR-1, it will definitively end Georgia’s attempt to restrict mail-in voting.

If HR-1 fails, Democrats surely will bring legal challenges to Republican-led efforts to restrict voting in the states. But it would be foolhardy for Democrats to expect much help from the courts. The U.S. Supreme Court currently is divided between six proven conservatives (Chief Justice John Roberts plus Justices Clarence Thomas, Samuel Alito, Neil Gorsuch, Brett Kavanaugh, and Amy Coney Barrett) and three established liberals (Justices Stephen Breyer, Sonia Sotomayor, and Elana Kagan). Even if Roberts or another conservative flips over and joins with the liberals — and there’s little indication any would do so on a voting rights case — the conservatives still have the majority by a 5-4 count.

Conservatives can argue in good faith that some level of election security is necessary, and that voting should not be an unregulated (or, under-regulated) free-for-all. However, Republican efforts to roll back access to voting have recently taken on a more extreme, more cynical flavor. One Republican lawyer recently admitted to the Supreme Court that, to some extent, Republicans rely on narrower voting laws to help them win elections. A less regulated system, he argued, “puts us at a competitive disadvantage relative to Democrats… [p]olitics is a zero-sum game.” Give the attorney some credit for putting it right out there: Republicans need to restrict the vote, he openly declared, so they can win elections.

And some Republican state legislators have fallen back on the ugly, destructive lie that the 2020 election was somehow stolen from Donald Trump to justify newly-proposed measures scaling back access to voting.  Even Justice Thomas gave a nod to this wacko theory, writing in a recent dissent that “an election free from strong evidence of systemic fraud is not alone sufficient for election confidence.”  This is the stuff conspiracy theories are made of: There’s no proof of this thing being real, where there ordinarily would be evidence if it was real, but it still could be real anyway.

This will be a defining moment for the new Democratic majorities in both the House and Senate. If they can’t get HR-1 passed, Republican-led states will eagerly fill the void. The question is whether Democrats will have the skill and the backbone to leverage their current, and perhaps fleeting, political power — or whether, as often happens, Democrats will play nice while Republicans play for keeps. 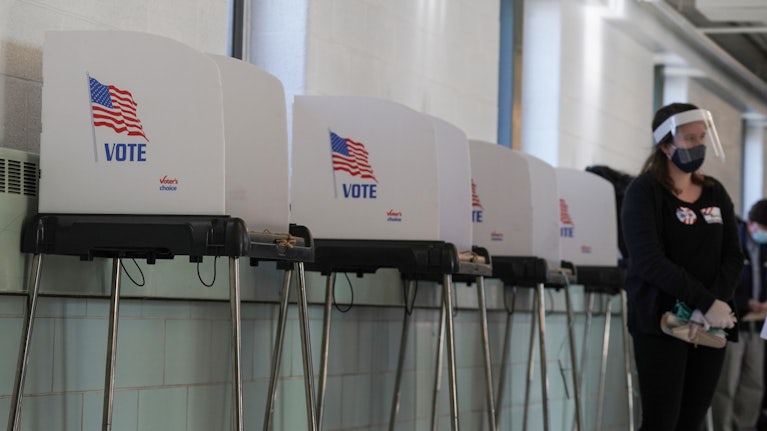 Note From Elie: Voting Rights at a Crossroads