Like so many other things on our normal calendars, the Jewish high holidays feel different this year.

For the first time in my 45 years, my immediate family wasn’t all together, physically.  We patched something together, between FaceTime calls and smaller backyard gatherings, and we’ll be fine; the loss here is trivial, a miniscule fraction of what many others have endured.  (And I still got to have my mother’s legendary matzo ball soup; she dropped off two frozen-solid bricks last weekend, one of the broth and the other of the matzo balls.  I managed to defrost and re-heat, and it came out as good as ever).

Despite the logistical adjustments to the festive meal, the core concepts behind the high holidays remain the same: self-reflection, atonement, gratitude.  For those who don’t celebrate, the Jewish high holidays are mostly about stopping and taking stock  What have I done wrong this past year?  Who have I hurt?  How can I do better?

There’s one particular meditation that captures this best, in my mind.  Essentially, the reader ticks off a long string of personal failures.  Some are inarguable sins (I have stolen; I have taken bribes).  Others cover how we relate to our family, friends, and others (I have disrespected parents or teachers; I have gossiped).  Still others are more technical violations of religious protocol (I have failed to keep kosher; I have used the lord’s name in vain).  The tradition is that, as each item is read aloud, you hit yourself — symbolically, more of a tap to the chest — to signal “Yeah, I did that one, and I need to do better next year.”

A strange new transgression suddenly appeared in a modern prayer book that my synagogue started using a few years ago:  “I have eaten meals while in my car.”  At first I did a double-take and thought, well then, I’m in big trouble.  (At the time, I was working for the New Jersey Attorney General, driving all over the state, inhaling Wawa hoagies).  But when I thought about it for a bit, I understood what it meant: I’ve spent too much time thoughtlessly going about my business, without pausing even for a minute to appreciate, to enjoy the basics.  Even a turkey and provolone six-incher.

One of the best things about being a prosecutor is that it’s the rare job that — like the high holidays — involves and even requires occasional self-reflection.  The job actually changes you, as a person.  Everybody comes out of it differently but I think, in the best case scenario, you emerge more self-aware, more empathetic, more modest.  It takes time.  Candidly, you won’t find many first- or second-year prosecutors who have learned and internalized those concepts; I sure hadn’t, at that point.

But I do remember a particular moment towards the end of my time with the SDNY.  I had just lost a big mob trial, against a Boss (the jury hung — meaning it could not come to a unanimous verdict either way — which is, as a practical matter, a loss for the prosecution).  And this came right on the heels of a hot streak, where I reeled off three major trial wins in the preceding year.  After the case ended, I went to talk to the judge, keeping with SDNY tradition.  On the bench, the judge was out of central casting: tough, demanding, red-faced, hot-tempered.  But in chambers, he was kind and reflective.  And he said to me, in essence: I know this one stings.  But this is our system, and you can’t always control what a jury does.  Let it be a lesson.  A little humility can be a good thing.

Indeed, somehow, with the nearly unimaginable power that prosecutors hold, the job can still teach you to be humble — to understand your role in our system of criminal justice and, more broadly, in democratic government.

We all learn from our own experiences, and mine pale in comparison to the late Justice Ruth Bader Ginsburg.  But her words speak to me and countless others.  When asked about the vast power invested in her as a Supreme Court justice, Gisburg responded:  “One could become arrogant or imperial. But Supreme Court justices know that the Constitution places great trust in the Court’s hands, and fidelity to that trust makes us approach our work with due humility.”

Right now, our Justice Department should heed Ginsburg’s words and take a dose of humility.  Not the dedicated career prosecutors, law enforcement agents, paralegals, and other staff who form the Department’s backbone, and guts, and heart.  But the leadership — specifically, the Attorney General.

William Barr has been on an absolute bender lately.  He has unabashedly injected partisan politics into Justice Department prosecutions; he has eagerly parroted President Donald Trump’s campaign talking points; he has made comments that range from the silly (suggesting protesters be charged for sedition) to the reprehensible (comparing Coronavirus restrictions to slavery).

Underlying it all is an abiding sense of entitlement, of unrestrained arrogance.  Barr’s fundamental approach to the job throughout his tenure has been: I’m the attorney general, I do what I want, and nobody can stop me.  He has lied to the public about everything from the Mueller report to mail-in ballot fraud.  He has casually defied Congressional subpoenas for his testimony.  He has smugly declared that “History is written by the winners.”

Barr’s arrogance reached new heights (or lows?) when he declared that he holds absolute power and that “[l]etting the most junior members set the agenda might be a good philosophy for a Montessori preschool, but it is no way to run a federal agency.”  It is difficult to think of any more arrogant thing that any leader, in any field, could say.  Keep in mind: here you have Barr, who has never tried a case in his life, demeaning, belittling, even infantilizing the men and women who fight for justice (and, Justice) in the trenches every day across this country.

Making matters worse, Barr went completely off the rails when he declared imperially, “[A]ll prosecutorial power is vested in the attorney general. And these people are agents of the attorney general. As I say to FBI agents, ‘Whose agent do you think you are?’ Now, I don’t say this in a pompous way, but that is the chain of authority and legitimacy in the Department of Justice.”  All due respect, Mr. Attorney General: you actually do say that in a pompous way, despite your protestations.  And, for the record, when FBI agents and federal prosecutors alike take the oath of office, they do not swear allegiance to the attorney general, or to William Barr, but to the Constitution.  Nor do they serve the attorney general; they serve the American people.  This is basic stuff.

I’m not optimistic that Barr will suddenly change.  He has shown us what he is.  But this is a season of forgiveness, and of rebirth.  So I’ll hold out hope that, at a minimum, perhaps Barr will engage in just a moment of self-reflection and perhaps discover some bit of humility.

Whatever Barr does, he won’t be in charge forever, or possibly for much longer.  Whoever leads the Justice Department next — Republican or Democrat — will face an imposing rehabilitative challenge.  And while that next attorney general will have an enormous amount of cleanup to do, I hope that person starts by accepting the job with a proper respect for the Justice Department and for the dizzying power he or she will hold.  As I learned from my own work as a prosecutor and as Justice Ginsburg reminded us: we can all use a bit of humility. 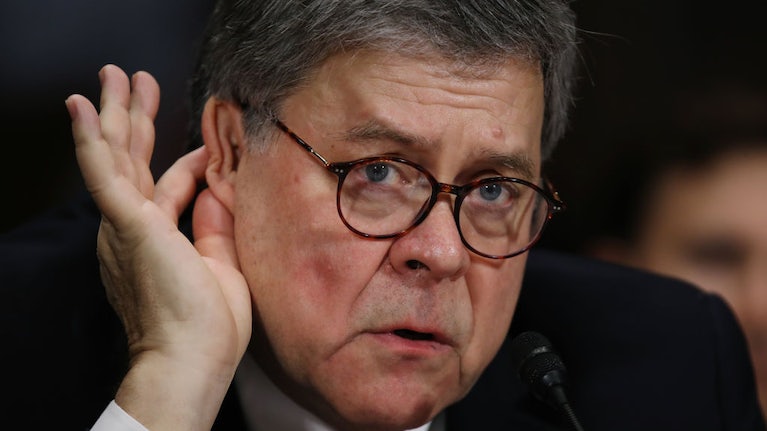 Note From Elie: We Can All Use a Bit of Humility, Especially AG Barr