Our dear Constitution, you are a wondrous, brilliant document. We want to say that right up front. We truly admire you. You’ve stood up over the centuries, you have guided us, and you hold us together. Now, you’re not perfect, but you’re willing to amend your ways, from time to time. You are a living, evolving document (even though you haven’t made any changes since 1992, but this is a judgment-free zone). Know this: you are appreciated.

But we asked you to come here today because you do have one little habit that we need to discuss. Please, take this in the loving spirit in which it’s intended. You see, every once in a while, you give us some important command – but then you tell us absolutely nothing about how it’s supposed to work. And, sometimes, your habit can make us feel a bit adrift.

Take, for example, the Fourteenth Amendment. Not the big-ticket headliners in section one, due process and equal protection. Those are fine – great, even. We’ve been working with those clauses ever since the ratification of the Fourteenth back in 1868. We haven’t gotten them entirely figured out, and maybe we never will, but we’ve got plenty of precedent in place and a solid idea of the general contours.

But if you scroll down to section three of the Fourteenth Amendment, you’ll see a provision that no official who has “engaged in insurrection or rebellion against the [country], or given aid or comfort to the enemies thereof” can hold public office again in the future. The intent was primarily to prevent former Confederates from infiltrating the government of the newly-reunified country. Ok, sound concept there. Nobody can reasonably disagree with its wisdom and necessity. But here’s the problem: the Constitution gives us nothing whatsoever about how this “insurrection or rebellion” thing is supposed to work.

I know, I know: the Constitution was never intended to be a hands-on, how-to manual. But at least give us something to work with. Even on impeachment, with all its holes and ambiguities, the Constitution at least specifies “high crimes and misdemeanors,” majority vote of the House to impeach, two-thirds of the Senate to convict, removal from office and potential disqualification as penalties. There’s plenty of interstitial space, but at least we have the scaffolding.

But when it comes to “insurrection or rebellion,” nothing – or, nearly nothing. Oddly, the Fourteenth Amendment does specify that an official who has been barred from holding office under the provision can be reinstated by two-thirds votes of both the House and Senate. So we don’t know how to kick somebody out, but we do know how to let him back in.

The first unanswered question about the “insurrection or rebellion” clause is simply this: Who decides? Does Congress itself determine whether a person has violated the Fourteenth Amendment? If so, would such a finding require votes of both House and Senate, or just one? What vote is required – majority, two-thirds, or something else? Does the accused have some ability to defend himself? Do courts have any say? Do we need a finding from a judge, or a jury? If so, by what standard of proof?

The closest thing we have to precedent isn’t particularly helpful. In 1918, Congress used the Fourteenth Amendment to refuse to seat Representative Victor Berger, who had been convicted in a criminal court for espionage. (I wonder if Berger might have argued that, while he was convicted for espionage, that wasn’t quite the “insurrection or rebellion” required by the Fourteenth Amendment; it would’ve taken some chutzpah, but it just might have worked.) But in 1921, the Supreme Court threw out Berger’s conviction and, the next year, he ran successfully for re-election to the House.

In my view, Congress as a necessary first step must pass a law specifying how the disqualification process works. Congress might reserve the right to make a finding of “insurrection or rebellion” to itself, or it might offload those proceedings to the courts. Legislation also should address the nuances: what portion of a vote is required, what burden of proof, how proceedings would be structured. Such legislation itself almost certainly would be challenged in the courts, but if it held up, then we’d finally have some enforceable system in place.

This is why the lawsuit that seeks to bar Representative Madison Cawthorn from future public office is doomed to fail. Put aside for a moment whether Cawthorn actually engaged in “insurrection or rebellion,” or gave aid and comfort to others. The problem is that we have no established procedure by which to make that determination. You can’t make something up on the fly, or apply a new set of rules retroactively. (See “Due Process,” earlier in the Fourteenth Amendment.)

Of course, the real focus here, spoken or not, is Donald Trump. The Cawthorn lawsuit no doubt is intended as a trailblazer, a doomed scouting mission that could at least shed some light on how the process might work. Some have suggested that Trump could be disqualified under the Fourteenth Amendment because, in his second impeachment, the Article of Impeachment was specifically entitled “Incitement of Insurrection,” complete with a cite to the Fourteenth Amendment. Even though Trump was not convicted in the Senate impeachment trial, the argument goes, over half the Senate did vote to remove him (in favor of the Article of Impeachment, that is).

This argument, while clever, has three major flaws. First, who says it’s up to Congress to decide whether a person has engaged in “insurrection or rebellion”? Maybe that’s a decision for the courts, or a jury. We don’t know, without some legislation assigning the task to one body or another. Second, even if it is up to Congress, how do we know that a majority vote in the Senate is sufficient? Maybe it requires two-thirds, like removal upon impeachment. Again, without a statute tested in the courts, we just don’t know. Third, Trump was given no notice that the impeachment vote would also be held against him under the Fourteenth Amendment. I know, the Article did say “insurrection” but it was not styled procedurally as a disqualification under the Fourteenth. If he had had such notice, he might have defended himself differently, and members of Congress might have voted differently. (Again, if you’re not inclined to offer Trump or anyone else even a modicum of process, I’d refer you to the opening section of the Fourteenth Amendment.)

In fairness, our dear Constitution, it’s getting a bit late to blame you anymore. Yes, you flubbed it back in 1868 when you gave us the “insurrection or rebellion” clause, without the instruction manual. But we’ve had a century and a half since then, and we haven’t done a thing to figure it out for ourselves.

So, for now, we remain in the desert. The Fourteenth Amendment sits out there on the horizon, a promising oasis of accountability. But without at least some meaningful guidance from Congress and the courts, it’s just a mirage. 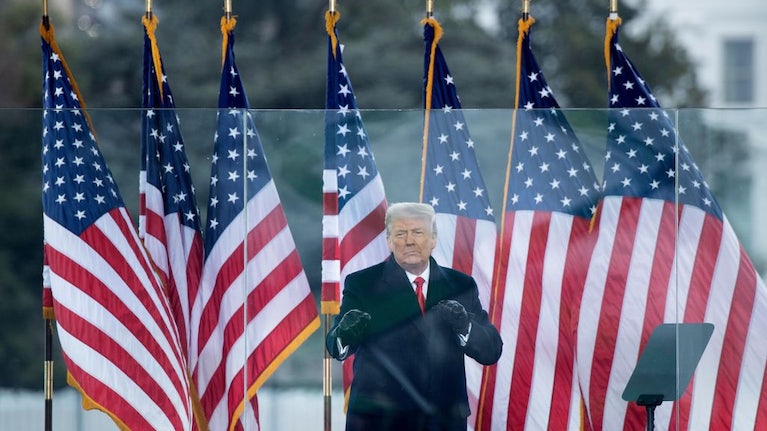 Note From Elie: Where the Constitution is Silent