I’m a bit at a loss for words this week. With a sorry response to a spreading virus sinking markets and scaring citizens, it’s hard to be optimistic. It’s easier to be confused and angry and uncertain. As a trained lawyer and former prosecutor, I felt that I had expertise during the Mueller probe and impeachment. I felt that I could assess events, even as I worried that there was a criminal in the White House and the rule of law was under attack. I had a foothold, something to grab onto. When events unfolded – like the firing of the FBI director, the arrest of the President’s personal lawyer, the disclosure of the Ukraine phone call, and so on – I could put each in perspective and stop from underreacting or overreacting. Even as we seemed to be going off the rails, I understood where the rails were, what they were made of, and how far we were deviating.

This is different, and like most of you, my own understanding of COVID-19 is at the mercy of epidemiologists and infectious disease experts inside and outside of government. My understanding of the efficacy of the government’s response is guided by my own common sense, along with what I hear politicians and policy experts saying publicly. None of my understanding is informed by a single word uttered by the President of the United States. In his stark Oval Office address yesterday, Trump botched at least three of his own main policy proposals and they had to be corrected (whether goods were banned from Europe; whether U.S. citizens could return from Europe; and whether insurance companies would waive co-payments for treatment).

I have been talking with lots of people every day about the virus and our response, including medical professionals and policy experts, and so I have formed some views on various aspects of the crisis. But for now, there are much better people to convey that kind of information.

What has struck me this past week is that one’s degree of worry and alarm is very much affected not necessarily by medical pronouncements, but by proximity to the outbreak, by personal disruptions, and by jarring changes to regular life. Many of you may recognize the feeling, of being jolted in your own home, again and again.

I’ll share some of the ways I’ve been jolted. Feel free to share back some of your own.

On Sunday night, our boys’ high school suddenly shut down.

On Tuesday, our daughter’s college announced it was closing, not temporarily but permanently for the rest of the academic year. Though there will be remote learning, every single student has to clear out for good this weekend. That’s quite a jolt to a college freshman.

Also on Tuesday, NYU Law School, where I teach, announced there would be no more in-person teaching for the time being. By today, hundreds of other universities have done the same. Now I have to figure out how to use Zoom to instruct my students going forward.

My family lives a stone’s throw from New Rochelle, now famously associated with coronavirus. Yesterday the national guard was ordered to the area to assist with containment. Jolt.

This week the company that puts out our podcast and this newsletter and all CAFE content instructed all employees to work from home. Anne and I have obtained microphones and are developing a method to efficiently produce the Insider podcast remotely.

Every speech and event for which I was scheduled between now and mid-May has been canceled.

People who are typically measured have been messaging me with increasing alarm.

I haven’t engaged in a handshake with anyone in over a week. At first that was quite awkward; now it’s mundane.

My hands have never been more washed, and they have never felt more unclean.

My father-in-law turns 91 today. He is temporarily in a rehabilitation facility. He comes home Saturday, but no one can visit him on his birthday today because of concerns about introducing contagion.

Some of the jolts are shared widely.

For some time, no one I know has been able to find hand sanitizer, even on the Internet. Every cough on a train draws alarm. There are oddly empty shelves in grocery stores and drug stores. On Monday and again this morning, trading halted because the S&P had fallen too far, too fast. Last night the NBA canceled its season. Tom Hanks and his wife have the virus. That is jarring for reasons that I can’t fully explain. Governors are beginning to prohibit all large gatherings of people. Italy has locked down all of its 60 million people. Each of these things was a jolt.

These disruptions, small and large, to our regular patterns of relating to each other do a lot to feed our unease and can slide us into panic. We rely on things like abundant supplies, friendly greetings, the constancy of work and school and entertainment.

I know there are some people who are not taking this crisis seriously, who think it’s overblown. For too long the President was of that view. That attitude is a mistake. Do what you can to disabuse people of that view if you know them. Life has changed and it’s not going back to normal anytime in the near future. The hope is that those jarring changes are what get us back to normal sooner rather than later.

How has the outbreak impacted your daily life? Let us know your thoughts by writing to us at [email protected], or reply to this email 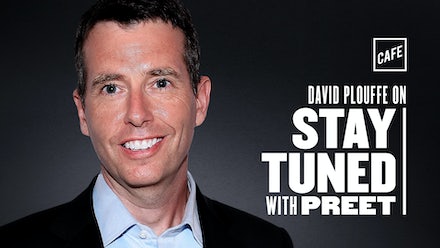 This week’s guest on Stay Tuned is David Plouffe. A veteran campaign manager and political consultant, Plouffe oversaw Barack Obama’s iconic 2008 presidential run. Plouffe later served as Senior Advisor to President Obama during the tense 2011 government shutdown and his 2012 reelection race against Mitt Romney. Last week, Plouffe published A Citizen’s Guide to Beating Donald Trump, a book of pragmatic advice for Democratic voters to maximize their impact in the upcoming 2020 election. Since September 2019, Plouffe has hosted the Campaign HQ podcast, where he breaks down the latest developments in the 2020 race with campaign insiders and political veterans like Hillary Clinton and John Kerry.

In this excerpt from his conversation with Preet, Plouffe explains why the coronavirus presents a new kind of problem for President Trump:

This is the first time Trump cannot really spin his own alternative facts and version of events. We’re pretty soon, unfortunately, going to know people who’ve lost jobs, who’ve been affected economically, who’ve gotten the virus. And that’s going to fly in the face of him saying, ‘Everything’s fine! Don’t look over here. We’ve got it all under control!’…We saw this with Katrina and President Bush; that’s really when the public lost faith and confidence in him.”

Listen to today’s episode, the bonus, and share your thoughts by writing a review or emailing us at [email protected]

Dr. Robert Redfield is a virologist serving as the Director of the CDC. His account provides up-to-date information on all things coronavirus, including helpful everyday measures we can all take to mitigate risk. Follow him @CDCDirector.

The account run by the agency itself, @CDCgov, is hosting a Q & A with coronavirus questions on Friday, March 13th. And, the official account of The National Institute of Health, @NIH, is also posting and re-tweeting the most critical and up-to-date information about the virus.

If you haven’t already, listen to the latest episode of the CAFE Insider podcast: “Virus Lockdown & SCOTUS Showdown” and follow along with this transcript.