I’m taking a short break from writing and talking about the election, but I remain positive Trump cannot steal the election from Joe Biden, try as he might. I leave you this quick word of reassurance:

There’s no cause to dread Trump escaping

An electoral hole that is gaping

We’ve nothing to fear? 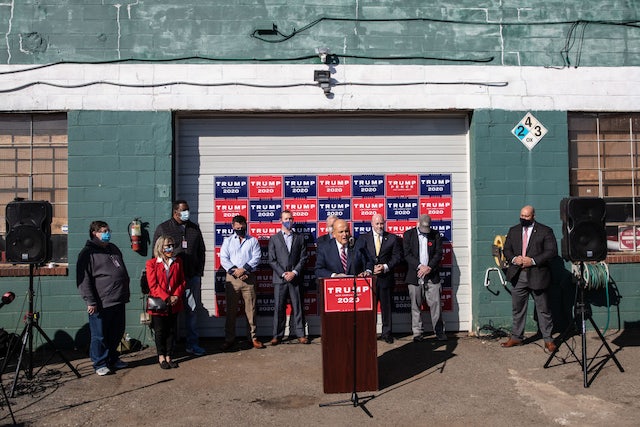 The Supreme Court heard oral arguments on Tuesday in a blockbuster case that will decide the fate of the Affordable Care Act, Barack Obama’s signature legislative achievement and a hotly-debated campaign issue leading up to Joe Biden’s election victory last week.

Following Justice Ruth Bader Ginsburg’s death and the confirmation of Justice Amy Coney Barrett, many national Democrats and legal observers painted a dismal picture: this new Court would mean the end of the ACA, and millions of Americans with pre-existing conditions would lose their healthcare.

But after two hours of oral arguments, the most conservative Supreme Court in generations looked poised to uphold the bulk of the landmark healthcare law.

That’s because Chief Justice John Roberts and Associate Justice Brett Kavanaugh, two members of the Court’s conservative bloc, said that striking down the law’s so-called individual mandate did not require the rest of the law to be struck down as well.

The individual mandate — the provision in the ACA that initially required most Americans to buy health insurance, or pay a penalty — was effectively eliminated in 2017 when congressional Republicans zeroed out the penalty as part of their sweeping tax reform bill.

The ACA has withstood two earlier Supreme Court challenges, in 2012 and 2015. In 2012, a divided Court upheld the individual mandate in National Federation of Independent Business v. Sebelius, with Chief Justice John Roberts joining the four liberal justices in ruling that it was a constitutional tax imposed on individuals who do not obtain health insurance. And in 2015, a six-justice majority ruled in King v. Burwell that the law allows the federal government to provide nationwide tax subsidies.

The law made its way back to the Supreme Court after a host of Republican governors and attorneys general filed a lawsuit arguing that the removal of the penalty in 2017 rendered the individual mandate unconstitutional. Without the penalty, they argued, the mandate is simply a command to buy health insurance.

A federal judge in Texas agreed with the challengers, ruling that the individual mandate was unconstitutional and that the rest of the law could not stand without it. That prompted the attorneys general of California and other Democrat-led states to appeal to the Supreme Court, which agreed to hear the case.

Multiple justices, especially newly-seated Justice Amy Coney Barrett, focused their questioning on the issue of standing. In order to have standing to bring a lawsuit: 1) a plaintiff must personally have suffered some actual or threatened injury; 2) that injury can fairly be traced to the challenged action of the defendant; and 3) that the injury is likely to be redressed by a favorable decision.

According to the SCOTUSblog co-founder Amy Howe, one of the nation’s most respected court watchers, the case could very well be decided on the issue of standing alone. “[Standing] is a threshold question in the case: If the court ultimately determines that no challenger has standing, it could throw the case out without ruling on substantive constitutional questions,” Howe wrote. “Although the question of standing can sometimes be a formality, it was front and center for much of Tuesday’s argument, and the justices appeared divided.”

But even if the justices rule that the plaintiffs have standing and the individual mandate is unconstitutional, Justices Roberts and Kavanaugh were fairly explicit on how they might rule on the issue of severability.

“It’s hard for you to argue that Congress intended the entire act to fall if the mandate were struck down,” Chief Justice Roberts told Kyle Hawkins, Texas’s Solicitor General, “when the same Congress that lowered the penalty to zero did not even try to repeal the rest of the act.”

Similarly, Justice Kavanaugh said: “It does seem fairly clear that the proper remedy would be to sever the mandate provision and leave the rest of the act in place — the provisions regarding pre-existing conditions and the rest.”

Assuming the ACA survives this latest challenge, were the fears of its demise overblown? Are you surprised that the coalition that looks poised to uphold the law includes Chief Justice Roberts and Trump-appointed Justice Kavanaugh?

Steve Kornacki is a national political correspondent for NBC News and MSNBC. As the world waited for the results of the presidential election last week, Kornacki monitored MSNBC’s digital electoral “big board” map. And he went viral for his energy and intensity overcoming sleep deprivation. Follow him: @SteveKornacki

— Listen to this week’s episode of Stay Tuned, “Risks Realized,” where Preet is joined by Ian Bremmer, the founder and CEO of Eurasia Group, a leading global political risk and research firm. And, don’t miss the bonus, where Bremmer discusses the possibility of Trump running again in 2024, and explains his fascination with puppets.

— Look out for tomorrow’s special episode of United Security, where Ken Wainstein is joined by former CIA Director John Brennan.