Serving in public office should not mean risking your life. But physical harm has become a very real threat to leaders at all levels of government in the United States. If we want to attract good people to public service, we need to tone down the violent rhetoric and respect the privacy of public officials by making their homes off-limits for protests. I’ll state what a public official might be reluctant to say — get off my lawn.

Last week brought news in my home state of Michigan of threats against three elected officials. According to the charges, U.S. Senator Debbie Stabenow received threats from a Michigan man who claimed fraud in the 2020 election. The same man, who said he was part of a militia group, is also charged with threatening violence against U.S. Rep. Elissa Slotkin of Michigan. In addition, a Georgia man was charged with threatening a Michigan judge over her decision last fall regarding absentee ballots. Rep. Slotkin said that elected officials, “particularly women, are unfortunately no strangers to violent, threatening calls and comments, and it has got to stop.”

Threats are properly treated as crimes because they create harm simply by being communicated. When I served as a federal prosecutor, we charged threat cases not only to protect public safety, but also to deter others from engaging in similar conduct. Threats are designed to create fear. For that reason, threats are particularly egregious when communicated against public officials because they are intended to intimidate them in their official duties. Threats are antithetical to our democratic form of government, where decisions should be based on popular vote, sound public policy and constitutional protections, and not coercion.

Another reason that prosecutors take threats seriously is that sometimes people move beyond words. Last summer, we saw a fatal attack on a judge’s family in New Jersey. A lawyer, who had described himself as anti-feminist, appeared at the home of U.S. District Judge Esther Salas, disguised as a FedEx driver. Tragically, when the judge’s 20-year-old son opened the door, he was shot and killed. The judge’s husband was wounded. That deadly encounter brought to mind another attack against U.S. District Judge Joan Lefkow in Chicago in 2010. Her husband and mother were killed by a disgruntled litigant inside the judge’s home while she was away.

Those reminders of the danger of public service also make it very intimidating when protesters appear outside an official’s home, a disturbing trend. Members of both political parties have endured this kind of harassment. In June, a Seattle City Council member brought protesters to the home of Mayor Jenny Durkan to demonstrate against police violence. Mayor Durkan previously served as the U.S. Attorney in Seattle, an office that in 2001 experienced the still-unsolved murder of one of its prosecutors. Michigan Secretary of State Jocelyn Benson, who supervised the November election, faced armed protesters at her home in December while she was inside with her young son. Protesters recently gathered outside the home of Sen. Ted Cruz to protest his trip to Cancun during a massive power outage in Texas.

Of course, we all have the right to protest peacefully, but when protests occur at a public official’s home, they convey implicit threats of violence and intimidation. Strong-arming leaders is not the way a democracy works. Demonstrations at other locations, such as public buildings or landmarks, are just as likely to receive public attention to get a message across. Targeting a home brings a menace rather than the expression of ideas.

This threat of harm comes at a cost. Across the country, public health officials facing anger over masking and closure orders have resigned amid armed protesters at their homes, death threats on social media and public disclosure of personal information, such as their home addresses and names of loved ones. Threats are also likely to discourage talented candidates from seeking public office in the first place. People with other career options will be reluctant to put themselves or their families in harm’s way.

Of course, our history has seen violence against public officials since the days of Abraham Lincoln, but the threat seems to be growing, and is often aimed at women. The COVID-19 pandemic certainly contributes to this trend. With 500,000 people dead, schools closed and businesses shuttered, some people look for scapegoats. And social media allows us to vent our anger behind an anonymous platform. Both of these factors feed the increasing volume of threats.

One other driver of our threat culture, though, is one over which we can exercise influence — the words we tolerate from public figures. Former President Donald Trump and other powerful people use their platforms to exploit divisions and humiliate opponents. President Trump has famously used campaign rallies and Twitter to bully his rivals. Former presidential adviser Steve Bannon has spoken publicly about putting the heads of Dr. Anthony Fauci and FBI Director Christopher Wray “on a pike” as a warning to others against disloyalty to Trump. The late Rush Limbaugh made a career out of belittling others. These public figures have found fame, profit and political fortune by fomenting rage against their targets. And by dehumanizing people, they grant license for others to show similar disdain.

At its most extreme, listeners prone to violence will take the rhetoric as a call to action. In fact, some defendants charged in the Jan. 6 attack at the Capitol have said they were acting on orders from the president. In 2019, a Florida man was convicted of sending pipe bombs to people he considered Trump’s rivals, including politicians and members of the media, whom Trump has dubbed “the enemy of the people.” In a prelude to the Capitol attack, armed protesters demonstrated against Michigan Governor Gretchen Whitmer’s stay-at-home orders at the state Capitol in April. Protesters brought a sign reading,“Tyrants get the rope,” and an unclothed female doll with a noose around its neck. President Trump responded by tweeting “LIBERATE MICHIGAN.” He had previously disparaged Whitmer in tweets as “the woman in Michigan,” who was “way in over her head” and “doesn’t have a clue,” even nicknaming her “Half-Whitmer.” In October, 13 men were charged with plotting to kidnap Gov. Whitmer over her lockdown orders. While there has been no direct evidence linking the alleged plot with President Trump’s statements, his reckless use of loaded words has certainly contributed to the rage some people have directed at Whitmer.

Debasing language that was once shunned as unprofessional is now seen by some as refreshing and honest. But this language is not only ugly, it is also harmful. While our First Amendment protects our legal right to free speech, we need our leaders to take moral responsibility for the consequences of their words.

And as voters and audiences, we have the power to hold them accountable. We can shape the behavior of public figures by supporting those whose language respects the dignity of others and by rejecting those who appeal to our worst instincts. Let’s reward ideas, not insults. We don’t need to tolerate those who are themselves intolerant.

Public service has always required thick skin and a willingness to endure criticism, but it should not require the risk of death. If we want to attract the best and brightest to public service, we need to stop the behavior that leads to violence. So if you want to get the attention of a public official, by all means, share your ideas. But stay off their lawn. 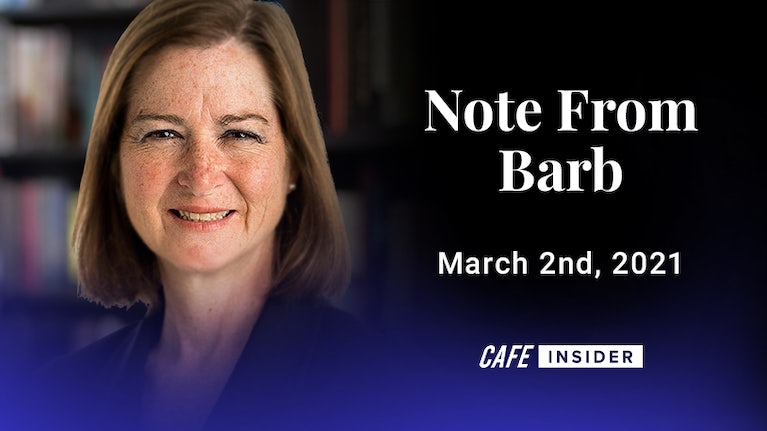 Note From Barb: Get Off My Lawn