Wednesday’s failed coup looks even more frightening in the rearview mirror. Watching it in progress was bad enough. Our democracy was so fragile that for a moment it hung on a series of slender threads—a lone Capitol Police officer who diverted the mob’s attention, steering it away from the still full Senate chamber for long enough for the doors to be locked; members of the House evacuated after the gallery door was broken.

In October, Trump said he would accept the results of the election…if he won. He wasn’t kidding.

His goal last Wednesday was nothing less than preventing the peaceful transfer of power to a duly elected president. He wasn’t shy about it. The week before Christmas, he tweeted: “Big protest in D.C. on January 6th…Be there, will be wild!” He exhorted that crowd at his rally Wednesday morning to “fight harder” and used his son, Don Jr., to aim them at the Capitol with the warning to legislators who weren’t backing Trump’s lies, “We’re coming for you.”

The question was always, how far Trump would go—perhaps that’s the defining question of his entire presidency. The answer has usually been, too far. Senator Ben Sasse, a Nebraska Republican, told reporters Trump was “delighted” when he learned the mob was breaking into the Capitol building. The president was confused that no one else was as thrilled as he was. By the time Trump was forced to the teleprompter to concede, it’s not hard to imagine he was pressured by advisors who feared he, and perhaps they, might find themselves the subjects of criminal investigation if Trump didn’t take steps to quell the insurrection. Even then, he still called the rioters “very special people,” a dull echo of Charlottesville, when white supremacists and Nazi protestors were “very fine.”

As a nation, we’ve been, collectively, too quick to excuse and forgive Trump’s failings. Despite the evidence of our eyes and ears last week, pro-Trump supporters have already launched a counter-narrative, saying Wednesday’s events were the work of Antifa. Incredibly, there are people in our country, too many people, who are willing to listen and who continue to fall for the lies. It’s not just people in Trump’s base who seem willing to ignore the attack on the Capitol. Already, there are voices suggesting we should heed the demands of Republicans like Ted Cruz and Lindsey Graham, who supported Trump’s lies about the election and now insist on healing and unity instead of accountability. Americans who want to push the unpleasantness aside so they can get on with their comfortable lives are missing the fact that the fox is still proudly strutting around in the hen house.

New York’s beloved former Senator, Daniel Patrick Moynihan, famously said, “Everyone is entitled to their own opinions, but they are not entitled to their own facts.” Trump’s biggest crime may ultimately be killing off the truth. Its death is largely responsible for where we find ourselves, at the end of a presidency that started with lies about the size of one inauguration and now ends with lies about who should be sworn in at the next one.

Getting to the truth has always been one of the most important purposes of our criminal justice system. Through investigation and prosecution we find out what happened in serious and important matters and hold people accountable. Perhaps that’s what motivated Trump to attack law enforcement in the first place. Truth was never going to be his friend, so he tried to pervert the criminal justice system, seeking its conversion into a political tool he could use to help his friends and harm his enemies. In Trump’s America, no man was above Trump. The rule of law didn’t matter.

But now, in the closing days of the Trump administration, there’s a chance to get this right. We are living through an unprecedented attack on our government, an attack from inside the house. Unlike 9/11, unlike other criminal acts committed by terrorists foreign and domestic, we’ve heard nothing official on what happened from the Justice Department. The rule for law enforcement after an incident like this is to be first and be accurate—give people the information they need to stay safe, to understand any ongoing risk, and to have confidence that law enforcement is working to get to the truth. Briefings happen following far less significant incidents than an attack on the Capitol by white supremacist terrorists. So, where are the round-the-clock briefings the American people should be getting? Chris Wray is still the Director of the FBI. He could begin the job of telling the truth to the American people, even while investigation is ongoing.

One thing we can be more confident of is that Joe Biden’s Justice Department will get this right. Both the Attorney General nominee, Judge Merrick Garland, and the Deputy Attorney General nominee, Lisa Monaco, worked on the prosecution of the Oklahoma City bombing. Both understand the threat posed by domestic terrorism and have demonstrated records of commitment to uncovering the truth and doing the right thing. Their challenge will be restoring the credibility Trump has stripped away from law enforcement so they can share what they learn with the country.

Part of the challenge they face, in uncovering the truth, will be doing a better job of assessing the threat the country faces from domestic terrorist groups. Some parts of law enforcement overlooked the threat posed by groups like the Proud Boys and their supporters. The fact that they, and the relatively ordinary people among them — police officers, doctors, ex-military members, office workers — were predominantly white, that they didn’t match the stereotypes of what a terrorist looks like, appears to have made it all too easy to ignore the serious threat they posed. It’s time for us to evolve beyond a law enforcement culture that has interfered with treating white hate groups as the terrorists and criminals that they are.

Former California Governor Arnold Schwarzenegger compared the mob at the Capitol to Nazi Brownshirts and invoked the Kristallnacht pogrom against Jews. Comparisons of Trump to fascist leaders have been commonplace since he came to office, but out of a sense of misplaced decency and decorum when it comes to a sitting president, they’ve been rejected all too often. Yet the videos from the Capitol show American flags being used to beat police officers as protestors break into the Capitol, show Black police officers being subjected to humiliating abuse by the mob because of the color of their skin, show people overrunning the Capitol and searching for the Speaker of the House and the Vice President with zip ties in hand. This is not an America any of us want to live in. It’s time to face the hard truths whose avoidance permitted Trump to survive for too long. It’s premature to talk about healing and unity, although I believe we can ultimately get there. The only path forward now is through truth and accountability. 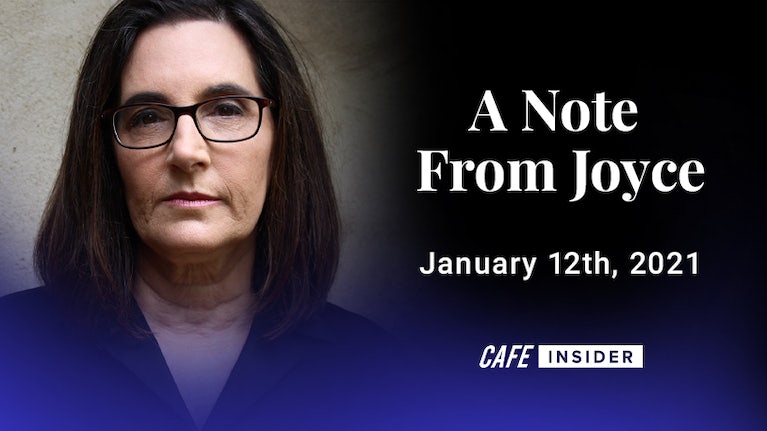 Note From Joyce: The Cost of the Steal