Several late-stage polls and much punditry last week predicted a Republican victory in the midterms. On Tuesday evening, however, Democrats remained competitive in a number of races, seriously contesting the Senate and the House. On this week’s episode of Now & Then, “Power, Polling, & Public Opinion,” Heather Cox Richardson and Joanne Freeman discussed the fallibility of polling in American history, from Madison and Hamilton’s scattershot attempts to ascertain public opinion via spy-allies to the failure of more scientific polling during the 1948 presidential election. A Senate-level polling reckoning came in the 1982 race between incumbent Connecticut Republican Senator Lowell Weicker and his Democratic challenger Toby Moffett, which revealed the political and scientific fallibility of measuring public opinion.

By 1982, Lowell Weicker was the most liberal Republican in the Senate. The wealthy grandson of a Squibb drug empire co-founder, Weicker was elected in 1970 and became the first GOP Senator to call for Nixon’s impeachment. Weicker was pro-choice. He voted for race-integration busing legislation. He opposed restoring prayer in public schools. And throughout the late 1970s and early 1980s, he regularly led filibusters against the conservatives in his own party to protect these positions.

Where Weicker was a Nixon and Reagan detractor, his chief Democratic rival for the 1982 Connecticut Senate race, Representative Toby Moffett, was a straight-up foe of the GOP. As a 25-year-old in 1970, Moffett had briefly headed up the short-lived Office of Students and Youth at what became the Department of Education, only to resign in disgust after Nixon referred to student protestors as “bums” in the immediate response to the Kent State shooting. “There is nothing President Nixon can do to win the confidence of students,” Moffett said during the press conference announcing his resignation. After a stint as director of the Connecticut Citizen Action Group, a Ralph Nader-affiliated environmental organization, Moffett reached the House in 1974, where he remained a progressive voice on environmental and social issues.

Weicker and Moffett faced off for the Senate amid a worsening recession and a deepening discomfort with supply-side economics. Weicker’s slogan, “Nobody’s Man But Yours,” showcased his intentional distancing from his own party.

Moffett, meanwhile, doubled down on his 1970s outsider status, but picked up a coterie of powerful Connecticut-based media personalities in the process. At one November 1981 Moffett fundraiser at Georgetown’s Prospect House, the candidate was flanked by actor Paul Newman, playwright Arthur Miller, novelist William Styron, and director Mike Nichols.

In January 1982, Weicker’s anti-Reagan posture spurred the sudden entrance into the Senate contest of insurance executive Prescott Bush, Jr., then-Vice President George H.W. Bush’s brother. Bush highlighted his support for Reagan’s policies and quickly gained supporters among GOP state figures who were wary of Weicker’s liberal tendencies. Detractors, however, feared that the conservative Bush would have no chance in the state – which had far more registered Democrats than Republicans – in a head-to-head against Moffett.

Bush hurt his own cause with a number of gaffes in the early goings. At a March 1982 fundraiser in tony Greenwich, in reference to undocumented immigrants, Bush made an offensive joke, saying, “I’m sure there are people in Greenwich who are glad they’re here, because they wouldn’t have someone to help in the house without them.”

Bush weathered the bad press from the Greenwich comment, but eventually bowed out on July 28th, citing desires for party unity and fears of an uphill fundraising battle.

Moffett argued that Bush’s quixotic quest represented the rightward drift of Republicans that he believed would eventually corrode Weicker’s centrism. “This entire episode makes clear just how important this Senate seat is to the White House and to the right-wingers in control of the Republican Party,” he declared.

Weicker, meanwhile, emerged from the Bush kerfuffle with fighting words for Moffett: “My thanks to Prescott Bush for allowing me to get to the business of 1982 – bouncing Moffett. This is a gracious act and winning politics. You’re on your own now, Toby.”

As the final month of the campaign began, the race tightened and the rhetoric intensified. Moffett hit Weicker on his wealth, saying, “This is a race between the grass roots and moneyed politics, between Madison Avenue and Main Street.”  The two also squabbled over Weicker’s relative support for defense spending, with Moffett excoriating the incumbent for his votes in favor of the controversial B-1 bomber.

During a New York Times-hosted debate on October 4th, Moffett again rang the alarm about the state of the GOP and Weicker’s vulnerability to corruption at the hands of the party’s right wing. “Mr. Weicker’s seniority is attached to the star of people like Strom Thurmond and Jesse Helms and Orrin Hatch.”

The tense race polled very closely into October. The two candidates debated each week in the Fall, and a Moffett staffer began showing up as “Flip-Flop the Clown,” who held a sign showcasing Weicker’s reversal of his initial support on Reagan’s tax cuts. Weicker found a celebrity of his own, Patton actor George C. Scott, to deliver a TV ad declaring, “If you want a senator with guts…vote to reelect Lowell Weicker.”

The head-to-head contest was in sharp contrast to Connecticut’s race for the governor’s mansion, where the incumbent Democratic governor, William O’Neill, faced an anemic challenge from conservative Lew Rome and held double-digit leads in most polls.

Then, on October 13th, the polling got weird. A Hartford Courant poll suddenly had Weicker ahead by 16 points, 49% to 33%.

The same day, however, a New York Times poll led to a startling different outcome: Moffett led Weicker by 5 percentage points, 43% to 38%.

“I think I’ll put my faith in my hometown newspaper,” Weicker quipped.

On October 14th, the Times published an article acknowledging the disparity between the polls and reached out to their consulting polling expert, Dr. Irving Crespi, in an attempt to get to the bottom of the 21-point split. Crespi was a longtime Gallup pollster who had served as Executive Vice President of the organization in the 1970s.

To try to make sense of the discrepancy between the Courant and their own poll, the Times ran a follow-up experiment in late October. This time, pollsters asked half of the respondents in the Courant order – Senate first, governor second – and half in the Times order – governor first, Senate second. The Times found that when they went by the Courant order, Weicker dramatically outperformed Moffett. But when they stuck to their earlier method of asking about the governor’s race first, Moffett was still competitive. The October 13th pattern had reoccurred.

The Times released the updated numbers on October 27th, with the headline “New Survey by the Times Shows Weicker Leads Moffett.” The Times’ survey director, Dwight Morris, confidently stated, “Coattails is really the only explanation that makes sense at this point in time.”

Crespi summed up the phenomenon of the “coattails” effect: ”Once voters express their support for O’Neill, they are apparently tipped into a Democratic pattern.”

President Carter’s chief pollster, Pat Caddell, also suggested a certain in-grown Connecticut party loyalty, telling the Times, “Because of the tradition and history of party-lever voting in Connecticut, there may be some experiences that people are drawing on.”

The Courant, however, also released a new poll the same day that showed – using the same ordering as in their earlier poll – a dramatically shrunken Weicker lead, at 42% to Moffett’s 40%. The “coattails”explanation, then, was under fire. “The New York Times story on their poll this morning was apologetic, hedging, very un-confident,” said the Courant’s lead pollster, Donald Ferree. “I think they’re vastly overstating the case of coattails.”

Moffett supporters used the polling mess as a means of disregarding the prognostications altogether. Stanley Greenberg, a Democratic pollster in New Haven, told the Courant on Halloween, “This is a case of the pollsters being more volatile than the public.”

“Our campaign has come to disregard the Hartford Courant poll,” Moffett told the Courant in a moment of particular directness on November 1st. “It is a most unprofessional poll, done in, we believe, an irresponsible way.” The candidate even offered a cute family anecdote: “I told my hockey-playing son, don’t stop playing until you hear the buzzer sound.”

On November 2nd, 1982, Weicker beat Moffett by just over 4% – 50.4% to 46.1%. The significance of the back-and-forth between the Courant and Times polls, and the resultant impact of the controversy on the race, would remain a subject of debate. Weicker, however, expressed gratitude for the battle: “It was the toughest race I ever had and the best opponent I ever had…[Moffett] is a class act.”

Weicker would face an even tougher race in 1988, when he lost his next re-election campaign to Democrat Joe Lieberman, who ran to the right of Weicker and had the endorsement of National Review founder and conservative kingmaker William F. Buckley.

The battle between Weicker and Moffett, in both its complicated ideological faultlines and in its preoccupation with clashing polls, is a reminder of the inherent surprises and slipperiness of public opinion in the final weeks of a campaign – a lesson that many learned anew over this last week.

For more on Weicker’s perspective on the 1982 race and on his brand of Republican politics, check out his 1995 memoir, Maverick: A Life in Politics. 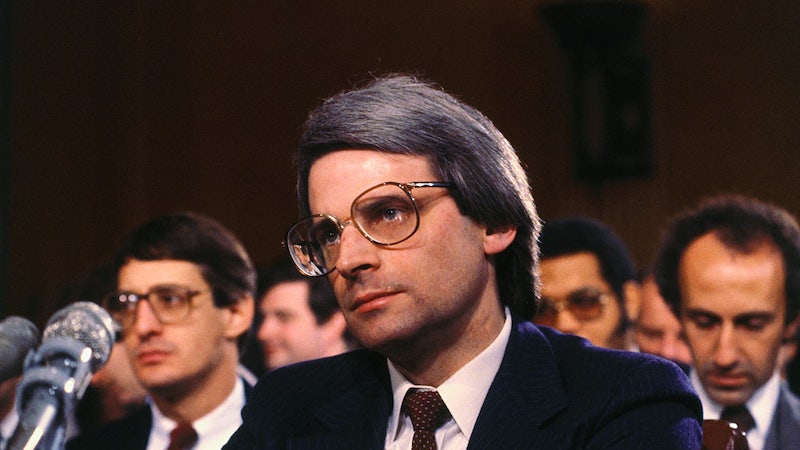