The United States Department of Justice executed a search warrant at the home of the former president this week. You knew that already, of course. But it’s such a stunning development that it needs to be typed out and seen in black-and-white to be believed.

There’s so much we don’t know right now. But there also is plenty that we do know, for sure. So let’s start with those islands of certainty in a sea of unknowns.

First, to get a search warrant, prosecutors must establish that they have probable cause that a specific federal crime was committed. On one hand, I can tell you from experience that probable cause is not nothing. The prosecutor must write out an affidavit, citing specific evidence and identifying a particular federal law that was violated. These documents typically are long and detailed; I’ve done 30 and 40-page affidavits, and they can run to well over a hundred pages. (Note that neither Trump nor the public have this document yet, and won’t unless and until there’s a criminal charge.)

Importantly, a federal judge must review the affidavit and can either approve or reject the prosecutor’s search warrant application. While judges usually approve the request, this is no rubber stamp. I’ve been through the process more times than I can count: the prosecutor walks the affidavit over to the judge, the judge reviews it, and then the judge comes out with a thumbs-up or thumbs-down. Candidly, some judges read the affidavits more carefully than others. I’ve had judges come back with signed warrants so quickly that they couldn’t possibly have even skimmed the documents. But you can bet that the judge who signed off on the Mar-a-Lago search warrant scrutinized every word. Keep this in mind when you see the cries that DOJ went rogue here to target Trump politically: a federal judge, from a separate branch of government, had to review and approve the search warrant before any law enforcement agent could step foot in Mar-a-Lago.

On the other hand, to paraphrase Ernest Hemingway: brother, don’t let anybody tell you there isn’t plenty of water between probable cause and proof beyond a reasonable doubt. Yes, it’s a big deal that DOJ obtained a search warrant. But that by no means ensures that there will be a criminal charge – never mind a conviction, which sits on an even more distant shore.

Naturally, we all want to know what federal crimes might be in play here. Given the reporting that the search warrant focused on documents that had been removed from the White House and taken down to Mar-a-Lago, I see two potential candidates. The first law applies to anyone who wilfully conceals or destroys any official federal document, and the second covers mishandling or destruction of classified information or documents.

Here’s the part that jumps off the page: under the former statute, a person who is convicted can be sentenced to up to three years in prison – and, if the person is the custodian in charge of that document, he “shall forfeit his office and be disqualified from holding any office under the United States.” This is an anomalous law. For the most part, a person can be convicted of virtually any crime yet still serve in public office, including the presidency. But the document custodian law is the rare exception – a law that specifically prohibits a person from holding future federal office.

But it’s not quite so simple. (It never is, really.) Any person convicted under this law would surely challenge the constitutionality of the disqualification provision. The argument, in sum, is this: the Constitution itself gives us specific criteria required to be president – 35 years old, natural born citizen, fourteen years residency. It is unconstitutional, the argument would go, for Congress to pass laws adding more criteria or disqualifiers to that list. We don’t know precisely how this would come out – there’s no on-point precedent – but there are compelling arguments against the disqualification feature.

Now, to the question that you’re all wondering. (I can practically hear you…) Does this mean Trump will get charged? My first answer is, of course, we just don’t know. There’s no national (or even regional) data on this, so I’d have to draw on my own fourteen years’ worth of experience as a federal and state prosecutor. I’d ballpark it like this: a search warrant is often, but far from always, a precursor to a criminal charge. Sorry, I know that’s broad and hedgy. But it’s simply impossible to slap a percentage on it.

And keep this in mind: this is no ordinary search warrant. This isn’t your standard narcotics operation where law enforcement agents search a house, find a few kilos, and the charge follows. Here, we’d be looking at rarely-invoked, intent-specific crimes involving a person who is at once the most loved and most hated political figure in America. Nothing would come easy to prosecutors.

The clamor now, at least from many leading Republicans, is for Attorney General Merrick Garland to make some type of public statement detailing why he authorized the Mar-a-Lago search. Given Garland’s stubborn reticence, there’s almost no chance he does this. Nor should he. An extrajudicial statement by DOJ might temporarily satisfy the public curiosity – heck, I’d tune in – but it would be a prosecutorial and policy disaster.

First, no half-decent prosecutor would ever open the books publicly on an ongoing investigation. It hardly requires explanation why this is the case. Does Bill Belichick share his playbook with other NFL coaches? Does Phil Ivey flip a hole card to show the other players at the poker table? And if Garland did get behind the mic and describe the basis for the search warrant, where would it end? Would he need to update the public periodically, as facts evolved? What if there was a major breakthrough on the eve of midterms? The potential for danger is limitless. For one example of a worst-case scenario, recall how James Comey painted himself into a corner by dishing publicly about the Hillary Clinton investigation on the eve of the 2016 election. Nobody should want a repeat of that debacle, in either direction.

And then there’s this: if those politicians calling for a full statement from Garland got their wish, they just might not like the result. We know that DOJ has established, to the satisfaction of a federal judge, that a crime probably was committed and evidence would likely be found at Trump’s home. Should Garland get up and hold a presser explaining that? Should he lay out DOJ’s evidence establishing the likely crimes committed by Trump? Wouldn’t certain Republicans (rightly) cry foul at that? Would it serve Trump, or his political supporters, or any person subject to any investigation, to have the AG stand up behind a podium and lay out the evidence of his potential crimes, before any charge is filed?

I’ve certainly been critical of Garland in this space and elsewhere, and I’m sure I’ll keep it up. But on this count, his reticence and his by-the-book institutionalism are distinct virtues.

There is still so much yet to play out. While we all naturally yearn for answers, we likely won’t get much clarity anytime soon. This much is clear: DOJ has taken unprecedented action, and has raised the stakes for Donald Trump, and for itself. 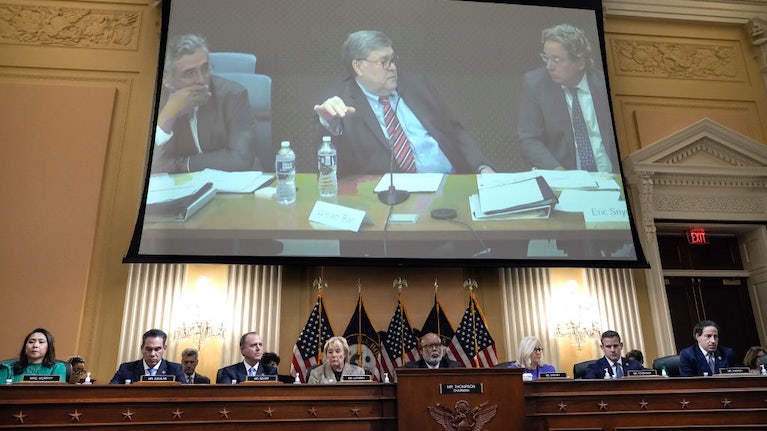