The pandemic continues to spread and the news continues to proliferate. As I discussed with New York Times reporter Peter Baker this week, it is the defining story of our time, for every type of reader and for every type of journalist. Not just for those who cover healthcare, but also for those who cover politics, science, economics, business, foreign policy, cybersecurity, entertainment, and even sports. The primary focus so far has nonetheless been on medicine – treatment, mitigation, testing. And as the deaths mount, there is an increasing attempt to wrap our heads around the toll. CNN carries a near-constant case and death tabulation onscreen. Reporters are fanned out all over the country, reporting from virus hot spots.

As the overall numbers numb us, particular cases make headlines because of the fame or power of the infected person. Think Tom Hanks four weeks ago. Think UK Prime Minister Boris Johnson being transferred to the ICU this week. Here’s how the New York Times described the virus’s reach, in the wake of reports of widespread infection within the Saudi Royal family:

“Like the hospitalization this week of the British prime minister or the deaths last month of several top Iranian officials, the affliction of the al-Saud royal clan is the latest evidence of the pandemic’s egalitarianism. The virus afflicts the richest princes and the poorest migrant workers with no discrimination — at least, until the moment they begin to seek testing or treatment.”

That last caveat is key. It is also understated. There is an emerging understanding that the effects of this virus are not egalitarian at all, that systemic discrimination and inequality may underlie the disproportionate deaths among some groups, at least in the United States. When we look back on this pandemic, “egalitarian” will not be the first word that leaps to mind. Today the story is about medicine; soon the story will be about justice and equity. In fact that storyline is already here.

Consider the rate of fatality in African-American communities in the U.S. According to cable news reports I’ve watched in the last 24 hours:

Those disproportionate figures are being seen all over the country. The reasons are being debated, but the factors contributing to this inequality long precede the arrival of the pandemic. They include poverty, structural racism, and lack of access to quality healthcare (especially preventative medicine). Any after-action accounting of the virus’s consequences and government’s failures will have to reckon with these, especially because a top priority going forward will be preparedness for the next pandemic, which may not wait another century to plague us.

There will be many other debates about fairness and justice in America, too, as the virus lays bare so many embedded inequities and imbalances. In many European countries, for example, millions lost their jobs but not one lost health insurance. That’s not what happened here. There were 6.6 million new jobless claims this week, most of them also marking a simultaneous loss of health insurance. Progressives have been sounding the alarm for some time, but the Coronavirus has brought more sharply into view than ever the weakness of a system that largely ties healthcare to employment.

There will be debates about privileged access to tests. In the early stages of severe scarcity of tests, why did NBA players and certain rich people and senators like Rand Paul get tests when they did not meet the criteria that caused hospitals to turn away thousands of similarly-situated Americans?

There will be raging acrimony about the fairness of distribution of relief funds. Will undocumented workers who fuel basic industries and who pay taxes be left out in the cold? Will greedy and self-dealing corporations be disproportionately aided? Will political connections and donor status determine who gets money and who doesn’t?

There will be other questions too. Was enough done to protect Asian-Americans from abuse, discrimination, and hate crimes? Did supplies and ventilators and PPE materials get distributed fairly? Was there an improper motive for some people to push hydroxychloroquine? What, ultimately, is the deal with those senators who traded suspiciously in stock after a harrowing briefing by the CDC? And I haven’t even touched the issue of unfair and unsafe voting rules for elections in the wake of the pandemic; that is a brewing nightmare.

There will be a lot of villains and a lot of cover-ups. This we know. The question is will there be accountability and change. This is a medical story, of course, but it is now a story about justice and fairness too.

Be well and be kind.

VOTING IN THE TIME OF CORONAVIRUS 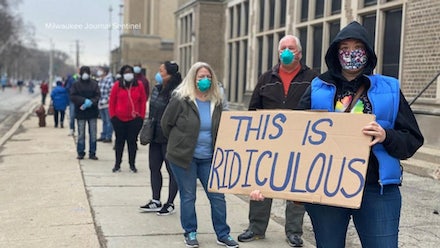 This week, after a flurry of last-minute litigation and political maneuvering, Wisconsin held its primary election — in the middle of a pandemic, with the state under a stay-at-home order, and against the wishes of its own Governor.

On Monday, the Wisconsin Supreme Court blocked an executive order issued by Democratic Governor Tony Evers which would have suspended in-person voting and postponed the election until June. In doing so, the court ruled in favor of Republicans in the state legislature, who had been fighting for weeks to allow the election to proceed as planned.

The alarming scene that ensued — long lines of elderly voters wearing homemade masks, poll workers in hazmat suits — sparked a national outcry. However, experts warn, Wisconsin is not an isolated incident but rather the opening round of a nationwide partisan legal battle over voting rights.

“This entire mess in Wisconsin is a cautionary tale,” said Wendy Weiser, director of the Democracy Program at the Brennan Center for Justice at NYU. “It’s a real warning of what could happen in many places across the country if we don’t put in place new systems to run the election in the face of the pandemic.”

At the heart of the plan is a familiar proposal: voting by mail. Five states — Oregon, Washington, Utah, Colorado, and Hawaii — already conduct their elections entirely by mail or send an absentee ballot to every single registered voter. Sixteen more states allow voters to request a no-excuse absentee ballot.

According to Dale Ho, the director of the ACLU’s Voting Rights Project, expanding vote-by-mail should be the top priority: “We have to make it as easy as possible for Americans to vote by mail in 2020, and to prepare for a likely surge in absentee ballots.”

Yet the issue remains a sticking point for Republicans. On Wednesday morning, hours after the polls closed in Wisconsin, President Trump tweeted, “Republicans should fight very hard when it comes to state wide mail-in voting. Democrats are clamoring for it. Tremendous potential for voter fraud, and for whatever reason, doesn’t work out well for Republicans.”

Trump’s false claims of extensive voter fraud are not new, but the motivations behind his war on vote-by-mail have grown increasingly transparent in recent weeks. Following last month’s passage of the coronavirus stimulus bill, Trump told Fox News that Democrats were advocating for provisions that would allow “levels of voting, that if you’d ever agreed to it you’d never have another Republican elected in this country again.” And Trump has backup: the Republican National Committee has built a team of nearly two dozen GOP officials and lawyers dedicated to voting issues; in addition to Wisconsin, they are actively involved in litigation in Pennsylvania, Georgia, and New Mexico.

What tactics might work to overcome these threats? The most likely option, according to experts, is tying vote-by-mail funding to any future coronavirus legislation. In a piece in the National Review, Northwestern Law Professor Joshua Kleinfeld argues:

Changes in voting procedures do require political action now. First, Congress needs to approve funding. States that already are cash-strapped from the pandemic’s economic fallout will need money to cover expenses such as printing and mailing excess ballots.

The last stimulus bill, which allocates $400 million for election procedures, doesn’t come close to the estimated $2 billion that a vote-by-mail program would cost if implemented across the country. Senate Democratic Leader Chuck Schumer has already indicated that “election integrity” will be a priority for the “Phase 4” package, though a bitter partisan fight is expected.

States, too, can take steps to protect the integrity of the election by expanding vote-by-mail — though some face unique barriers. According to the ACLU’s Ho, some states, like New York, which requires a constitutional amendment to introduce vote-by-mail, “should consider designating the declaration of a statewide public health emergency as a permissible reason for requesting an absentee ballot.”

How concerned are you about the legitimacy of the election? Should vote-by-mail and other election procedures be a priority for the next stimulus package — or should the focus remain on the public health crisis and the economy?

Let us know your thoughts by writing to us at [email protected], or reply to this email. 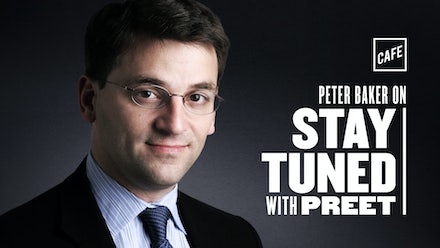 This week’s guest on Stay Tuned is Peter Baker. He’s the Chief White House Correspondent for The New York Times and a political analyst for MSNBC. Baker has covered four presidents during his career: Bill Clinton, George W. Bush, Barack Obama, and, now, Donald Trump. His recent bylines reveal what’s happening behind the scenes as the administration struggles to form a united front and respond to this public health crisis.

In this excerpt, Baker explains why Trump’s usual tactics don’t work on a virus:

Trump is a strong president because in some ways he likes to have a foe, a foil, an enemy, an adversary—somebody he can go against, whether it be Hillary Clinton or Nancy Pelosi or Chuck Schumer, and he can give them derogatory nicknames. That’s in his element, that’s where he feels most comfortable, that’s where he feels most confident, that’s where he manages to set the tone of the dialogue. He commands the dialogue in a way that nobody else can, partly because he’s president and partly because of the force of his approach. It doesn’t work with a virus. It doesn’t work with a pandemic. He can’t tweet it away. He can’t bully it away. He can’t talk it away.

Listen to today’s episode and bonus, and share your thoughts by writing a review or emailing us at [email protected]

Wendy Weiser is the director of the Democracy Program at the Brennan Center for Justice at NYU Law School. She is on the front lines fighting to expand voting rights and protect the legitimacy of our elections — and she posts informative content to keep us all up to speed on the latest developments. Follow her @WendyRWeiser 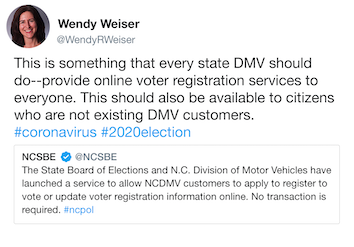 If you haven’t already, listen to this week’s episode of the CAFE Insider podcast: “The Oversight Wars” and follow along with this transcript.