The weekly note from Preet is part of the CAFE Insider membership. To get access to all exclusive content, try the membership free for two weeks at cafe.com/insider.

There is a tradition in the SDNY, and I imagine in other prosecutors’ offices too, which is this: supervisors try to find an opportunity to give positive feedback to Assistant U.S. Attorneys trying a case, but before the verdict is known: “You worked hard, tried an excellent case, whatever happens, you should know I’m proud of you.” The point is to praise the effort, if deserved, rather than the outcome. Justice is less about results than about a fair and fair-minded process. Positive outcomes sometimes overstate the quality of the effort, and adverse outcomes can wrongly obscure it.

In my book, Doing Justice, I compare the uncertainty of jury verdicts to the uncertainty of election outcomes, based on a 2016 quote from chess Grandmaster (and this week’s Stay Tuned guest) Garry Kasparov. As Kasparov noted on the eve of the election that year, “That nervous feeling you have about tomorrow, Americans? That’s democracy working. Unpredictable elections, what a luxury!”

The same is true as a jury verdict looms, as I wrote: “That nervous feeling you have when the jury comes out, prosecutors? That is justice working. Unpredictable verdicts, what a luxury.”

I don’t know what will happen next week. The jury is out, as they say. But if I might extend the trial analogy, before the results cloud the quality of many people’s patriotic actions, it is worth reflecting on those efforts before we know how the vote goes, before the celebrations or recriminations begin, as the case may be.

How has the case against Donald Trump been prosecuted? There have been stumbles and setbacks, but in the main, I believe the case has been made with vigor and passion and ineluctable logic.

Joe Biden was not every Democrat’s first choice, but I am proud of how he has methodically exposed Trumpism for its emptiness, incompetence, and heartlessness. He and Kamala Harris have done it with class and with grace; they have managed to go high and assemble a broad coalition who desperately want their country back.

I am proud of every voter who has stood in line for hours or driven long distances, in the face of an unchecked pandemic and massive voter suppression, to do their most patriotic duty: cast their ballots. We will have the greatest turnout in more than a century, as each separate, quiet voice combines, at the end, in a rousing chorus.

I am proud of the public servants who resisted abandoning their principles, who kept their loyalty to country not cult, and bravely accepted the consequences of doing the right thing. So many people come to mind, including Lt. Colonel Alexander Vindman and Ambassador Marie Yovanovitch.

I am proud also of the dedicated professionals who investigated, and sought to hold accountable, an out-of-control president. Robert Mueller was met with vitriolic attack, endless second-guessing, and sometimes deep disappointment, but he took on a thankless job because he is a patriot and I will always be grateful to him for it. Adam Schiff, among others, took on what may in hindsight appear to have been an uphill, even Quixotic, task to remove a sitting president for his abuse of power. Trump may have been acquitted, but everyone who aided in that effort helped to make the case that will be decided soon by the rest of us.

Some may express their dubiousness, but I am proud of all the erstwhile Republicans who are trying to rid the republic of the most unfit leader in its history. Some of them may have historical debts to pay and any alliance may fracture over policy preferences in the future, but I welcome my patriotic allies in this singular cause. And when the pandemic has run its course, I will proudly shake their hands.

I am proud of all the journalists and ordinary citizens who pushed back mercilessly against the President’s most disgusting policies and pronouncements – those who protested the Muslim ban and intentional child separations at the border. Tuesday’s judgment will rest in no small part on these issues, championed by outraged citizens.

Above all, I am proud of every young person in America who organized, marched, petitioned, spoke up, and raised awareness about gun violence, about racial justice, about women’s rights. Nothing moves me more than a movement carried along by young people. Trump is bad for the country on all those issues, and so those causes have helped make the case against him too.

I believe a reckoning is coming, but I can’t be sure. What I can be sure of is how proud I am of the millions of people in this country who stand for what is good and right and just, who believe in decency and love, who believe our strength lies in our diversity, who make an effort to fight for those things, and who will never stop fighting for them, no matter what the election result.

I may not be proud of my president or his policies, but I have never been more proud to be an American in service to the ideals that brought my parents here a half century ago. 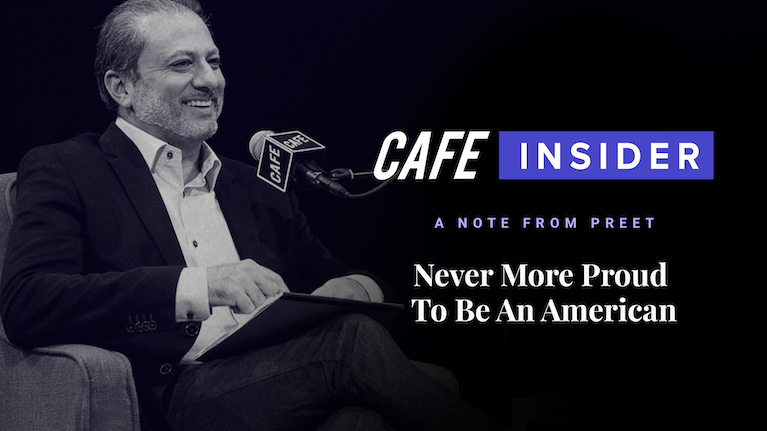 Note From Preet: Never More Proud To Be An American