When an iconic and longtime public servant passes, we grieve and pay tribute. When the deceased is a giant, like John McCain or John Lewis, the entire nation pauses. The praise and remembrance lasts, as we collectively linger on their legacies in what is usually a long goodbye.

Sitting Supreme Court Justices, sadly, are different. That is especially so when they are giants, as the consequences of their passing can literally alter the course of the country. The news of Ruth Bader Ginsburg’s death felt like a body blow from an extreme fighter; to be frank, given the year we are having, it felt like a punch below the belt. I know many of you cried. I will confess I did. The tears flowed because of grief at the loss of such a heroic person who fought her whole life, through bias and hardship and even cancer, for equality and justice. But many were also stricken because of what it might mean for the future of the Court, the country, and the very fights RBG dedicated her life to.

Twitter on Friday night quickly became a mix of memories and politics. Money poured into the campaign coffers of Mitch McConnell’s and Lindsey Graham’s Democratic opponents, as the former immediately made clear he would trash the Republicans’ own 2016 standard for election year confirmations and ram through a hard-right replacement for the Notorious RBG.

I sent a political tweet or two myself. That felt both important and unseemly. I had some trouble reconciling my feelings about this conflict. A little after 10 pm, I tweeted this:

“I don’t know about you, but I’m finding it hard to balance the need to grieve and the urge to fight in this sad moment.”

People’s views on the right reaction to the news diverged fairly dramatically. Many found it shameful for the talk to turn so quickly to replacements (even though RBG’s final statement to the world was her “fervent wish” for the next president to appoint a successor). For example, my friend Benjamin Wittes of Lawfare posted this:

“Very sad to hear the news about #RBG, an inspirational figure and genuinely wonderful person. Can we please take 24 hours to talk about her, her contributions – which were enormous – and her legacy before talking ghoulishly about the political implications of her death?”

“Ruth Bader Ginsburg deserves better. She’s not even 48 hours passed, and here we are, circling like sharks smelling blood in the water, arguing about who is going to replace her, as if her life isn’t worth mourning and celebrating FIRST. Ashamed is an understatement. Disgraceful.”

I certainly understand those sentiments. I share them a bit myself. There is grace in pausing, in reflecting on her past before obsessing about a future Court without her. But, as many others noted, we don’t quite have that luxury.

One person tweeted this:

“Fight now. Grieve later. We have decades to honor her.”

Another had this to say:

“I grieved until I read McConnell’s statement. Now I am battle ready.”

I share these sentiments also. One wonders what RBG would have wanted, especially given the final statement she dictated to her granddaughter, Clara Spera.

I especially liked how former White House adviser Valerie Jarrett, a guest of Stay Tuned, answered this question. She said: “My guess is #RBG would want you to grieve by fighting.”

I’m inclined to agree with Valerie. In any event, people are entitled to their own good faith opinions on what is proper. For my part personally and for CAFE, we have tried to honor the late Justice by doing both – spending plentiful time first looking back, in both podcasts this week, but also being clear-eyed about the future because so much is at stake. 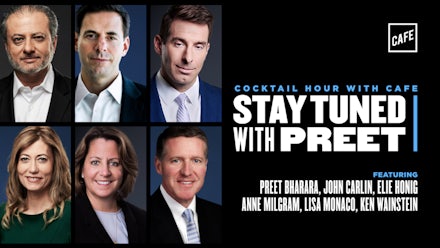 Editor’s Note: “Question Presented” is on hiatus this week, but we do have questions for our readers. Faced with the very likelihood of a 6-3 conservative supermajority, some democratic lawmakers have floated expanding the number of justices to 11 or even 13. Others have suggested imposing 18-year terms, whereby the justices would remain on the bench and serve on lower federal courts once their term concludes. Preet and Anne discussed both of these proposals on this week’s episode of CAFE Insider and Professor Melissa Murray weighed in with her thoughts on today’s episode of Stay Tuned. Now, we’d love to hear your thoughts. Write to us at [email protected] or reply to this email.

And be sure to email us at [email protected] with your questions for all CAFE staff and hosts: Preet Bharara, Anne Milgram, Lisa Monaco, Ken Wainstein, John Carlin, and Elie Honig.

Howard Mortman, Communications Director for C-SPAN, has been sharing meaningful photos from events celebrating RBG’s life and digging into the archives for images and videos that provide context for the coming confirmation battle. Follow him @HowardMortman

— Add the CAFE Insider feed to your favorite podcast player.

— Listen to this week’s episode of Stay Tuned, “RBG & The Mountains She Moved,” featuring NYU law professor Melissa Murray. And don’t miss the bonus, where Murray discusses her time clerking for then-Judge Sonia Sotomayor on the Second Circuit Court of Appeals.

— Listen to this week’s episode of CAFE Insider, “The Glorious RBG,” with Preet and Anne taking a deep dive on the Justice’s legacy and the issues raised by the newly vacant Supreme Court seat.

— Look out for Friday’s new episode of Cyber Space, featuring the New York Times’ Kara Swisher in conversation with John Carlin about TikTok, the government’s role in tech, and more