This President and his advocates never miss an opportunity to embrace theories of broad presidential power. His Attorney General famously espouses an aggressive view of executive authority. One of his impeachment lawyers, Alan Dershowitz, has been contending all week that the President has unassailable power to engage in all manner of impropriety, quid-pro-quo, and electoral self-dealing.

Dershowitz’s most eye-popping claim came yesterday when he said on the Senate floor that the President may even engage in strong-arm tactics to enhance his personal election prospects (including pressuring a foreign government to announce investigations into his foremost political rival). Why? Because the President, like all politicians, in good faith believes that his own reelection is in the public interest and so anything goes. That’s the logic, which is shared by literally no other scholar.

Trump himself loves to trumpet the powers he purports to enjoy. He says, “I have an Article II, where I have the right to do whatever I want as President.” He says he can pardon anyone, even himself. He has, moreover, made no secret of his admiration for, and envy of, actual despots. Examples abound.

And to a degree they are absolutely right. We talk about the principle that no one is above the law, but of course the President is above the law in an important sense. Per DOJ guidance, he cannot be indicted while in office. He is the only human being in America with such immunity. He is unique.

He is unique in other ways too. Only the President can order a nuclear strike. Or declassify secrets with impunity. Or speak from the oval office. Or negotiate a treaty (though Congress must ratify). And so on and so on.

Ironically, it is the presence of these special powers – these unique powers – that rightly subjects him to impeachment and removal for actions that may not themselves constitute formal crimes (which has been the hotly contested legal and Constitutional issue throughout impeachment). The President’s unique power is, I submit, also his kryptonite.

How do I mean?

Consider the commentary of one former Stay Tuned guest, Harvard historian Jill Lepore, who wrote about the purpose of impeachment in The New Yorker. She deftly crystallized the issue in a way I constantly think about:

This is, and always has been, the key point in my mind. There are gross transgressions that only a President is capable of and those must be punishable by the people. It cannot be right that we would bestow upon our top leader, in a deep democratic leap of faith, special latitude and protection and then permit that leader to betray us and bootstrap those privileges into a kind of totalitarian immunity from all accountability. That would be perverse, unjust, and anti-democratic.

Some simple hypotheticals may clarify the point, as they speak to the unique power we give to every President.

The President, for example, has inherent and original power to classify and declassify secrets. And so if the commander-in-chief chooses to declassify something sensitive, that’s it. It enters the public domain, no matter how unwise the decision, and there is nothing anyone can do about it. It cannot, by definition, be a crime. That grant of unreviewable authority has, throughout history, presupposed a competent and good faith actor in the presidency.

Not one of those breaches of trust and duty is a crime (some might argue it’s treason but if we are not at war with a foreign power, it would not be). No statute constrains the President in such matters. Would Alan Dershowitz or anyone else seriously argue that these would not be impeachable offenses? Would all the lackeys who bray about the absence of a purely criminal statutory citations in the articles of impeachment – to bribery, extortion, or something else – really countenance these legal and Constitutional acts that could lead to national destruction and ruin? These are rather extreme hypotheticals, but as law students learn, it’s often the slippery-slope scenarios that expose the weakness of bad arguments. That is true here. I am not comparing the extortion of President Zelensky of Ukraine to the disclosure of our nuclear codes, but the point is to explode the repeated and farcical claim that impeachment may only follow a clear criminal violation. That’s bunk.

We give unique power to the President so that he can protect us. But that grant of power necessarily means that a nefarious President can do untold harm. Presidents can’t be permitted to work such harm without accountability. That is true on a smaller scale for cops, for intelligence officers, and for prosecutors, as well as for senators and governors.

It must true for Presidents too. 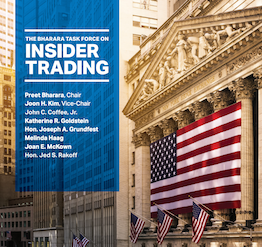 Before Preet was fired by President Trump, he spent the better part of a decade prosecuting some of the most high-profile insider trading cases in the country as the U.S. Attorney for the Southern District of New York.

In his years at the helm of SDNY, Preet secured close to 100 convictions of Wall Street executives for insider trading.

This week, Preet — along with a task force of legal scholars, judges, former prosecutors and regulators — released a report urging Congress to clarify and strengthen insider trading laws.

What is insider trading and why do we need to improve our laws?

Insider trading is when individuals with special access to secret information profit from trading based on that information. While most agree that this kind of behavior is improper, our current insider trading laws do not reflect commonly understood principles of fairness – and they are much too ambiguous to be applied consistently.

In the absence of legislation from Congress, insider trading law has been cobbled together by the courts on a case-by-case basis. And instead of focusing on fairness – specifically, the potential harm done to the counterparty in a trade or the broader market – the courts have focused on the idea of fraud or deception committed against the holder of the information.

As the report outlines, the courts have also introduced the concept of “personal benefit” as a way of distinguishing between an act of self-dealing and a legitimate “corporate” purpose. Most significantly, in its 2014 decision in United States v. Newman, the Second Circuit Court of Appeals articulated a narrow “personal benefit” standard, requiring “proof of a meaningfully close personal relationship that generates an exchange that is objective, consequential, and represents at least a potential gain of pecuniary or similarly valuable nature.”

Newman threw insider trading case law into further confusion and uncertainty. In the wake of the decision, convictions were overturned, defendants were allowed to withdraw guilty pleas, and prosecutors were left wondering: What counts as a “meaningfully close personal relationship”? Can an individual legally tip off a friend with secret information as long as he or she did not receive or expect to receive a financial benefit in return?

The answer, according to the Bharara Taskforce, is no. The taskforce has advocated for the elimination of the “personal benefit” requirement. Instead, they argue, we should have a “wrongfulness” standard – something that reflects a common understanding of fairness and not just instances of “deception” or “manipulation” as the law currently requires. The “wrongfulness” standard would include deception and fraud, but it would also include “breaches of duties of trust or confidence,” as well as theft or “unauthorized access to devices, documents or information.”

Insider trading is an issue that goes to the heart of the public’s confidence in our markets. Do the same rules apply to everyone or do the wealthy and powerful play by a different set of rules? Congress has an opportunity to both clear up legal ambiguity and help restore public faith – and a recent, overwhelmingly bi-partisan insider trading bill passed by the House shows a willingness to take on this issue. Preet and his taskforce are clear: Congress should finish the job.

What do you think? Should an individual who does not benefit financially from providing inside information be subject to prosecution for insider trading? You can find the full report here. Let us know your thoughts by writing to us at [email protected], or reply to this email. 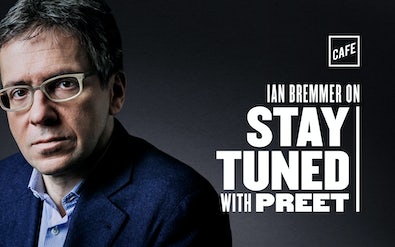 Ian Bremmer is this week’s guest on Stay Tuned. He is the founder and president of Eurasia Group, a global risk and research firm. It recently published its annual report on top global risks, and this year, for the first time, U.S. domestic politics tops the list.

In this excerpt from the interview, Bremmer tells Preet why impeachment and the upcoming election are likely to trigger a crisis:

Impeachment is about to be broken as a constraint on the U.S. executive, in the run up to the 2020 elections. I mean, he will be acquitted despite having clearly abused power in an effort to tilt the election in his favor. He is then running for election. He will continue. And that’s never happened before. That’s never happened before. And I also believe that the election is likely to be close. If I thought it was going to be a landslide in either direction, I would be less concerned about the U.S. as a risk…I think there’s a high likelihood that we will go through elections in November. And there will be a winner. And we will not know if that person is going to be president in 2021.

If you haven’t already, listen to today’s episode, the bonus, and share your thoughts with us by writing a review or emailing us at [email protected].

Ryan Goodman (@rgoodlaw) is a law professor at NYU, the co-Editor in Chief of the legal blog Just Security, and the former Special Counsel at the Department of Defense. He has provided invaluable analysis of the ongoing impeachment hearings, including on the implications of the recent Bolton revelations.

If you haven’t already, listen to the latest episode of the CAFE Insider podcast: “Nuts and Bolton” and follow along with this transcript.

Also this week, a special Insider bonus: Preet spoke with Susan Hennessey and Ben Wittes, the editors of Lawfare and authors of the new book “Unmaking the Presidency: Donald Trump’s War on the World’s Most Powerful Office.”

Additionally, for those of you who are in the New York City area, Preet will be joining political consultant Rick Wilson on Feb. 5th to discuss his book, “Doing Justice.” Get your tickets and your paperback.