CAFE Insiders can enjoy this recording of Preet reading his note, “56 Days Later, A Creeping Sense of Squandered Time,” and read his note in the CAFE Insider Newsletter every Thursday.

Seventy-nine years ago, in the summer of 1941 and just months before America went to war, a beloved ballplayer set a record that stands to this day. It is a sports feat that many think will never be surpassed. Between May 15th and July 17th of that year, Yankee center fielder Joe DiMaggio successfully hit in 56 consecutive games. No one had ever had such a hitting streak before, and no one has since. DiMaggio, who later went on to marry Marilyn Monroe, stands alone.

Why do I mention this? Well, because of a cosmic coincidence that bears noting. It occurs to me, as I sit in my basement writing this note in the middle of a global pandemic, that I have set something of a parallel personal record. As of today – May 7, 2020 – I have successfully stayed at home for 56 consecutive days. That’s right, folks. Fifty-six days. Now, that may not impress you so much because my streak demanded no athletic prowess whatsoever. Indeed, it called mostly for sitting on my behind and overeating. More likely, it doesn’t impress because many of you and millions of other people in America and around the world can boast similar streaks. Fair enough.

But as so many of us are in the same boat, I thought I would confess something. As I reflect on my streak – which would have been unthinkable even four months ago – a new feeling has surfaced. On top of the sadness, incredulity, and anger is a creeping sense of squandered time. To be sure, I’ve been working, putting out podcasts, writing, editing, teaching, and … tweeting. But there’s no more commuting, no more public speaking, no more socializing, no more functions to attend, and no more planes to catch. So, as a matter of math, I have more time on my hands. Time, as the wise say, is our most precious commodity, because it is finite and non-renewable. There is no lottery or luxury quite like found time. And so, as I take stock, I am wondering what I have to show for it.

I am no fitter, smarter, or saner. I’ve had no transcendental epiphanies. I don’t have a new book proposal. I’m not beating any deadlines; existing work, as it is wont to do, expands like a gas to fill up the extra time. I have no new hobbies. I’m not even better rested.

Of course, my quarantine is not entirely without accomplishment. I got Apple TV and watched all three seasons of Ozark, both seasons of Barry, three seasons of Curb Your Enthusiasm, and multiple Mike Birbiglia comedy specials. I treated my kids for the first time to Godfather I, Godfather II, The Shawshank Redemption, and Good Will Hunting. (Our brave and defiant plan to view Contagion has not yet materialized.)

I’ve also done some things to reverse domestic entropy: six-year old medicine bottles are discarded, my basement workspace is much less cluttered, my bookcases are a touch more organized, and I finally managed to connect my laptop to our wireless printer. I’m proud of these home improvements, especially the last one, pathetic as it may seem. And there are, as I’ve said before, daily meals with all the kids, which is the only real treat in these times.

But again, as a normally industrious and striving person, I wonder whether I should have more to show for it. Maybe that’s my internal Type-A taskmaster talking, leveling his typical unfair allegations at me, paying no mind to the once-in-a-century devastation unfolding around us. It’s another version of the somewhat cynical maxim: never let a crisis go to waste. But anxiety about the pandemic is an invisible time-suck, and total uncertainty about the future can surely crowd out industrious impulses. It takes a while to get used to the new normal, the upending of routines, the sameness of the days. It seems hard to plan stuff when you can’t remember what day it is. Or when you never have to wear pants. It’s easy to be adrift these days. Do you agree or am I alone here?

Maybe the feeling will pass. Or maybe my sudden awareness of it will be a kick in the pants. In any event, I’m not going to worry about it too much. There’s enough else to fret about. If I manage to write a book of poetry or turn into a marathoner or become a Chaucer expert in the coming weeks, I will certainly brag about it to all of you right here in this space. In the meantime, thanks for this therapy session.

By the way, here’s the other difference between my streak and Joe DiMaggio’s. His ended at 56. Mine will last a lot longer. As will yours. And so if you’re fortunate enough to have some found time in this mess, use it however you wish. No judgment.

Be well and be kind. 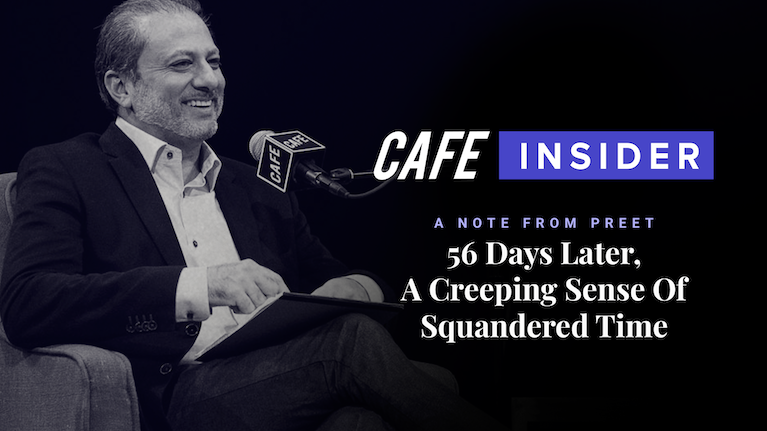