I’m exhausted, as I know you must be. So I’ll be brief.

Like me, I’m sure you are glued to the news, waiting for the moment that Joe Biden secures enough votes to be declared the President-elect. I’m very confident that this will happen soon.

And yet, among many long-suffering Democrats, there is no ecstasy, no euphoria. This is so for at least a couple of reasons. First, the race is relatively close, not the rout many hoped for. Second, expectations of turning the Senate blue are largely dashed. On top of that, Democrats somehow managed to lose seats in the House. Trust me, I feel a bit glum about that too, given how much work and effort my boys put into #housework2020.

These setbacks will limit President Biden’s ambitions, actions, and appointments. And the departure of Trump, as Garry Kasparov reminded us, does not mean the end of Trumpism. But these are thoughts for another day. (Question Presented, below, addresses some of the implications of not flipping the Senate.)

Today, I want to stress how unconditionally thrilling a Biden victory will be. Though the election won’t represent a humiliating repudiation of Trump, it won’t be a ringing validation either. And that is a cause for joy.

It is hard to overstate the harm a second Trump term would have caused America and its status in the world. Under Trump, we were a nation in decline, and Joe Biden will arrest that decline.

In 76 days, we will have a better man as President. More decent. More honest. More transparent.

In 76 days, we will have the first woman Vice President. The first Black and Asian-American woman.

In 76 days, when you see the tweet of a narcissistic lunatic, it won’t be coming from the White House residence.

In 76 days, we will have a President who believes in science and who will have a national plan for fighting the pandemic, rather than fighting Dr. Fauci. He will restore the credibility and function of the CDC, the NIH, and the FDA. With any luck, Ron Klain – who managed the country’s successful response to Ebola – will be chief of staff.

In 76 days, we will have a President who will protect the Affordable Care Act, not try to gut it in the courts.

In 76 days, we will have a President who will undo a racist and xenophobic Muslim ban.

In 76 days, we will have a President who will protect Dreamers.

In 76 days, the United States will rejoin the World Health Organization.

In 76 days, the United States will rejoin the Paris Climate Agreement.

In 76 days, the United States will begin rebuilding its alliances and snubbing dictators, rather than the vice-versa.

It is thrilling to think that, in just 76 days, we will no longer be paying the salaries of people like Mike Pompeo and John Ratcliffe and Ben Carson and Mark Meadows and Stephen Miller and all the other hacks Donald Trump imposed upon us.

I could go on and on, but I’ll stop at just one more.

In 76 days, at the noon hour, Donald J. Trump will once again be an ordinary citizen, once again subject to investigation and prosecution in any and all jurisdictions. 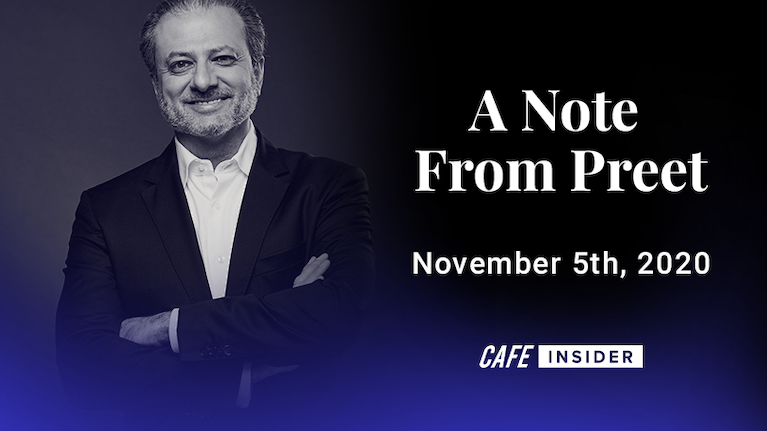 Note From Preet: A 76-Day Countdown