CAFE Insiders can enjoy this recording of Preet reading his note, “A Little Voice in Every Immigrant’s Head,” and read his note in the CAFE Insider Newsletter every Thursday.

I’ve been thinking a lot about Kamala Harris being on the Democratic ticket. Among other things, I’ve been reflecting on the spirited and happy reaction not just among most Democrats, not just among Black Americans, but the particular joy of the Indian-American community, myself included. And more particularly, among older Indian-American immigrants, many of whom were the first to arrive from South Asia in this country. People like my mom, about whom I tweeted Tuesday:

The most excited person I talked to today was my Indian mom. Because she cannot wait to vote for Vice President Kamala Devi Harris.

One South Asian writer tweeted: “I’m sort of indifferent to Kamala Harris . . . but I love that my mom is crying listening to Kamala speak right now.”

The New York Times has already published two pieces about the excited response from the community. I spoke to one of the reporters yesterday for this article, and the discussion sparked further reflection.

To emigrate to a strange country is no easy thing, even if you believe that the new country promises limitless opportunity. It is scary and sad to leave everything behind, to abandon the familiar in favor of the faraway. I first met Kamala Harris in the summer of 2007, where she wowed the crowd as the D.A. of San Francisco. I also gave a speech at that conference, which I looked up this morning because I had a faint recollection that I talked about the courage of immigrants. I said this:

This convention could only come to pass because every family of every South Asian sitting in this room – sometime in the recent past – took an enormous leap of faith. And crossed a border, often a series of borders.

My own father was born in 1939, before there even was a border dividing India and Pakistan. He was born on the Pakistani side of that boundary. But because he was a Sikh, he and his family and seven million others moved to the Indian side – giving up all of their property and most of their possessions.

My wife’s father, on the other hand, was born a few years earlier, on the Indian side of that boundary. But because he was a Muslim, he and his family and seven million more went the other way and moved to Pakistan. They also lost their homes and much, much more.

Two men, two borders crossed – but perhaps not really bridged until after they crossed into America and, 53 years later, their son and daughter were joined in marriage.

All of us here now living comfortably in America can thank those family members who endured great discomfort and distress to come West for a better life.

And we should remember that in each of those acts of migration – repeated hundreds of thousands of times – lies a quantum of courage and will and daring that few of us will ever have to summon.

For my own part, I wasn’t sure I could handle the move from Manhattan to Bethesda two years ago.

What does this have to do with the emotional reaction to Kamala Harris’s selection as VP candidate?

Part of it, I think, is this: I imagine there’s a little voice in every immigrant’s head, asking: Was it worth it? Was it the right thing to do? To leave your family, your country, your culture, your traditions, to some extent even your identity. To travel to America. Where you may or may not make it. May not be understood. May not be fully accepted. May be discriminated against. The voice must ask urgently from time to time — was this worth it?

This is the question Lt. Colonel Alexander Vindman seemed to be trying to answer during his impeachment testimony last fall, when he risked the wrath and retaliation of the President in order to speak his story. From a lonely witness table in a congressional hearing room, Vindman directly addressed his late father, who came to America 40 years earlier, a brave Jewish refugee from the Soviet Union:

Dad, my sitting here today, in the US Capitol talking to our elected officials is proof that you made the right decision forty years ago to leave the Soviet Union and come here to the United States of America in search of a better life for our family. Do not worry, I will be fine for telling the truth.

He is fine, of course, but he paid a price for his honor and was driven out of the military.

Was it the right decision, the voice asks. Mostly, I imagine immigrants like my parents answer that voice with great confidence: Yes. Yes, it was worth it. Yes, it was right. We have freedom and we have opportunity. We built a home and we built a family. We are living the American dream.

And they can be happy and proud and even relieved when their children do well. When they are accepted in business and in the community.

But there are also worries and stresses when you are a newcomer, when you are an outsider, even after years of productive life in America. Will you be accepted fully, and not just superficially, in your adopted home?

You hear the voices of hatred. You see the bans. You read the policies. You hear your president talk about shithole countries. You see hate crimes tick up. You see Charlottesville. You may wonder if your naturalization papers will be the protection you earned and proof of the love you feel.

You can sometimes wonder about your place here.

And then a woman born of a Jamaican dad and an Indian mom is tapped for the vice presidency.

And her name is Kamala Devi Harris. And she has a shot. And then there’s the little voice again. The same old question — was it the right decision?

And at that moment it becomes even more clear: Yes.

Here is a dark-skinned woman claimed by outsider communities — Black and Asian — who may soon represent the United States of America to the world.

It is in part celebration of the possible. But it is also elation at the fuck you to Stephen Miller and every other racist, xenophobe, and misogynist who fears being banished to the dustbin by this composite of all that they hate and seek to keep down.

I love America, and I am fired up. 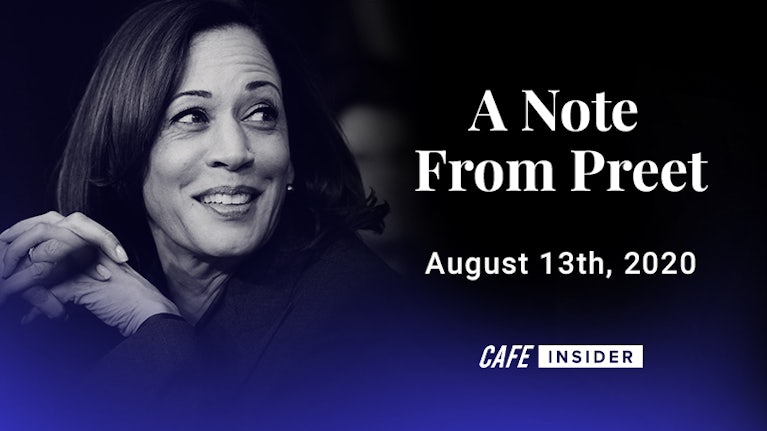 Note From Preet: A Little Voice in Every Immigrant’s Head