CAFE Insiders can enjoy this recording of Preet reading his note, “Appearances Matter, But Not to Barr’” and read his note in the CAFE Insider Newsletter every Thursday.

Attorney General Bill Barr finally appeared before the House Judiciary Committee this week. As Anne and I discussed on the CAFE Insider podcast, the hearing was disappointing in myriad ways. With a few notable exceptions, Barr’s exchanges with members were not illuminating. Some of that was the fault of the Attorney General, but much of it could be laid at the feet of Democratic Representatives, many of whom asked vague questions, poor questions, or no questions at all.

One five-minute round, however, got to the heart of the matter. It shone a light on the unprecedented nature of Barr’s personal interference in a case commenced by Special Counsel Robert Mueller and then professionally handled by career prosecutors in the Department of Justice: the sentencing recommendation to the judge in the criminal case of Trump’s friend, Roger Stone.

With a tone of righteous indignation, Barr defended his last-minute order that the D.C. U.S. Attorney’s office withdraw its sentencing brief, which recommended seven to nine years of imprisonment, and submit a new, lower recommendation of three to four years. As you have heard me say, reasonable people could differ on the proper sentencing range. In my own experience, 7-9 years for Stone’s conduct seemed high, and as Barr triumphantly noted, the judge who had complete discretion to go higher or lower, imposed the more lenient sentence. But that misses the point. Of all the cases in all the land, why did the chief federal law enforcement officer intervene in this case, which involved not only a Presidential friend, but misconduct that was designed to protect that President? To judge the action and whether it was inappropriate or unethical or corrupt, it would be important to know if Barr had quietly in other, less well-known cases brought his exquisite sense of justice to bear. Perhaps in a narcotics case or a robbery case or an immigration case? That would take some of the stink off the intervention. Maybe we would be surprised.

Well into Tuesday’s hearing, someone finally probed this issue. Congressman Eric Swalwell asked a simple and important question: “Mr. Barr, have you ever intervened, other than to help the president’s friend get a reduced prison sentence, in any other case where a prosecutor had filed a sentencing recommendation with the court?”

“Not that I’d recall,” Barr replied. There it was, a striking admission that this was a unique case of the Attorney General reaching down into the trenches to replace a filing that displeased the President, as evidenced by an irate tweet, with a filing that would mollify the President. Whether or not there is an argument that the second recommendation was more fair (and there is), the move rightly looks to the average person as special treatment at the direction of a President with a personal and legal stake in the matter. An Attorney General who truly cared about fairness would have steered clear. At the barest minimum, his action carried the appearance of impropriety.

Such an appearance, for the President and others, used to matter.

Compare the foregoing to the infamous tarmac meeting between then-Attorney General Loretta Lynch and former President Bill Clinton on June 27, 2016. Recall that by happenstance the AG and Clinton wound up at the same airport in Phoenix, while the investigation into Hilary Clinton’s emails was still ongoing. That interaction caused an uproar and was weaponized as an ethical transgression to end all ethical transgressions by the presumptive Republican nominee, Donald Trump.

I am somewhat biased in the matter because I know Loretta Lynch personally. She is a friend and former colleague, and there is no question in my mind that she would never have discussed any pending case, much less one of this sensitivity, with the former President. That is my sincere belief, based not only on my understanding of her character but also given the public nature of the interaction and her demonstrable discomfort with the entire encounter.

Still, it was a mistake. More on the part of Bill Clinton than Lynch, but it was a mistake nonetheless. In fact, the former Attorney General herself has called it a mistake and chided herself for it. The meeting was one of the subjects of a lengthy Inspector General report, and the testimony of Melanie Newman, one of Lynch’s staffers, cited in the report is compelling:

“Newman characterized Lynch as ‘devastated’ about the tarmac meeting. She stated: ‘[Lynch] doesn’t take mistakes lightly, and she felt like she had made…an incredible…mistake in judgment by saying yes instead of no, that he could come on the plane. But also, she’s like the most polite, Southern person alive. I, I don’t know in what circumstances she would have said no, or what would have happened if she had said no…. I would have much preferred a story that the Attorney General turned a former President of the United States away on the tarmac, but…she doesn’t make mistakes, and she was not pleased with herself for making this kind of high-stakes mistake.’”

Lynch felt remorse and regret, rightly so. But not for doing anything wrong – rather, because of the appearance of it.

That incident, in fact, was top of mind when the President called me on March 11, 2017. In no universe would I have talked about a pending enforcement matter with Trump even if he asked, but I ultimately did not return the call because of the appearance of it. There was no law against us talking, no precise ethical rule against having a casual conversation, but I understood – in part because of Trump’s own weaponization of the tarmac incident – that it would look awful. There would be a stench to it, and in the absence of a surreptitious recording of the conversation, it would be impossible to prove to everyone the discussion was innocent.

People make mistakes, like Loretta Lynch did. Barr, on the other hand, doubles down on what stinks to high heaven. That makes him especially dangerous for the remainder of his time in office. 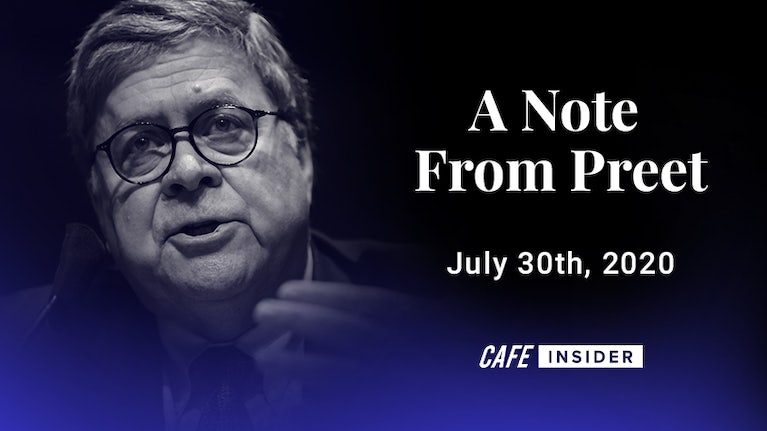 Note from Preet: Appearances Matter, But Not to Barr