Back when I was a young federal prosecutor at SDNY, like all other Assistant United States Attorneys, I did a one-year tour in the narcotics unit. It’s where, among other things, you learn how to write warrants for wiretaps, flip witnesses, and conduct trials. Soon after 9/11, I had a heroin conspiracy case go to trial. It was a three-defendant case; we had a cooperator nicknamed “The Calzone”; and the evidence was quite strong.

The case had gone in well for us and the jury was engaged when the best of the three defense lawyers rose to deliver a rousing summation on behalf of his client. In addition to arguing the facts and law, the defense lawyer used a particular rhetorical flourish. “Mr. Bharara,” he said, “has presented to you the aura of evidence. Don’t be fooled by the aura. We don’t convict people on the aura of evidence.” Then he went on to try to poke holes in some of my arguments. It was polished and articulate, but the “aura” mantra was a mistake.

The defense lawyer was absolutely correct about the principle; it just didn’t apply in the case he was defending.

The sitting Attorney General of the United States could use a reminder of that principle – conclusions should be based on evidence, not the aura of it.

Consider the 30-minute interview Bill Barr did with CNN’s Wolf Blitzer on Wednesday. There is no issue on which Barr seems to be more evidence-free than voter fraud. This has enormous import for the election, now less than nine weeks away, especially given the false narrative the President is trying to implant about mail-in voting and widespread fraud. AG Barr, the chief law enforcement officer in America, is a reliable mouthpiece for Trump’s overwrought fraud fantasies.

Though we are in a pandemic and though five states reliably have all mail voting, Barr supports as reliable only the method of voting favored by Trump supporters and disparages the method Biden supporters want to rely on. He said sharply, “This is playing with fire. . . And people trying to change the rules to this methodology, which as a matter of logic is very open to fraud and coercion is reckless and dangerous, and the people are playing with fire.” Barr said the fire thing twice, for emphasis. Meanwhile, he is inflamed by the aura of evidence. In the face of tens and tens of millions of votes reliably cast by mail in many states over decades, he says simply widespread fraud is “a matter of logic.”

Then Blitzer asked Barr about another assertion he’s made

BLITZER: But have you seen any evidence that a foreign country is trying to interfere in that way?

Barr had to concede he had not. No evidence, just the aura of it, dressed up in the guise of “logic.” Logic is important, common sense is too, but connected to evidence, connected to facts, connected to intelligence. None of that exists to support Barr’s blithe assertion. Given 2016, we should absolutely be concerned and vigilant about foreign interference, but again, based on evidence of particular and identifiable means. This language about fraud is irresponsible now, but after the election, it will be downright dangerous and inflammatory rhetoric to explain a Trump election loss. And it will be spoken out of the mouth of the Attorney General.

This focus on the supposed logic of voter fraud has backfired before, though it remains the holy grail of Republican voter suppression efforts. Remember the fanfare surrounding the creation of a White House commission on voter fraud? The New York Times described its mission: “Mr. Trump established the commission after his repeated insistence, without credible evidence, that widespread voter fraud explained how Hillary Clinton received about 2.9 million more votes while he won the presidency in the Electoral College.”

The commission was abruptly shut down in early 2018 after finding no such evidence. And yet the President and his allies still revel in the aura of commonplace voter fraud.

By the way, Blitzer asked Barr a simple factual question about voter fraud during the interview.

BLITZER: During your tenure as Attorney General of the United States, how many indictments have you brought against people committing voter fraud?

BARR: I couldn’t tell you off the top of my head, but several I know of.

For someone who mouths off confidently about the perils of voter fraud generally, and the threat of foreign ballot fraud specifically, you would think he would know this one concrete fact. Or maybe he did know but didn’t want to say, because it would undermine the aura of fraud he and the President are so desperate to amplify. 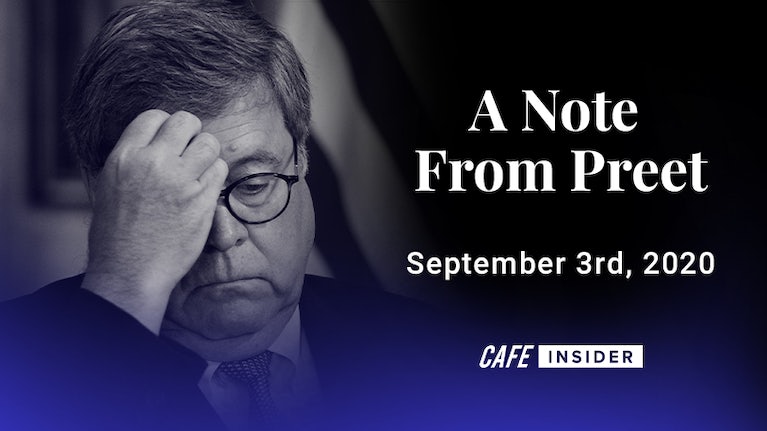 Note From Preet: Base Conclusions on Evidence, Not Its Aura