Note From Preet is part of the CAFE Insider newsletter. Read, listen, and let us know your thoughts at [email protected]

For four years, we have witnessed a degradation of public discourse, a coarsening of rhetoric fueled in large part by Donald Trump’s mouth and twitter feed. It has been a never-ending barrage of lies, insults, and trash talk. He mocks women’s looks, makes false accusations, calls people childish names, and as New Yorker writer Jelani Cobb reminds us on this week’s Stay Tuned, once cruelly mocked a disabled reporter.

Once in a blue moon, a Republican official may quietly (very quietly!) comment that this or that presidential tweet was not, how to put it. . . presidential. But mostly they ignore Trump’s tweets, laugh them off, advise not to take them either literally or seriously, and even sometimes look reporters in the eye and say, “Hey look, I don’t really read tweets.” Now, I don’t expect Republican senators or House members to go to the floor of their respective chambers and commit political suicide by harshly condemning Trump every time he crosses the line in a tweet. But the virtually universal silence is support. And it has served to normalize a wholesale debasement of discourse in America.

Members of Congress themselves have joined in the fun (on both sides). In the wild west of Twitter, they crack jokes, attack rivals, make all manner of tone-deaf comments, and sometimes engage in downright hostile back-and-forth with reporters or the opposition. Speaking of tone-deaf, remember the time Senator John Cornyn joked about coronavirus by tweeting a picture of a Corona beer with a wedge of lime? That was mid-March, when lockdowns were imminent and the NBA had just canceled its season.

Twitter is a strange place. People, myself included, are more careful and traditionally respectful elsewhere. I am more measured and temperate in this space, in my book, on CNN, and on my podcasts. Certainly we tend to be more gracious face-to-face, even with bitter adversaries. Most of us were raised that way.

I try to observe certain self-imposed rules when tweeting. No comments on anyone’s looks; honest efforts to engage the substance, even if sometimes snarky; avoid cursing. But I’ve had twitter tussles myself – with the likes of Don Bongino, Dana Loesch, Jonathan Turley, Richard Grenell, Representative Doug Collins, and even Anthony Scaramucci. None of these generated any light. That’s Twitter. One night, I was especially angry about the bad faith machinations of Representative Devin Nunes. My own dad texted me to calm down.

The throwaway ease of launching a smart aleck riposte on an unregulated social media site is sometimes irresistible. It’s easy, and it’s quick. There is no waiting period or edit button. Errant and regrettable tweets fly, and everyone does it. That includes not just the President these days, but also cabinet secretaries and former Obama advisers too. It also includes, as I’ve said, sitting U.S. senators.

But therein lies the rub (and the point of this week’s Note). There is apparently a new norm! Those same senators are declaring, with self-righteous indignation, that mean tweets about them are confirmation kryptonite.

Way back on July 10th, I made this prediction on the twitter hellsite:

“I look forward to the ironic moment when Republican Senators who laughed off the crudeness, cruelty, and toxicity of this President attack a Biden nominee for some intemperate tweets.”

As I commented this week, that tweet aged well. Upon the announcement that President-elect Biden planned to appoint Neera Tanden to head the Office of Management and Budget, Senator Cornyn’s communications director posted this tweet:

“Neera Tanden, who has an endless stream of disparaging comments about the Republican Senators’ whose votes she’ll need, stands zero chance of being confirmed.”

John Cornyn doubled-down on the sentiment, saying in an interview, “I think, in light of her combative and insulting comments about many members of the Senate, mainly on our side of the aisle, that it creates certainly a problematic path.”

I should disclose that Neera Tanden is a friend of mine. She is more than qualified for the job. She is a brilliant policy wonk. She served as then-Senator Hillary Clinton’s legislative director, later as an adviser to President Obama, and now leads the Center for American Progress. As you may have seen or read, she was raised by a single mom who was an Indian immigrant and who for a time had to rely on food stamps. Neera is a graduate of Yale Law School, and she embodies the American dream. There are plenty of policy and political differences one could invoke to oppose her confirmation. But mean tweets?

My reaction to this, presaged by my own July post, is best summed up in this comment:

“I will not take lectures on Neera Tanden’s tweets from people who said nothing about Donald Trump’s relentless bullying and name-calling, and neither should you.”

Walter Shaub, former Director of the Office of Government Ethics, had his own memorable response: 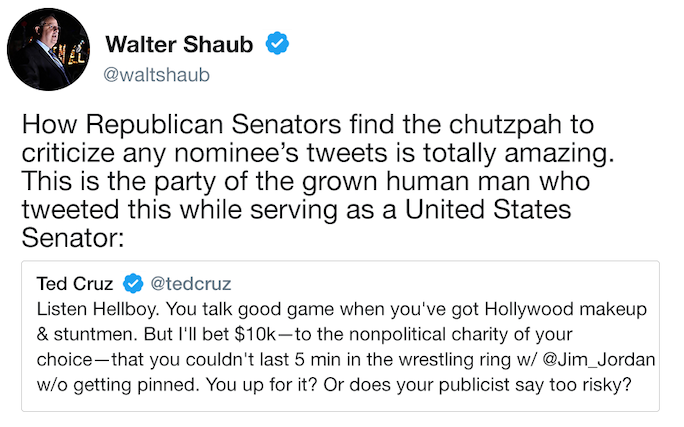 There are worse hypocrisies on the horizon, of course. Republican senators will now demand, after giving lightly-credentialed Trump nominees a pass, that Biden appointees be deeply qualified. They will now remember, for the first time in four years and now that Biden is about to take the helm, that budget austerity should be a priority. And so it goes.

But at this particular moment, the hypocrisy of Trump-enablers and apologists getting on their soapbox about someone’s tweeting habits is richer than Donald Trump claims he is. 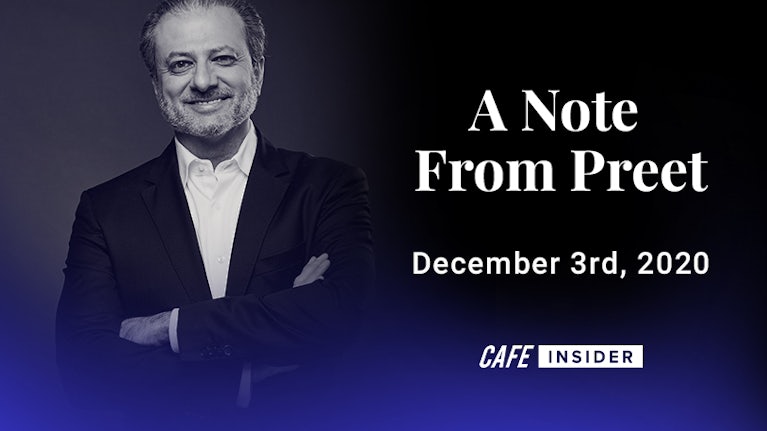