Greetings on this first full day of Joe Biden’s presidency. I confess I am writing in a hazy hangover of emotion, celebration, fireworks, and drink. I am tired but hopeful and happy. As on Election Day, the happiness I feel is not like the joy of a birth, but rather like the exultation at a life narrowly saved. Both feelings are welcome, but they are different. The latter leaves you on edge; the joy is mixed with relief and perhaps lingering stress about what could have been.

I think back to Barack Obama’s Inauguration twelve years ago. I was able to attend, in person, the festivities on that historic day – January 20, 2009. Because I not only worked in the Senate but for then-Chair of the Senate Rules Committee, Chuck Schumer, I was able to score – through that office and through other connections – tickets not only for me and my wife but also for my young kids and my parents.

It was a family affair on that frigid Tuesday morning, as we set out for the D.C. metro a little after 5 am. It was about 18 degrees, the kids bundled up looking like little Michelin men. Our seats were scattered among three locations, none of them great, but no one complained as we were about to see the swearing in of the first Black president in American history.

Unlike yesterday’s event, in 2009 there were throngs of cheering attendees arriving at the Capitol, everyone acting like their team had just won the Superbowl. Back then, the transition had been smooth and the results never in doubt, which gave rise to more than two months of building euphoria amongst Obama supporters, unburdened by violence or the threat of violence. Two days before, there was a joyous open air concert in front of the Lincoln Memorial, where I joined thousands to sing along to Bruce Springsteen and Bono. And later in the evening of January 20th, there would be official black-tie balls all over Washington, more than a dozen. My wife and I were lucky to be able to attend two of them. There was celebration after celebration. And in between, there were celebrations.

Though times were tough and a recession was upon us, we were riding on a wave of hope and hopeful rhetoric, carried to us convincingly by a charismatic young leader who bellowed, “Yes, we can!” and “Si se puede!” and whose iconic campaign posters literally blared that singular message: HOPE. The market was down, unemployment was up, but we had hope. It felt like we were witnessing the birth of something, something durable and strong, even permanent. Change was not only coming; change was here to stay. I was happy and hopeful.

I am happy and hopeful today also, but as I said, it’s different. And that difference is reflected in the contrast between the Obama and Biden inaugurations. The pandemic, to be sure, wrought necessary modifications. There was less pomp because of our circumstance. But arguably the greater shadow over the proceedings was the virus in our politics, the division and hatred culminating in an armed insurrection on the very same site just two weeks before.

Don’t get me wrong – as my Twitter feed will attest, I had moments of giddiness all day. There were plenty of showstopping moments during the inauguration and the nighttime concert. But the weight of recent events, the travesty of the past four years, the knowledge of national calamity averted by the removal of an unfit president, all took a toll.

The hope is real, but it comes now with a more profound understanding that change is never permanent. The hope is not muted or dulled, but tempered. And tested. Tested by the violence, the racism, the lying, and worst of all, by the acceptance of so much of it by so many leaders in our country. Our democracy was at a crossroads, and it could have gone the wrong way.

I’ve been thinking a lot about what this week’s Stay Tuned guest Evan Osnos wrote in his book about Joe Biden:

Biden said that the turmoil of 2020 had dismantled a myth deeply embedded in his consciousness. For years, he’d been telling a parable about the morning of Obama’s Inauguration: “I called my two sons and my daughter up, and I said, ‘Guys, don’t tell me things can’t change.’ ” Hunching forward in his seat, he told me that Trump had exposed the flaw in that parable. “I’m embarrassed to say, I thought you could defeat hate. You can’t. It only hides,” he said. “It crawls under the rocks, and, when given oxygen by any person in authority, it comes roaring back out.”

It comes roaring back out. We can never forget that.

Back to the Biden Inauguration: For a time, the ceremony called to mind “A Star Is Born,” but not because Lady Gaga was there. It was because 22-year-old poet Amanda Gorman wowed us with her words. Wrapped in a bold yellow coat, her head barely clearing the microphones, her voice was clear and her poetic prescription clear-eyed. The stanzas of “The Hill We Climb” soared surely, but did not elide (or hide) the rocky ground we must tread even as we look to the sky. The young laureate acknowledged the nation’s “terrifying hour” and the specter of “catastrophe.” Nevertheless, ours is “a country that is bruised but whole,” and which must assert: “How could catastrophe possibly prevail over us?” The listener notes that it is a hill we climb, not a mountain, and that we climbers are not Sisyphus; we can reach the hilltop and remain. It is hope, coupled with hard work, that gets us up that hill.

This is a hope both idealistic and pragmatic. It wants foresight as well as hindsight, a reckoning of catastrophes barely avoided and a vision of achievements that can yet be won. As Amanda Gorman told us: “One thing is certain: if we merge mercy with might and might with right, then love becomes our legacy and change our children’s birthright.” 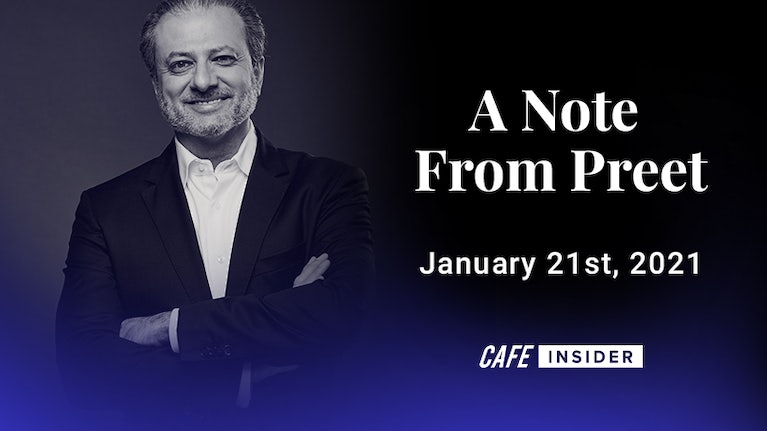 Note From Preet: Climbing the Hill