At the end of a criminal trial, as everyone knows, counsel for the parties stride to the lectern, look earnestly into the eyes of the twelve ordinary Americans pressed into service as jurors, and beseech them to acquit or convict, as the case may be. This is the lawyers’ opportunity to marshal the evidence or note the absence of it, as the case may be. This is their last chance to make the case for their side before the twelve retire to deliberate and vote. Cases are won and lost on the strength or weakness of this final phase of the trial: the closing argument.

Notwithstanding Donald Trump’s increasingly unhinged calls to lock up his rival, democratic elections are not criminal trials. Nonetheless, it’s striking how often pundits and press outlets lately refer to the final messages from Donald Trump and Joe Biden as their “closing arguments.” I suppose they are in a way, though in politics, unlike in a court of law, the advocates are bound by little more than their own sense of honor, decency, and instinct for persuasion.

Many people are remarking upon the incoherence and illogic of Trump’s closing argument. Is the argument, let’s make America great again? That doesn’t make much sense if you’ve been the president for four years. Let’s make America great again, again? Perhaps the argument is a mix of warnings about tax increases and socialism and Antifa and the behavior of Hunter Biden. I’m biased, of course, but none of it seems to be sticking. Part of the reason is that much of Trump’s message is muddled with grievance, hate-mongering, boorishness, and self-pity.

What Trump is missing most from his closing argument is an authentic message about love of country. Sure, he loves to say, “America First,” but he doesn’t get across that he cares about all Americans. Sure, he loves parades and fireworks and flags, but he doesn’t convey an understanding of the American values they represent. For all his love of pomp, Trump seems not to know the words to the Star-Spangled Banner, God Bless America, or even the Pledge of Allegiance.

Campaigning this week in Erie, Pennsylvania, Trump essentially told the audience he didn’t want to be there, wouldn’t have bothered but for his lagging in the race. It was a message of contempt; and it was the message of a loser.

What of Joe Biden’s closing argument? Recently I wrote about his suspension of negative ads while Trump was recovering from COVID-19. There was much consternation about this; Trump is bad and his badness must be summarized and piped into as many homes as possible. I, too, was relieved when Biden’s campaign lifted the embargo.

But in these final days, I don’t think it’s the negative reminders that will make the difference. Nor will it be particular positions on taxes, court-packing, fracking, and the like.

It will be communicating his authentic love of country. And love for all who live here.

Exhibit A is the relentlessly positive ad aired during the first game of the World Series. It stopped me, and many others, in their tracks. I’m sure you’ve seen it. It features sea-to-shining-sea American vistas, and the iconic voice of actor Sam Elliott, over the simple melody of our national anthem. There is no policy proposal or ten-point plan. It is just these words and they are beautiful:

But that is not the most moving video about Joe Biden that I saw this week; it’s one that is unscripted, unplanned, and gives you a glimpse of who Joe Biden is. Until this week, few had seen the clip. It shows Biden at an event in 2018 honoring Chris Hixon, the heroic athletic director at Marjory Stoneman Douglas High School who was killed trying to save students during the shooting in Parkland, Florida. Biden is seen somberly greeting Chris’s widow and then he turns away. Just then, a child calls out and runs after the former Vice President. The distraught child exclaims, “I’m his son!” and the two embrace. He is Chris Hixon’s boy, Corey, a special-needs child with Kabuki Syndrome. Biden holds him close and says, “Thank you for hugging me!” Then he asks, “Are you okay?”

As we approach a quarter-million dead from coronavirus and hurtle along with an empty-hearted man at the helm, Corey Hixon is a stand-in for all of us. Like Corey, the country is suffering. We have endured agonizing loss. We don’t know what comes next. And we are not okay. And when Joe Biden clutches that child tight, hugs him like his own flesh-and-blood, and says, with conviction, “We’re going to be okay, I promise,” our hearts, like Corey’s, hang on that hope. And on that promise. 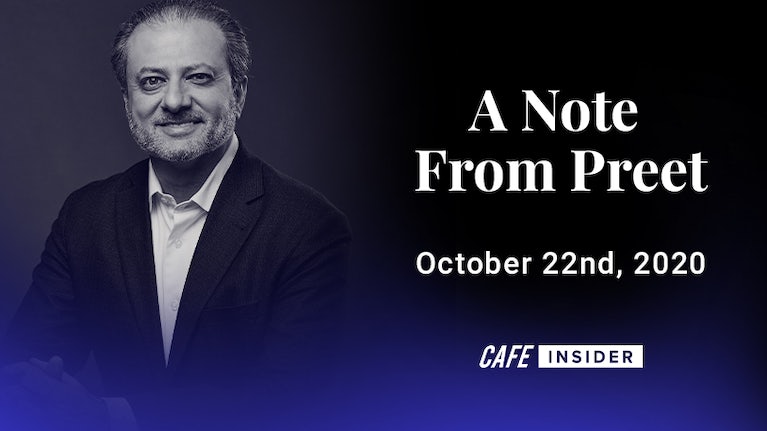 Note From Preet: Closing Arguments from Trump and Biden