Since my last note, we ushered in a new year; four amazing contributors joined CAFE; we announced the new Doing Justice podcast; and my son got into college. Also, as a nation, we went through some things. There was an insurrection at the Capitol, a second impeachment of President Trump, and 70,000 more Americans succumbed to COVID.

A lot has happened in a short time, much of it terrible and tragic. The insurrection has shaken us, but its aftermath suggests a ray of hope about the future of Trump and maybe even Trumpism.

I have openly worried that even after Trump leaves office, we would not be rid of him or his toxicity. Even in defeat, there was reason to fear his strength, continued influence, and future daily intrusions into our consciousness. Despite Trump’s defeat, supplicants like Josh Hawley and Ted Cruz sought Trump’s mantle (and voting base) by persisting in the election lie. Despite the defeat, party stalwarts stood with Trump.

Despite decisively losing the popular and electoral college votes, with his continuing corporate support and gargantuan social media followings, Trump remained the man to beat in 2024. In the interim, the credible speculation went, he could incubate and grow a massive media enterprise that would outpace Fox News.

Just a week ago, you could bet that Trump would remain powerful and prolific, continue to be a fixture in the news and in political discussions. He would stay relevant and strong and capable of a comeback.

But almost overnight, in the wake of the insurrection he incited, all that has changed. Somehow, Donald Trump managed to snatch oblivion from the jaws of defeat. And oblivion, of course, is what Trump fears most.

With the shocking loss of life and Trump’s role in encouraging the rioting, the world seems different, and since last week, he has lost and lost and lost again. Being a loser, of course, is the other thing Trump fears most.

He lost cabinet secretaries Elaine Chao and Betsy Devos. He lost Mick Mulvaney and Mitch McConnell, who reportedly said he will never speak to Trump again and is open to voting aye in the Senate impeachment trial. For obvious reasons, Trump lost his own VP, Michael Pence, whom rioters wanted to hang at the Capitol. And he lost a host of significant staff to boot. If you are not inclined to award gold stars to Trump enablers jumping ship at the last possible moment, you are in the right. I am not so inclined either. But, to the extent that every tardy act of defiance and rejection helps to marginalize Trump and render him a punchline, that is good for America.

Trump lost more than personnel and political allies. He’s lost 11 points in the polls, with his approval down to an anemic 33 percent, according to Quinnipiac.

He’s lost his megaphones. He lost Facebook, Twitter, and YouTube. Without 89 million Twitter followers to kvetch to, Trump has lost the power to regularly inflame and change the subject on cable news with 280 characters strung together in ungrammatical and incendiary fashion.

But that’s not all. He lost his financial institutions, both Deutsche Bank and Signature Bank. He also caused the majority of the House Republican caucus to lose donations from a growing number of corporations because of their support of the election lie.

And it’s even worse than that. Never mind that the first line of every Trump obituary will contain the phrase “twice-impeached,” what has reportedly vexed him most? That officials of the PGA championship canceled plans to let Trump’s Bedminster, N.J., golf club host the event in 2022.  As New York Times reporter Maggie Haberman tweeted, “He’s angry about impeachment, people who have spoken to him say. But the reaction to the PGA decision was different order of magnitude.”

Trump had just 14 days left, just a fortnight. Everything that has befallen him in the last week was his own doing. He wasn’t outsmarted by wily Democrats or undermined by disloyal lieutenants or cut down by the mainstream media. He was done in by his own pathetic narcissism and fundamental indecency.

He could have inspired his base and shown some departing grace; instead, he fomented a riot.

Donald Trump betrayed America, and in so doing, ruined his 2024 chances, increased his criminal exposure, and undercut his own future. For a Trump, he committed the ultimate act of self-destruction: he killed his brand. 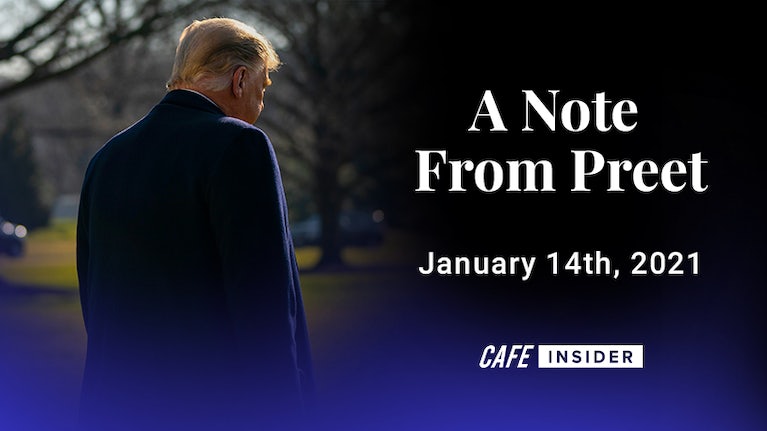 Note From Preet: From the Jaws of Defeat