Steve Bannon has been in the news a bit lately because of the federal criminal charges brought by prosecutors in my former office. Anne Milgram and I have discussed those public charges at some length, but the recent news calls to mind my personal encounters with the controversial figure.

I have met Steve Bannon twice.

The first time was on November 30, 2016. It was not long after the election and you may recall that President-elect Trump asked to meet with me to ask me to stay on as U.S. Attorney. When I arrived at Trump Tower, there was the usual phalanx of journalists in the lobby, penned in by a velvet rope. As I waited for the gold-plated elevator car to come, one reporter shouted, “Mr. Bharara, are you here to serve a subpoena?!” People laughed, as I ignored the question.

When I arrived at the 26th floor, I was informed that Trump was running late. I learned later that he was tardy because he was receiving a national security briefing. I was brought into the Trump office, where I expected to wait alone. Instead, I was kept company by two men. One was Jared Kushner. The other was Steve Bannon. Both men were cordial and made small talk. What I remember most was their ebullience at Trump’s victory. Once Trump appeared, both men faded into the background.

My second encounter with Bannon was more revelatory. It came almost three years later, in 2019, on a day that was fairly eventful. My day began with a Stay Tuned interview with acclaimed documentary filmmaker Errol Morris, who had just completed a new movie. About whom? None other than Steve Bannon. When I asked Morris why he had chosen Bannon as his subject, he said he found the man intriguing: “Political guy, bad guy, possibly crazy. I do respond to that because I too might possibly be crazy.”

Later that day, the U.S. House of Representatives voted formally to proceed with an impeachment inquiry. Every Republican voted no; all but two Democrats voted yes. A significant day in history. CNN scheduled me to offer analysis that evening, both on Wolf Blitzer’s early evening show and on Anderson Cooper’s.

Oh, also it was Halloween.

A bit before 8 pm, I wandered into the makeup room in Hudson Yards where CNN’s New York studios had recently moved. Anderson Cooper, seated in one of the chairs, saw me and motioned me over. He said in a low voice, by way of warning, “Preet, just FYI, Steve Bannon is in the green room.” I had at least 20 minutes to kill and nowhere else to go really. I also saw no reason to avoid Bannon, so I headed to the green room, where I saw him and one of his colleagues quietly chatting in the corner.

They greeted me and we shook hands. Bannon asked me what I was up to these days, and I said your ears must have been ringing this morning because I spent an hour discussing the new documentary about you. He smiled a big smile, obviously tickled. We exchanged some other pleasantries. All very cordial.

Then, perhaps because of the cordiality, I decided to put a question to him, in as good natured a way as I could. Because what the hell. I said, “Hey, Steve. Can I ask you a question? Because I can’t figure it out. Why does the President lie. So much. About everything. Constantly.”

I went on to give one of the stupidest examples of presidential mendacity that was on my mind a lot at the time. It was Trump’s claim that many parents of American soldiers killed in action in Korea would tearfully thank him for helping bring their remains back after so many decades. The average age of a parent of a soldier killed in action would have been about 114. Just a lie. And an unnecessary one.

And I repeated, in an earnest tone, “Why does he just lie all the time? Explain it to me.”

Bannon, again, took no offense. And he offered no defense. His response? “You mean like the time he said I begged for my job like a dog?” He responded to my question by offering an example of a presidential lie about himself. He otherwise had no answer. He just shrugged and commiserated.

Alone in a green room, with cameras at a safe distance, Bannon did not defend Trump as a truth-teller, did not vouch for him, did not argue for him. Minutes later, on live national television, he would boast about the “War Room” he was setting up for the sole purpose of militant defense of presidential conduct in the Ukraine affair. But here, pre-game, just between us, he essentially confessed that the truth about Trump is that he lies.

There’s one other thing I remember about our exchange. At some point, we turned to the substance of the revelations about Trump’s actions underlying the impeachment effort. I made some strident point about abuse of power. Bannon paused, almost bemused, and gave me a look that said, “Hey, it’s just us guys in the green room.” I persisted in my point. He said, surprised, “Oh wait, you actually believe that.” It was a statement, not a question. And with that statement, he made me understand something.

In his mind, we could be cordial and pleasant in the green room, because what we did on TV was something of an act. Privately, he could admit the president is a liar. Publicly, he defended him to the hilt. And somehow I think he assumed that other people were acting their parts too; that I was playing the role of presidential critic but actually knew better. People often think others are like them. They are wrong.

I’ve thought a lot about Bannon’s reaction that day: “Oh wait, you actually believe that.” It seemed quaint to him. I’ve thought also about all the other Trump defenders. Some of them are truly in the president’s thrall, no doubt. But others, not just Bannon, but also Lindsey Graham and Marco Rubio and Ted Cruz and Kellyanne Conway and Kayleigh McEnany, are all actors. Pre-Trump they all lambasted him, mocked him, denigrated him. They are playing sycophantic roles now for personal and political interest. They are worse than the true believers, because they know better. Or at least used to.

As for Steve Bannon, a jury may ultimately decide whether he is guilty of specific federal conspiracy crimes. But, to me, the record is already clear that he is a fraud. 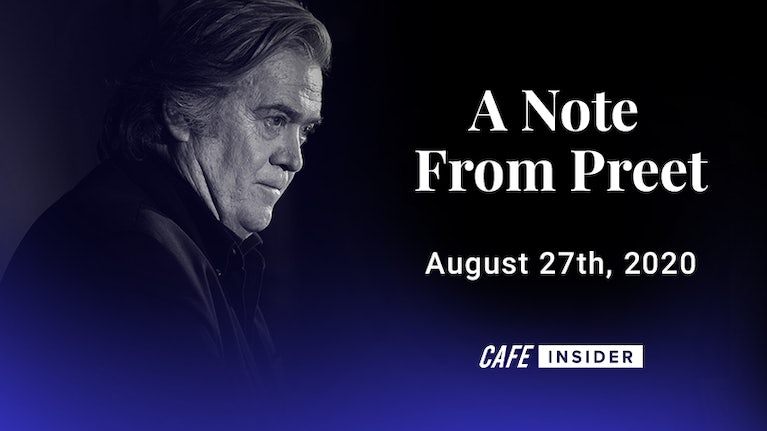 Note From Preet: I Have Met Steve Bannon Twice