A second Senate impeachment trial of Donald Trump is upon us, and, like last time, there are questions about procedure and precedent. The biggest difference, of course, is that Trump no longer holds office. To Republicans who I believe misread the Constitution, ignore at least two precedents, and may simply want to avoid a debate about the merits of the insurrection case, departure from the presidency precludes any trial in the Senate. This week every Senate Republican but five voted to dismiss the proceedings on this ground. The trial will nonetheless go on because the overall vote was 55-45 in favor.

The other consequence of Trump’s no longer being President bears on the identity of the presiding officer. In 2020, Chief Justice John Roberts presided, as the Constitution clearly states that in the case of a President being impeached, the Chief Justice must serve that function. But the Constitution says nothing about the head of our judicial branch presiding for the trial of a former President. Therefore, given that Roberts clearly wants nothing to do with round two, the longest-serving Democratic Senator, Patrick Leahy, will preside. This has spurred some confusion and criticism.

It is not the best look, but it is not as peculiar and worrisome as some may think. First, the presiding officer doesn’t do much. Do you recall Justice Roberts making any substantial or substantive ruling that affected the conduct of the first Senate trial? Neither do I, because he did not. The job is largely ceremonial and ministerial, and that’s perhaps one reason that Roberts is abstaining now that he has the choice.

But there is something else too. The oddity and seeming conflict of interest inherent in a Democrat presiding over the trial must be viewed through a particular lens: this is a political, not judicial, proceeding. In countless ways, putting aside the presiding officer, the Senate trial is rife with conflict, the least of which is the party registration of that officer.

I wrote about that dynamic in this space 15 months ago. With another Senate trial looming, it’s worth revisiting how different it is from a conventional courtroom trial:

“Each Senator. . . is a juror. Each has a constitutional duty to consider the evidence in this most somber proceeding that American democracy contemplates – the removal of a sitting president.

Given this rough analogue to a traditional criminal trial, analysts and Senate members themselves have sometimes adopted the language of that commonplace judicial process. Some Senators, when asked how they would vote, intone that they will not prejudge the case, that they are jurors in the normal sense and will withhold decision. That is all well and good, and it probably helps to honor and legitimize the process. But it’s a bit counterfactual.

We should be under no misimpression that a Senate trial on impeachment is anything like a criminal trial in state or federal court. It is fundamentally a political, not a judicial, process. Among other things, the usual rules of evidence need not apply; the usual protocols about questioning witnesses and making arguments also don’t apply. Further, there are no defined standards of proof, no beyond-a-reasonable-doubt requirement, no statutorily spelled-out elements of crimes that need to be met.

What of the model of Senators as “jurors”? I suppose they are, but a far cry from how you and I understand that duty and role. Senate “jurors” are nothing like the groups of 12 everyday civilians who sit in judgment in criminal cases across the country. Regular jurors are not permitted to know anything about the case; they may not read about the facts; they may not Google a thing; they may not harbor any kind of bias; they may not talk to the press, deliberate before the close of trial, or base decisions on anything other than the facts and law as delivered by the presiding judge. They are told to vote their conscience.

Consider how different that is from how the members of the U.S. Senate are situated. Senators are politicians. They have partisan views. They speak to the press. They are all – every one of them – on record as supporting or opposing the President, often vocally. Traditional jurors are not even permitted to know the defendant, much less be vocal cheerleaders on policy, politics, and the case itself.

In fact, in a traditional criminal trial, every single member of the Senate would be struck for cause, as we lawyers say, because of their bias for or against the defendant. If they weren’t, anyone convicted at trial in such a process would have a 100 percent bullet-proof appeal.

That, of course, is not how a Senate trial works. Senate “jurors” are free to speak their minds, spin the press, make declarations about the evidence, even as it is still coming in. Consider Senator Lindsey Graham, erstwhile impeachment manager in the 1998 trial of Bill Clinton, who has said the current impeachment process is a sham and that there is nothing he has seen that warrants it. And he’s the Judiciary Committee chairman.

Senate jurors are not impartial. They are politicians, with interests and agendas.”

Everything I wrote then is true now, except the apparent conflicts seem even worse. Every Senate juror is arguably a victim of the offense being adjudicated – after all, it was their chamber that was invaded and desecrated, allegedly at the urging of the former President. Imagine putting intended victims of crimes on traditional criminal juries; the defense bar would have a collective heart attack. This time around is more peculiar still: based on their perpetuation of the election lie, at least two Senators, Ted Cruz and Josh Hawley, have been cited as fellow inciters of insurrection. Imagine allowing potential co-conspirators to serve on traditional criminal juries. It would be prosecutors’ turn for collective heart failure.

But this is the procedure set down by the Founders: Constitutional, yes, because it is laid out in that founding document. But as it is a political struggle between two co-equal branches of government, part of our essential and elaborate system of checks and balances, traditional features of neutrality are impossible.

One other point I made last time was this:

“Senators are subject to political intimidation. . . They are potential victims of the substantial wrath of the President, on whom they are supposed to pronounce judgment. The President, through his weaponized Twitter account, has made his retaliatory instincts clear. . . This dynamic necessarily perverts and distorts the trial process following impeachment.”

But what is the role of intimidation this time? Out of office and stripped of Twitter, Trump is a shadow of his former self. Will that make a difference? Well, not if many Senators still fear payback or view Trump’s base as his proxy, as the procedural vote clearly signals.

Trump may be weakened, but apparently he’s not yet as weak as the Republican Senators who could hold him to account. 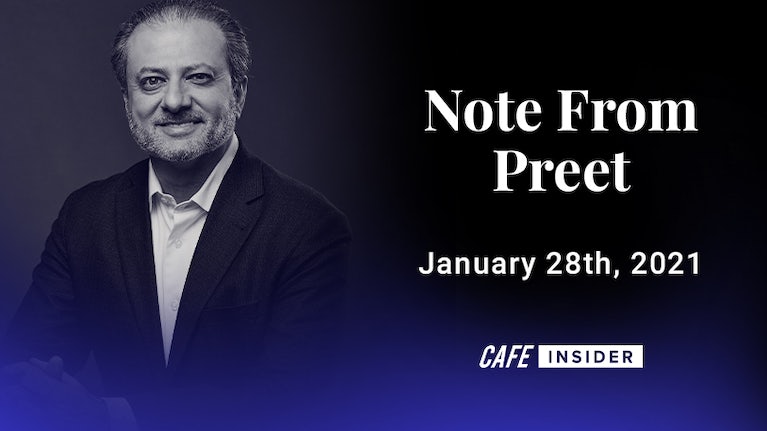 Note From Preet: Impeachment (Pt. 2) Is No Criminal Trial