CAFE Insiders can enjoy this recording of Preet reading his note, “Leadership in Crisis’” and read his note in the CAFE Insider Newsletter every Thursday.

A couple of further thoughts have been rattling around in my brain since my last note, where I gave some tongue-in-chief advice about leadership. For what it’s worth:

Leaders, like all people, have strengths and weaknesses. Some are better suited to certain challenges, less suited to others. There is the leader, for example, who can be a competent steward in times of stability and prosperity, but is easily overwhelmed by crisis. There is also the leader who is lackluster when things are going well, but shines in crisis. Voters distinguish these things, correctly or not. Winston Churchill, after all, was famously rejected by voters in peacetime after helping save the planet from fascism in wartime.

Consider what kind of leader appears to shine in a crisis. Often the qualities that attract praise in the most difficult times are ones that citizens otherwise might find off-putting. We may not appreciate the micro-managing, overbearing, bull-headed, autocratic control-freak in normal times. But in a full-blown crisis, especially an existential one, if the leader shrewdly manages public perception, people will cheer and they will follow. And if such a leader can temporarily suppress his natural narcissism in favor of conspicuous humility, the suffering populace may even swoon.

Let’s take three examples of leaders who I think have deep flaws, but who earned – rightly or not – high praise for the handling of major crises on their watch: Rudy Giuliani after 9/11; Chris Christie during Hurricane Sandy; and Andrew Cuomo during the Coronavirus pandemic.

Right off the bat, notice an experience these men share. Each was an aggressive head of a formidable prosecutor’s office: Giuliani, U.S. Attorney in SDNY; Christie, U.S. Attorney in New Jersey; Cuomo, Attorney General of New York. They know how to fight, and they also know how to make a case, legal or otherwise. (For purposes of this writing, assume we are talking about the prior Rudy Giuliani, who in my view has become an inexplicable and declining figure.)

All three also are well-known to have fiery tempers, strong wills, and epic egos. They are tart with their tongues, dismissive of dissent, and quick to retaliate against adversaries. They pick fights, and they play to win. They are all, in ways both different and similar, showmen. They love the stage and know how to use it. Each exudes an aura of self-righteous certitude in his positions, often bleeding into contempt for those who disagree. For these leaders, “It’s my way or the highway.”

Does any of that sound familiar? Do these descriptions remind you of anyone else? The Venn diagram for these three men and Donald Trump would be an interesting one. It is not a coincidence that two of them, Giuliani and Christie, have been close advisers to the President. Birds of a feather. Trump is a Showman, a bully, and the most extreme embodiment of a “my-way-or-the-highway” approach that we have seen in the White House. He prides himself on punching back; no target is beneath him.

And yet, notwithstanding this attitudinal overlap, there is a remarkable divergence between Trump and the other three men. The three men, at least during the height of the crises they handled, were showered with praise and dramatically improved their political standing. Trump has done the opposite.

In early May, Trump sat at a 49% approval rating. At the start of July, that number was down to 38%. In contrast, Rudy Giuliani’s approval rating went from 34% in early 2000 to 79% after his response to 9/11. Chris Christie’s approval rating went up 19% in the month after Hurricane Sandy. Governor Andrew Cuomo saw a 33% jump during the first month of the pandemic. As for how Trump fares against the doctor he is encouraging his staff to attack both openly and off the record? When it comes to handling the pandemic, 67% of Americans trust Dr. Fauci; 26% trust Trump.

There are myriad explanations for this divergence, including Trump’s lack of intelligence, expertise, rigor, focus, and concern. Also, he does not hire the best people. But there is something else, too. For all his focus on appearance and image and central-casting, Donald Trump not only doesn’t know how to handle a crisis, he also does not even know how to play the part of a leader confronting a crisis. He doesn’t even know how to pretend. He cannot and will not subjugate his narcissism for even a brief moment, though it would help the country and also his own popularity.

Three simple things he cannot bring himself to do, unlike the other three leaders mentioned above.

Take responsibility. Especially in crisis, leaders take responsibility. Boldly and explicitly. They take the fire aimed at others, accept blame for failures, weather incoming criticism with strength and equanimity. That is Leadership 101. That’s why during his COVID-19 briefings, Andrew Cuomo took a rhetorical page from Truman, at whose desk the buck stopped. Cuomo expressly accepted blame for the shutdown: “If someone is unhappy, somebody wants to blame someone, people complain about someone, blame me.”

President Trump, not so much. When asked in March whether he would accept responsibility for the failure in testing, he seemed downright puzzled by the question. He said, “I don’t take responsibility at all.”

Show empathy. Rudy Giuliani is not known for warmth and empathy; he did not hold regular town halls as Mayor and look into constituents’ eyes and say, à la Bill Clinton, “I feel your pain.” But on 9/11 he did. And we knew he felt our pain. It’s hard to forget what Giuliani said when asked about the expected loss of life. With anguish in his voice and on his face, he said, “The number of casualties will be more than any of us can bear, ultimately.”

President Trump? There is no evidence he has shed a tear for a single soul, though more than 135,000 Americans are now dead from the virus. When asked the most softball questions about what message he has for people suffering, he can muster nothing but self-congratulation and anger at the questioner.

Cooperate. Crises of the sort we are discussing are by their nature non-political. The terrorist attack, the hurricane, and the pandemic did not kill Democrats or Republicans. They killed Americans. Good crisis leaders – at least those who understand how to play the part – conspicuously avoid politics and show collaborative effort even with leaders in the opposing party. And so, as the Republican Governor of New Jersey, Christie praised President Obama after Hurricane Sandy: “The president has kept every promise that he made.” He even famously hugged the President, to the horror of some in Christie’s party.

Trump, on the other hand, has injected politics into every aspect of the pandemic and its response. He demonizes Democratic governors, while praising Republicans. He has even politicized the wearing of masks. He has done little to show the response should be above politics. It may be too much to expect Trump to literally hug those in the other party (especially because of Coronavirus), but the cold shoulder is not presidential leadership.

To be clear, I am not praising the three mentioned leaders in all aspects of their crisis response. Given the disproportionate rate of death in New York, especially at nursing homes, Governor Cuomo in particular will likely face a sharp reckoning about his decisions. But the contrast in basic leadership skills with Trump is striking.

Before the pandemic, I thought Trump was unfit. But it takes a uniquely unfit leader to be terrible in peace and prosperity and even more terrible in crisis. 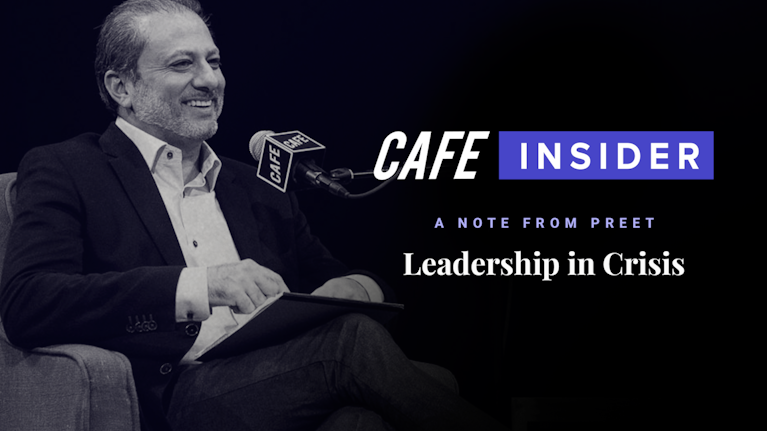 Note from Preet: Leadership in Crisis