This week i thought I would repost my Note from July 23rd, where I made some predictions about the first presidential debate. I didn’t do too badly. I was right that expectations had been (inexplicably) so lowered for Biden that he was well positioned to exceed them. He did. I was wrong that Trump would avoid a catastrophic showing. He didn’t, not because of what he said but because of how he behaved. What do you think?

With the first of the general election presidential debates still more than two months away, is it too soon to talk about them? Perhaps. But I’ve been thinking about those upcoming clashes in recent days and listening to friends ponder how they will play out.

Illuminating or not, presidential debates have been a part of my political education since I was a teenager. With one exception, I believe I’ve watched every single one since Reagan’s shaky first performance against Walter Mondale, which caused people to wonder about the incumbent’s mental acuity. In the follow-up, when asked whether his age should be an issue, the 73-year-old Reagan famously deflected those concerns with a perfectly-delivered one-liner: “I will not make age an issue of this campaign. I am not going to exploit, for political purposes, my opponent’s youth and inexperience.” Everyone laughed, and Reagan won in a landslide.

Both contenders this year are older than Reagan was in 1984. The question of mental acuity is back on the table in large part because, oddly, Trump has put it there. He has placed a large bet that his own cognitive ability compares favorably to Joe Biden’s. I’ll come back to this in a moment.

Let’s assess the debating strengths of Donald Trump. Some of these strengths are quite formidable, frankly. They don’t, however, have anything to do with eloquence, preparation, intelligence, or rhetorical skill. Rather, as I see it, Trump has two debating assets that inoculate him to some degree against a failed performance.

First, notwithstanding Trump’s braggadocio about his abilities, five years of slurring (both words and people), misstatements of fact, and bald-faced lies have essentially rendered him immune from a catastrophic performance, at least in the estimation of his base. Given the likely huge audience, a debilitating gaffe is what campaigns fear the most. Remember when Mitt Romney was asked about pay equity for women in the second debate of 2012? He responded with a defense of gender diversity in his hiring, saying he had received “whole binders full of women.” For that, he was ridiculed and criticized for his insensitivity to women until Election Day. How quaint.

Trump got elected after release of the Access Hollywood tape wherein he basically confessed to sexual assault, after mocking the looks of a female candidate, mocking the looks of the wife of another candidate, and after being credibly accused of sexual misconduct by over a dozen women. On top of that, Trump has been caught in thousands of lies and has made blatantly racist statements. Again, at least with respect to his base, none of it matters.

Back in September of 2016, well before Trump even took office, Politico published an article entitled, “The 37 Fatal Gaffes that Didn’t Kill Donald Trump.” Ronald Reagan wasn’t the teflon president; Donald Trump is.

What on earth could Trump possibly say in a debate with Joe Biden that is more controversial or deal-breaking than countless things he has already said?

Second, Trump is remarkably difficult to debate because he is so very difficult to pin down. He is all over the place, dodging, lying, changing the subject, counter-attacking. He refutes a questioner’s documented facts with an easy, “That’s not what I’ve been told.” The combination of bluster and bullying saves him from an obvious knockout punch. Trump is near impossible to put back on his heels. He is never dumbstruck. He always has a sharp retort, whether it is truthful or not, whether it is logical or not. The point is he always has a return punch. I believe sensible people see that this man is the most ignorant and ill-prepared president of all time, but in the televised debate arena, it is hard to see how anyone lands a blow that will shake the faith of his faithful.

At this point in Donald Trump’s tenure, we expect very little from him other than nasty narcissism. No one is expecting a newly presidential, rigorous, fair, fact-based performance from the incumbent. Expectations are incredibly low, because Trump’s own conduct has put them there. That’s actually a strategically good position to be in. Hurdles are easy to clear if they are one inch high on the track.

But what are the expectations for his opponent, Joe Biden? Biden has historically been a substantively strong debater. He’s had a lot of practice, in the Senate and in his many runs for national office. Don’t forget that in 2012 he was widely praised for dispatching the much younger, self-described policy wonk, Paul Ryan, in their sole debate. Some people believe Biden is not as sharp as he was eight years ago. Whether or not that’s true, I have not understood why Trump and his supporters keep pushing this narrative before the debates. The principal effect of that approach is to lower the bar for Biden to Trump-like levels.

Let’s go back to cognitive acuity. Trump has been bizarrely bragging about his mental capabilities. He has boasted of “acing” a cognitive test that is meant not to measure intelligence, but screen for dementia. The test calls for, among other things, identifying a picture of an elephant and counting back from 100 by sevens. Yesterday, Trump said that doctors administering the test marveled that he could remember five words in a row: “person, woman, man, camera, TV.” As he boasted, “I’m cognitively there.”

Having cleared this preposterously low bar for the most powerful position on earth, Trump and his allies are simultaneously claiming that Joe Biden is NOT cognitively there. Over and over again, Trump attacks Biden’s mental acuity, language skills, and sharpness. The campaign is even running ads on it. A slew of Facebook spots sport titles such as “Joe Biden is clearly diminished” and “Do you think Joe Biden has the mental fortitude to be president?” Notwithstanding Trump’s own gaffes and misspeaking, the campaign hammers away at any Biden stumble. It comes across as a form of projection, rather than a smart political strategy, at least before the first debate.

Mostly what it has done is lowered expectations for the challenger. What does this mean for the debates? Speaking to NBC News recently, Mark McKinnon, President George W. Bush’s chief media adviser in 2004, said this: “If Trump keeps beating the cognitive drum and Biden shows up and completes sentences at the debate, it’s game over.” I tend to agree. 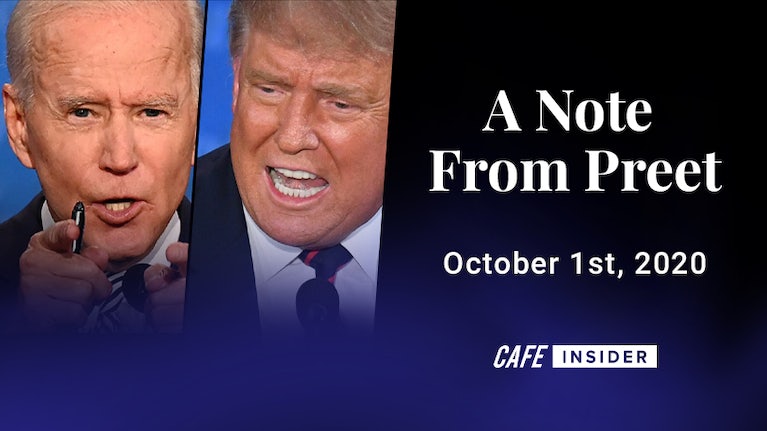 Note From Preet: My July 23 Predictions