Today is March 11th. It is hard this morning to think about anything other than the anniversary this day marks. A year ago today, the World Health Organization declared COVID-19 a global pandemic. Broadway shuttered. The NBA canceled its season. Oddly shocking, also, was the news that Tom Hanks and his wife had tested positive. As if we expected some sort of celebrity immunity to protect America’s best-liked stars.

It was a blizzard of bewildering headlines coming after days of portents of looming disaster — schools suddenly closed, colleges chose to empty, and rising death tolls in Europe foretold our own fate.

At that point there were only a couple dozen U.S. deaths from the pandemic. A few thousand deaths seemed possible, but half a million unthinkable. We did not yet know how bad the toll would be in terms of either death or disruption, just that it would be high. What we did know is that we would need aggressive, clear-eyed, and honest leadership to guide the nation through crisis.

From the start, Trump was focused on minimizing the coming crisis and exaggerating his own response. Consider some of the statements he made:

And of course, Trump would soon say, “Yeah, no, I don’t take responsibility at all.”

When elected officials questioned the efficacy of Trump’s response, he called Democratic criticism “their new hoax.” For Trump, any challenge or accusation was a hoax and every crisis overblown.

It was against that backdrop that our town’s entire public school system, on Sunday March 8th, abruptly decided to shut down, indefinitely, because one person had tested positive for COVID-19.

Our family dinner felt heavy. Just like that, school was closed. Concerns were multiplying. After dinner, I went downstairs to do some work, I don’t even remember what. Probably preparing for that week’s podcast interview.

But I could not get any work done. I opened up Twitter and posted what I was thinking at that moment: “Donald Trump is the greatest hoax ever perpetrated on America.” Then I posted again. And again. And again. For the next 33 minutes, I vented like I had never done before (and never have since). Anger and anxiety boiled over. This is the entire thread:

Donald Trump is the greatest hoax ever perpetrated on America.

He is a cheat.

He is a bad businessman.

He has no principles.

He doesn’t give a shit about anyone.

He is profoundly disloyal.

He projects his every flaw on others.

He doesn’t get math.

He doesn’t even understand weather.

He wanted to buy Greenland.

He wanted to nuke hurricanes.

He says he’s a genius.

But he won’t release his grades or tax returns.

He attacks war heroes while he pardons war criminals.

He accuses others of nepotism while he privileges his own children.

He whines about criticism as he spews nothing but bile.

He calls patriots “human scum” while surrounding himself with scumbags like Roger Stone.

He claims to be alpha while he endlessly whines like [a] stuck pig.

He says he’s for America though he cozies up to despots.

He said no one has more respect for women than he does.

He said he knows more than the generals.

He suggested he has a special talent for infectious diseases.

I am angry and worried right now. As are tens of millions of Americans. I don’t know what will happen next but what I do know is this:

Donald Trump is the greatest hoax ever perpetrated on America.

I don’t know if I felt any better after all those tweets. There was just too much to worry about.

Leadership matters, and a ghastly failure of leadership on the pandemic is the principal reason Americans decisively fired the last one. What a difference 50 days makes. The pace of vaccinations is accelerating every week. It’s exhilarating to see.

But we still have a ways to go. As I write this, I am texting with a friend and former colleague who has been in the hospital for four days with COVID-19. Fortunately, she is doing better and should be home soon. We are not out of the woods, but we can see a clear path.

My thoughts often go back to the wave of relief and thanks I felt after receiving my first vaccination shot 11 days ago. Because of a tiny risk of allergic reaction, once you get your jab, in whatever venue, you are required to remain there for 15 minutes before you can get home, in case you need an EpiPen.

That 15-minute period, of course, serves to protect you in case of an adverse reaction. But there is another incidental effect I think, which is this:

Once you’re jabbed, you can’t rush off to find your car or hail a cab or run home. You can’t immediately switch environments, can’t quickly leave the moment behind. You have to sit for a bit, fresh bandage on your arm. Your feelings of gratitude and relief live a bit longer. If you have faith, maybe you pray. If you’ve felt loss, maybe you think about that. Religious or not, you give thanks. You may cry. If you have a smartphone, you may send excited texts to loved ones, which is great too. I found it to be a bit of a gift, this compelled lingering. The shot itself is too quick, efficient, and painless to mark adequately what that moment means, not just for you but for everyone. It’s a thing worth dwelling on, maybe even longer than 15 minutes. 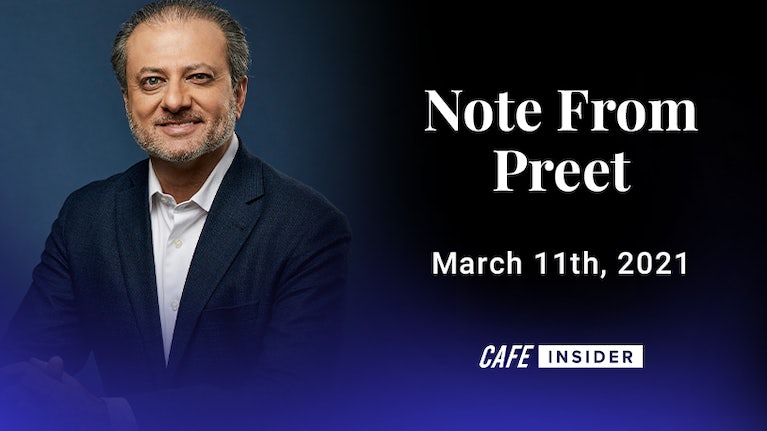 Note From Preet: One Year