The nation is engulfed in crisis. A massive and urgent response is needed. The people are on edge, fearful. All this as election day draws near, and a presidential debate looms. Is it a time for politics as usual or something different?

That was the question facing John McCain 12 years ago when he was the GOP candidate for president. America was on the brink of financial meltdown. Alan Greenspan called the crisis a “once-in-a-century type of event.” Black Monday came on September 15, 2008, when both Merrill Lynch and Lehman Brothers collapsed. Four days later, President Bush’s treasury secretary announced a $700 billion bailout plan. Over the course of a week, candidate Obama’s polling numbers began to tick up, as McCain slipped.

McCain decided to make a dramatic move. On September 24th, he announced, “Tomorrow morning, I will suspend my campaign and return to Washington after speaking at the Clinton Global Initiative. I have spoken to Senator Obama and informed him of my decision and have asked him to join me.” McCain pulled down his campaign ads and suspended fundraising.

He canceled an appearance on The Late Show with David Letterman, but kept to his interview with Katie Couric. He suggested he wouldn’t participate in the upcoming presidential debate, scheduled for two days later. He somberly said, “With so much on the line, for America and the world, the debate that matters most right now is taking place in the United States Capitol.”

The maverick move was intended to show that McCain was above debauched politics, above the polarized fray. But of course it was, at base, a political gambit. And it failed because it was seen as such. Within two days, the Arizona Senator changed course again, quietly resumed his campaign, and participated in the scheduled debate.

Fast forward to the present. Again we are a nation in crisis, struggling to contain a once-in-a-century pandemic that has already claimed more than 200,000 lives. And in the midst of an unchecked virus and early voting, President Trump himself contracts COVID-19, is airlifted to Walter Reed, and treated with experimental therapies.

What should Joe Biden do? Is it a time to be above politics? Should he suspend his own campaign in a show of grace towards an “honorable” adversary? Some in the Trump campaign called for that. Or should he continue as before, maybe even step it up a little?

Joe Biden chose a middle course – suspending only all negative campaign ads while the President was hospitalized. Some Trump critics were not keen on this unilateral disarmament.

The Lincoln Project posted this:

Biden should put his negative ads back up. This is outrageous. He deserves no courtesy.

Vox journalist Aaron Rupar had this to say:

As Biden pauses negative advertising while Trump is hospitalized, a reminder that Trump not only didn’t do the same when Hillary Clinton had a bout of pneumonia in 2016, but actually cut ads attacking Clinton’s health

I don’t blame them. I had mixed feelings myself.

For one thing, Biden has run some knockout positive spots, but insofar as this election is a referendum on Trump’s fitness for office, the negative ones make powerful arguments, often using Trump’s own words against him.

Then there is always this thought experiment: what would Trump do if the shoe were on the other foot? Imagine “sleepy” Joe Biden contracted COVID-19 and was in the hospital. Is there any universe in which Trump would suspend negative ads? No. On the contrary, the Trump we have come to know would have weaponized Biden’s illness against him (see, e.g., the Clinton parallel, above). He would have called the Democrat weak and unfit. He would have told him to drop out of the race. He would have said such an infirm man couldn’t protect the nation from a virus that he himself contracted. Suspend negative ads? It’s not hard to see Trump demanding the creation of new negative ads to take advantage of Biden’s illness. Even in the wake of Biden’s decision, Trump’s campaign declined to do the same – running their usual raft of negative ads while Trump was receiving steroids and supplemental oxygen in the hospital.

So why did Biden do it? Sure, as with the McCain move, there is the whiff of political gambit, though in this case it was smarter politics. But more importantly, it is a reflection of who Joe Biden is – a decent man with grace and perspective who doesn’t change himself in the heat of battle, who doesn’t cave to calls to pile on, who does what he feels is right. I’m happy that he is who he is and that he is my candidate.

In any event, with a maskless Trump preening before cameras in the White House and subjecting aides to the virus in the Oval Office when he is almost certainly still contagious, the Biden campaign has resumed airing the negative spots.

And I’m happy about that too. 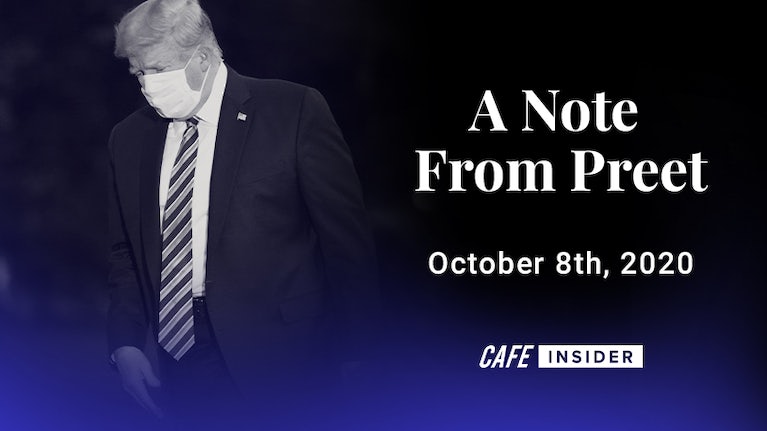 Note From Preet: Politics as Usual or Something Different?