Does it feel a little like Thanksgiving? Note the date – April 15th. It’s Tax Day. Actually it’s not, because the federal government gave us a stay until May 15th this year. Death and taxes may be certain but the dates those debts come due are not. Reprieves on either score are a reason for thanks. So that’s the kind of mood I’m.

On the occasion of the 100th episode of Stay Tuned, back in 2019, I used this space to take stock of how far CAFE had come and to give thanks:

“I love my weekly conversations, both with Anne Milgram and also with the multitude of guests. I have been alternately moved, educated, and inspired over the scores of interviews I’ve had the privilege to conduct. Often in these discussions, I am learning along with you, discovering new information at the same time you are. I am simultaneously learning about the guest, the topic, and sometimes also about myself.

I have very often been inspired, more than I expected to be. By the modesty of Robert Caro, the intelligence of Garry Kasparov, the wit of Nina Totenberg, the passion of Shannon Watts, the fiery eloquence of Steve Schmidt. I will never forget Bill Browder’s telling of the death of his lawyer, Sergei Magnitsky. Or Bryan Stevenson’s stories of redemption. Or Ken Feinberg explaining how he tried to justly compensate 9/11 victims. Or Senator Doug Jones describing how he got belated justice for four little black girls murdered in the 1963 church bombing in Birmingham. Or how Steve Martin, having witnessed executions in Texas as a corrections officer, abandoned forever his support of the death penalty.”

Twenty months later, I feel doubly grateful to have been able to share reactions and analysis of all the ways the country has been buffeted since. Since I wrote those words, there was an impeachment. Then a pandemic. Then nationwide protests following the killing of George Floyd. Then an election. Then an attempt to overturn it. Then an insurrection. Then another impeachment. And now, as I write this, a murder trial of the officer who killed Floyd. We tried to address racism, ignorance, and meritocracy. We tried to explain the law, democracy, and policy. Maybe my favorite category of guest is the Thoughtful Historian. An hour with the likes of Heather Cox Richardson or Isabel Wilkerson or Eddie Glaude is transporting.

Adam Grant returned as a Stay Tuned guest and made me play the role of an anti-vaxxer to explain techniques of persuasion. Eric Lander taught us about gene editing. Andy Slavitt twice helped us process the pandemic. Mike Birbiglia showed us the need to laugh, even in bad times. Yes, we still found a way to laugh, about a durian fruit scare, about whether Gray’s Papaya is a hot dog “restaurant,” about Anne’s fondness for penguins, and so much more.

We produced new podcasts – one on cyber and one on national security. Elie Honig educates us with Third Degree. I got to bring my book to life with Doing Justice. And we brought on four wonderful contributors just this year – Joyce Vance, Barb McQuade, Melissa Murray, and Asha Rangappa.

What is the point of this recitation? It is to catalogue all the kinds of content we have been pleased to produce and that we want to make more of. I have an extraordinary team and we have done a lot and our ambitions have only grown. We want to reach more people and make more content. We’ve gotten a lot of questions about the future of CAFE, in light of the acquisition by Vox Media. I’m happy to reassure you that CAFE will not change, but it will grow. Vox Media is a cutting-edge company that honors our editorial vision and wants us to make more of the same, while branching out beyond law to history and leadership and other areas. Expect exciting announcements to come.

We look forward to more illuminating discussions, more contributors, more podcasts, and something that I have truly missed, more live shows, in the flesh, before too long. Happy not-tax day to all of you. 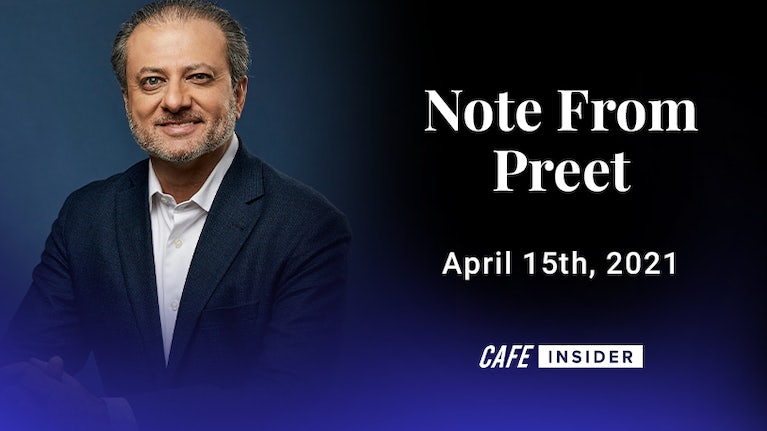 Note From Preet: Reflections on CAFE