Note From Preet is part of the CAFE Insider newsletter. Read, listen, and let us know your thoughts at [email protected]

Two years ago to the day, Anne and I taped our first CAFE Insider podcast. As I said on this week’s program, it feels simultaneously like just a few minutes and quite a few years. It still feels new, but also deeply comfortable. Every week is different, but also familiar.

In last year’s Thanksgiving message, I wrote this:

Thank you for listening, for reading, for caring. Anne and I began this little weekly podcast almost exactly a year ago, wondering whether there was any kind of appetite for another hour of sometimes wonky conversation about the things she and I care so much about – democracy, justice, the rule of law. Twelve months later, I am not only impressed but also touched by the community that has grown up here. There are now many, many thousands of you. You not only listen, but you write and comment and ask questions. That interest and thoughtfulness is one of my principal sources of hope about America.

Even more than in year one, these past 12 months you have shared your stories and struggles, your plans and pet peeves. You’ve suggested books and articles and shows. You’ve told us your COVID coping tactics and about loved ones lost. When my father-in-law passed away in March, I wrote about it here, and your condolences were a salve for our family’s grief.

You have welcomed the considerable content we have added to the Insider subscription – from the Cyber Space podcast with John Carlin to the United Security podcast with Lisa Monaco and Ken Wainstein to the audio versions of Elie Honig’s weekly note and mine. And we have more contributors and content coming early in the new year.

You also do something else for us. Anne and I have a fastidious team that preps us each week, and we strive to be meticulous. We read original source material, not just summaries. We try to read those who disagree with us, not just writers who echo our own thinking. One reason we started the Insider podcast was to correct errors and misimpressions by others in the media. But we are fallible; we make mistakes. And so when that happens, you serve as editors and fact-checkers too. Which I love.

There was that time I misspoke in saying Senator Martha McSally came to her position after a special election. You kindly corrected me:

Preet, a minor correction…McSally in AZ was appointed…It wasn’t a special election. She was not elected.

Then there was the time you corrected me for saying that U.S. Navy Captain Brett Crozier — who was stripped of his command in April after blowing the whistle on a COVID outbreak aboard his ship — commanded a “Navy Destroyer.” The very next morning, we had an email with this firm correction: “It was a Navy Aircraft Carrier and not a Destroyer.”

More recently, I persisted in a false memory I have had for 20 years. When Anne and I were discussing Trump’s attempts to litigate election results in multiple states, I noted that prominent Republican election lawyer Ben Ginsberg was taking Biden’s side in this race. I noted also the lack of Republican legal defenders on the Sunday talk shows, invoking the phrase “the full Ginsberg,” which I said was a reference to that lawyer’s appearing on every single Sunday show during the Bush v. Gore recount battle. As multiple Insider fact-checkers wrote in, I was wrong:

Preet: Love the show, but even you can make a mistake. The first full Ginsberg was performed by William Ginsberg, Monica Lewinsky’s lawyer (now deceased) not by GOP election lawyer, Ben Ginsberg. Otherwise you’re nearly perfect and Anne is, of course, extraordinary. Thanks.

Another listener joked that the “full Ginsburg” also did not refer to Ruth Bader Ginsburg. That, at least, I did know.

It may seem like a small thing, these little good-natured corrections. But it’s not small at all. In an age of lies and distortions, in an era marked by contempt for truth and facts, it is the highest compliment to be regarded as someone who cares about such details, such that attentive listeners will take time to lob emails at a generic corporate account to nudge me more towards accuracy. It is, also, a statement of your values. Keep the emails coming. Please know that I read them, and I am more grateful than you know. Happy Thanksgiving. 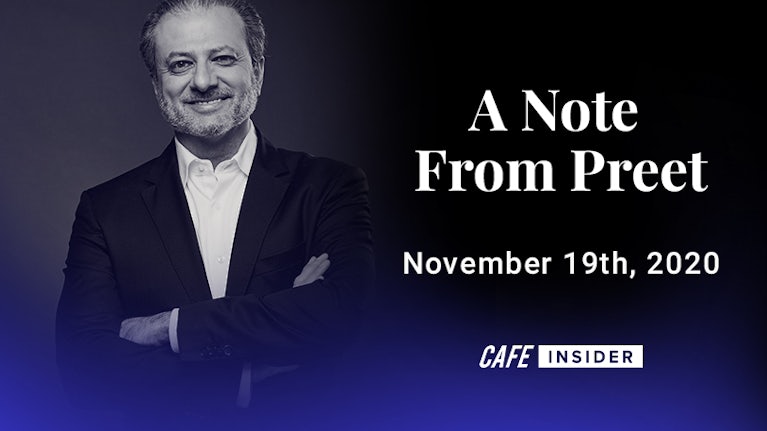 Note From Preet: Thankful to Fact-Checkers