Please enjoy this recording of Preet reading his note, “The Absurd Analogy Championship” and read his note in the CAFE Insider Newsletter every Thursday.

For those of you who read this Note on a regular basis, I wonder what you would compare it to. Is it like a warm bath? Is it like a refreshing but non-alcoholic cocktail? Is it like a diamond made of cubic zirconia? Maybe it’s a habit like taking out the weekly trash? Hopefully, it’s none of those things. It’s just a few paragraphs of my observations, and no bad analogy is necessary to describe it.

Given some head-scratching remarks in the public square recently, I’ve been thinking about bad analogies. Last weekend I tweeted, “Some people should be required to take a remedial course in analogies.” A number of the replies made me laugh out loud, like this one: “Analogies are just like the flu.” Another remarked that “[t]he whole world fell apart when they took analogies off the SAT.”

Perhaps you remember those hilarious compilations of terrible analogies culled, supposedly, from actual high school papers. These are some that are funny and harmless:

·  “Her eyes were like two brown circles with black dots in the center.”

·  “She grew on him like she was a colony of E. coli and he was room-temperature Canadian beef.”

·  “John and Mary had never met. They were like two hummingbirds who had also never met.”

A common definition of an analogy is a thing that is generally comparable to something else in significant respects. When well done, it helps you understand something because of a relevant commonality with some other thing that is more familiar. With that definition in mind, consider what some people have been using as benchmark comparisons for various features of the pandemic and the country’s response. They are neither funny nor harmless.

We can begin with the most basic false and dangerous comparison pushed by President Trump just weeks ago: The coronavirus is the flu; it’s the flu. That falsity was designed to put people at ease, but 47,000 deaths later it arguably played some role in making people complacent.

More recently, as some have grown weary of the indefinite stay-at-home orders, we’ve been treated to more outlandish comparisons. One protestor tweeted, “Prolonged lockdown is basically slavery.” These enslavement metaphors also are partly owing to Trump’s own rhetoric – as when he tweeted that people in Minnesota, Michigan, and Virginia should “liberate” themselves. From what? From the lockdown guidelines that his own administration has put forward?

That nonsense no doubt helped to spawn absurd comparisons between those opposed to pandemic restrictions and genuine liberators and civil rights heroes. The most offensive came not from some random protestor, but from an actual Trump economic adviser, Stephen Moore: “I call these people the modern-day Rosa Parks – they are protesting against injustice and a loss of liberties.” That’s more clueless and dumb than the E. coli analogy, above. It’s also offensive and ahistorical. Not to be outdone, another Trump supporter with a giant platform, Laura Ingraham, got into the dumb analogy game too, tweeting, “How many of those who urged our govt to help liberate the Iraqis, Syrians, Kurds, Afghanis, etc., are as committed now to liberating Virginia, Minnesota, California, etc?” What? Like them or not, these policies are designed to save, not subjugate. And people who actually have a public platform and the president’s ear should know better.

Then of course there are the people masquerading as doctors, doing their part to infect sound public thinking with baseless comparisons. Dr. Phil [McGraw], who does not have a medical degree and is not even a licensed psychologist, opined on Fox News as follows: “The fact of the matter is we have people dying, 45,000 people a year die from automobile accidents, 480,000 from cigarettes, 360,000 a year from swimming pools, but we don’t shut down the country for that.” Leaving aside that his swimming pool statistic was off by at least a factor of 100, Dr. Phil forgot what makes an analogy work – the thing has to be comparable in a significant and relevant respect. Last time anyone checked, auto accidents and drownings were not contagious, and not subject to exponential growth without a vaccine or lockdown. The TV “doctor” later apologized but the damage was done.

Are there apt analogies? One meme going around on social media observes: “The curve is flattening; we can start lifting restrictions now” is like saying “The parachute has slowed our descent; we can take it off now.” I kind of like it, but of course the pandemic is very different from a skyfall and the rate of descent and the time of impact is eminently more calculable than the leveling off of the virus.

Someone else put it this way: “I keep using the analogy of a marathon. Anyone who has ever run one knows well that if you start moving too fast at mile six because you ‘feel good’ you will pay for it dearly and implode later. Patience and pacing. More than anything, that’s where we’ve got to be.” This is a good point also.

But maybe there are no perfectly apt analogies. I don’t know. What I do know is that people like Stephen Moore who traffic in absurd comparisons to Rosa Parks ought to knock it off; they ought to knock it off like a pair of hoodlums knocking off a corner drugstore to hoard rolls of toilet paper in the middle of a pandemic. Or something like that. 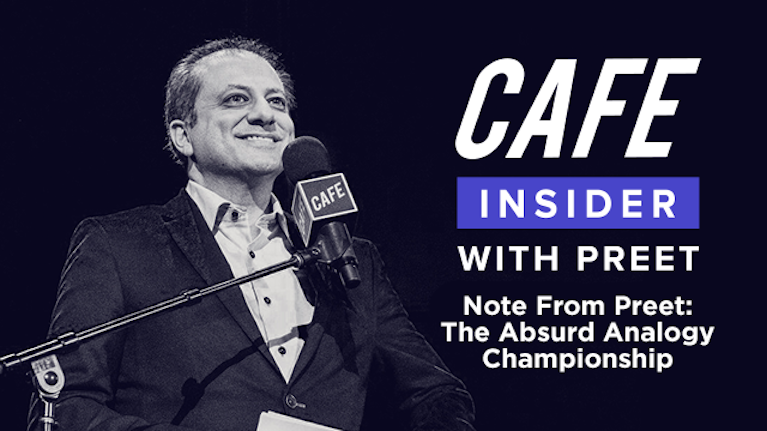