CAFE Insiders can enjoy this recording of Preet reading his note, “The Fallacy That A Critic Is Endowed With The Skill To Fix That Which Is Ably Criticized,” and read his note in the CAFE Insider Newsletter every Thursday.

In the world of medicine, it is typically the doctor who both makes the diagnosis and prescribes the treatment. There are exceptions of course, as when your general practitioner says you’ve broken a bone and sends you to an orthopedist to handle the treatment. But generally speaking, the competence in diagnosis and in treatment resides in the same person. Your eye hurts, you go to the ophthalmologist, she concludes you have a scratched cornea, she treats you with some eye drops, and warns you away from contact lenses for a week. Same drill usually for a cardiologist, a urologist, or an oncologist. And this all makes good sense.

I’ve been thinking lately that this expectation, which is sensible in medicine, is quite foolish and even dangerous in politics. The rhetorically adept politician who can well articulate what ails the body politic is often woefully inadequate to the task of healing it. And yet voters are often taken in by the resonance of the diagnosis and sweep such people into office.

Donald Trump is the latest and most awful example. Whatever else you may think of him, he presented, in 2016, a powerful and resonant diagnosis of what was sick and wrong about American politics and government. I acknowledged as much in the first speech I gave after being fired more than three years ago, at Cooper Union: “[Y]ou know what? There is a swamp. A lot of the system is rigged. And lots of your fellow Americans have been forgotten and left behind. Those are not alternative facts. That is not fake news.”

But Donald Trump is not a doctor. He has no earthly idea how to lead, govern, or make America great. As I also said in that speech:

To drain a swamp, you need an Army Corps of Engineers – experts schooled in service and serious purpose – not do-nothing, say-anything neophyte opportunists who know a lot about how to bully and bluster, but not so much about truth, fairness, and justice. Draining a swamp takes genuine commitment to justice and fairness, not just attention to what benefits one group over another, or divides one group against another.

No, Donald Trump is not a doctor. He is a critic.

Unlike a highly trained medical specialist, a professional critic can, if capable, handle only the first part of the problem: the diagnosis. She may be able to artfully explain what is imperfect in the book or the play or the movie, but not necessarily how to fix it. And rarely is she able to produce a fine book, play, or movie of her own. Most critics can only dissect, not create.

Again, I know there are exceptions and I think critics serve a necessary role, but most always even the best critic is a shabby creator. Take, for example, perhaps the most influential and prominent film critic of the past half century: Roger Ebert. He began writing movie reviews for the Chicago Sun-Times in 1967; the television review show in which he starred as one half of Siskel and Ebert was a hit. I remember watching it religiously when I was young. Ebert was so well respected as a critic that in 1975 he won the Pulitzer Prize for Criticism, the first film critic in history to receive the award. So whatever you thought of his taste in movies, Roger Ebert was an acknowledged great in the field.

So, did he ever try his hand at making a film, rather than just diagnosing their ills? He sure did. He wrote the screenplay for the campy Russ Meyer film, Beyond the Valley of the Dolls, which was released in 1970. How did the critics react to this critic’s work? Not well. His future television co-host, Gene Siskel, gave it zero stars out of four. Zero. Siskel wrote that the picture “unfolds with all of the humor and excitement of a padded bra.” The Washington Post’s critic called it “a mess, a disaster, a stinkeroo, the most wretched of wretched movies.” In recent years, the movie has gained something of a cult following, but it was soundly panned by Ebert’s own peer group.

I realize the oddity of even indirectly comparing Donald Trump to Roger Ebert, but I hope you take my point. Trump exposes spectacularly the fallacy of believing that the critic is endowed with the skill to fix that which is ably criticized. Trump doesn’t know the first thing. He can spot flaws in the system, shout about them, exploit the resentments about them, and get elected doing so. But fix them? Not a chance. Like a movie critic who has no idea how to make an Oscar-winning film, Trump has no idea how to govern a country well.

The lesson here is that all voters should ask themselves not just who best articulates what ails America, but who best shows the capability and competence to heal the country. Those are two separate questions and often yield quite different answers, and while this sounds painfully obvious, millions and millions of Americans fail to make the distinction.

There’s a scene from the movie Birdman that sticks in my mind. Michael Keaton plays Riggan Thomson, a washed-up former box office star attempting a comeback with an ambitious Broadway play. Thomson is in a bar and confronts a drama critic who is going to sink his play with a devastating review. Thomson rages against the critic, getting up in her face, lashing out with expletives, saying of her expected critique: “It’s just a bunch of crappy opinions backed up by even crappier comparisons. . . .” Then he makes the real point: “None of this costs you f-ing anything. You risk nothing. Nothing. Nothing. Nothing. I’m a f-ing actor. And this play cost me everything.”

As we continue to suffer the risks and costs of this pandemic, voters’ failure to distinguish between the doctor and the critic could cost our country everything.

Be kind and be well. 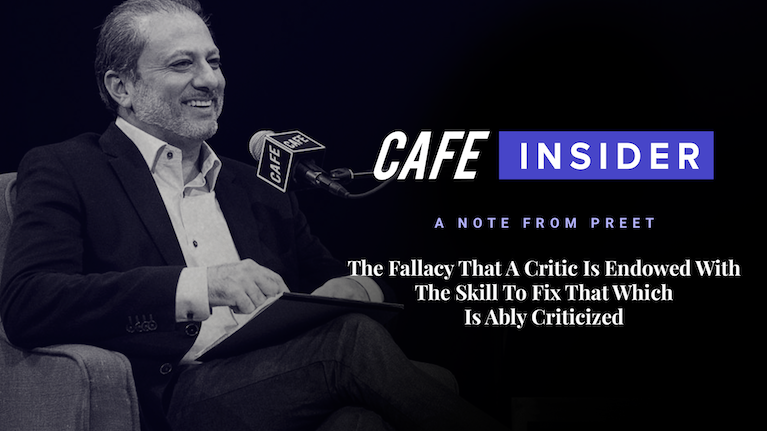 Note From Preet: The Fallacy That A Critic Is Endowed With The Skill To Fix That Which Is Ably Criticized