CAFE Insiders can enjoy this recording of Preet reading his note, “The last analysis is, what has man done?” and read his note in the CAFE Insider Newsletter every Thursday.

Like everyone, I’ve been thinking a lot about the case against the officers who killed George Floyd. I’ve also been thinking about policing, racism, and the way forward. Another case, a very different case, from nearly a century ago, comes to mind because of its continuing relevance, the nature of the facts, and the eloquence of the defense summation. It’s one that I mention in my book, that I quote from time to time, and memorized in tenth grade for speech competitions. It has had a deep impact on me, and I thought I would share an extended excerpt here.

The facts were these: Dr. Ossian Sweet had moved his family into a new house in a neighborhood in Detroit. Dr. Sweet was a black man, and his white neighbors didn’t want a black family in their midst. It was 1925.

On their second night in the house, an angry mob descended. The mob yelled and threw rocks.

In the ensuing chaos, while defending the home, Dr. Sweet’s younger brother, Henry, fired a gun into the crowd. A white man was killed.

And so the 21-year-old Henry Sweet found himself on trial for murder. Luckily for him, his lawyer was Clarence Darrow.

And in the case of the People v. Henry Sweet, Clarence Darrow delivered one of the most remarkable summations ever spoken.

Darrow talked about the facts of the case and argued the doctrine of self-defense. But he also talked about justice generally and the plight of black people in America, with an eye on the legacy of slavery and persistent racism. And he preached that the essence of justice did not reside in the law alone. That’s something to remember as we all discuss changes to the law now.

The speech is 94-years-old and, sadly, still timely. This is how Darrow concludes:

We come now and lay this man’s case in the hands of a jury of our peers – the first defense and the last defense is the protection of home and life as provided by our law. We are willing to leave it here. I feel, as I look at you, that we will be treated fairly and decently, even understandingly and kindly. You know what this case is. You know why it is. You know that if white men had been fighting their way against colored men, nobody would ever have dreamed of a prosecution. And you know that, from the beginning of this case to the end, up to the time you write your verdict, the prosecution is based on race prejudice and nothing else.

Gentlemen, I feel deeply on this subject; I cannot help it. Let us take a little glance at the history of the Negro race. It only needs a minute. It seems to me that the story would melt hearts of stone. I was born in America. I could have left it if I had wanted to go away.

Some other men, reading about this land of freedom that we brag about on the 4th of July, came voluntarily to America. These men, the defendants, are here because they could not help it. Their ancestors were captured in the jungles and on the plains of Africa, captured as you capture wild beasts, torn from their homes and their kindred; loaded into slave ships, packed like sardines in a box, half of them dying on the ocean passage; some jumping into the sea in their frenzy, when they had a chance to choose death in place of slavery. They were captured and brought here. They could not help it. They were bought and sold as slaves, to work without pay, because they were black.

They were subjected to all of this for generations, until finally they were given their liberty, so far as the law goes,–and that is only a little way, because, after all, every human being’s life in this world is inevitably mixed with every other life and, no matter what laws we pass, no matter what precautions we take, unless the people we meet are kindly and decent and human and liberty-loving, then there is no liberty. Freedom comes from human beings, rather than from laws and institutions.

Now, that is their history. These people are the children of slavery. If the race that we belong to owes anything to any human being, or to any power in this Universe, they owe it to these black men. Above all other men, they owe an obligation and a duty to these black men which can never be repaid. I never see one of them, that I do not feel I ought to pay part of the debt of my race,–and if you gentlemen feel as you should feel in this case, your emotions will be like mine.

Gentlemen, you were called into this case by chance. It took us a week to find you, a week of culling out prejudice and hatred. Probably we did not cull it all out at that; but we took the best and the fairest that we could find. It is up to you.

So, gentlemen, I am justified in saying that this boy is as kindly, as well disposed, as decent a man as any one of you twelve. Do you think he ought to be taken out of his school and sent to the penitentiary?

… You know, if he committed any offense, it was being loyal and true to his brother whom he loved. I know where you will send him, and it will not be to the penitentiary.

Now, gentlemen, just one more word, and I am through with this case.

… I am the last one to come here to stir up race hatred, or any other hatred. I do not believe in the law of hate. I may not be true to my ideals always, but I believe in the law of love, and I believe you can do nothing with hatred. I would like to see a time when man loves his fellow man, and forgets his color or his creed. We will never be civilized until that time comes.

I know the Negro race has a long road to go. I believe the life of the Negro race has been a life of tragedy, of injustice, of oppression. The law has made him equal, but man has not. And, after all, the last analysis is, what has man done?–and not what has the law done? I know there is a long road ahead of him, before he can take the place which I believe he should take. I know that before him there is suffering, sorrow, tribulation and death among the blacks, and perhaps the whites. I am sorry. I would do what I could to avert it. I would advise patience; I would advise toleration; I would advise understanding; I would advise all of those things which are necessary for men who live together.

Gentlemen, what do you think is your duty in this case? I have watched, day after day, these black, tense faces that have crowded this court. These black faces that now are looking to you twelve whites, feeling that the hopes and fears of a race are in your keeping.

This case is about to end, gentlemen. To them, it is life. Not one of their color sits on this jury. Their fate is in the hands of twelve whites. Their eyes are fixed on you, their hearts go out to you, and their hopes hang on your verdict.

Henry Sweet was acquitted by the all-white jury.

Be kind and be safe. 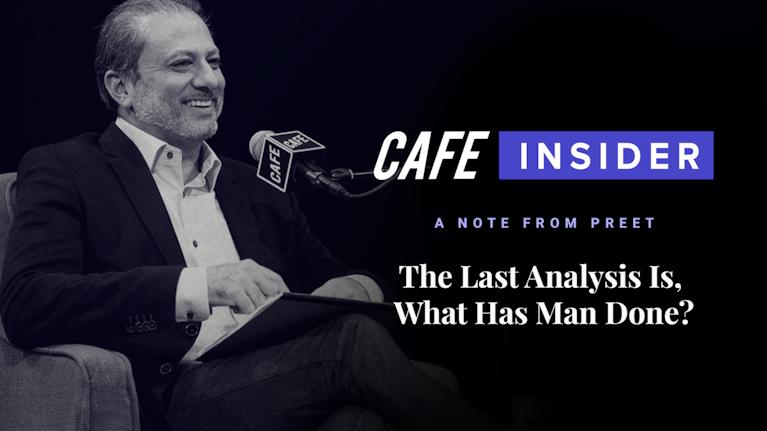 Note From Preet: The last analysis is, what has man done?