Courtroom trials are unpredictable affairs. They never go according to script. Almost never, anyway. The witnesses and the lawyers (and the judge) are people, not robots, so you can never be sure what they will say or do.

That’s why good trial lawyers follow a cardinal rule. In the face of an unexpectedly harmful bit of testimony, never let the sting show. The jurors are people too, and they inevitably take cues from the lawyers. A witness’s answer may seem damaging to the prosecution, but if the prosecutor seems unfazed, jurors may doubt their first impression. I remember being taught this principle in law school. Even if your own witness says something unexpected and harmful to the case, not only should you appear unperturbed, but nod as if – of course – that is the answer I expected and thank you very much.

Q: “What were you doing just before you got a look at the man running away from the bank?”

A: “I was on my fifth beer at the bar across the street, and I was agitated because I couldn’t find my glasses.”

Of course you were. I totally expected that. Nod.

Okay, that’s an extreme hypothetical, but you get the point. The worst thing you can do is reveal your sinking heart. In addition to highlighting the bad testimony, you look unprepared, unprofessional, and out of your depth. You have lost authority and credibility. You look weak, not strong. That, in the end, can be far worse for your case’s prospects than the testimony itself. One time back at SDNY, I was on the subway heading to work and reading the news coverage of a significant criminal trial we had in progress. On direct examination, a prosecutor elicited a bad answer from the government’s own witness. The prosecutor, the article said, “looked startled.”  That should never happen. Never look like a deer in the headlights. That prosecutor got a talking to.

Now this may seem like an odd leap, but it has occurred to me that President Trump has fully internalized this trial principle. Think about it. While we armchair journalists are constantly chiding reporters for not shellacking the president with devastating Perry Mason questions, the truth is he gets plenty of hard and direct interrogatories. He got them from Axios’s Jonathan Swan. He got them from Fox News’s Chris Wallace. He sure got them from average citizens this week at an ABC town hall.

But there is one thing he never does. He never lets the sting show. When presented with the awful fact that almost 200,000 Americans are dead from the pandemic, he says with a straight face, sure, but it could have been millions. He says one day that he will introduce a health care plan in two weeks. When two weeks comes and goes and he is asked again, he says, yup, coming in two weeks. This should be a devastating moment, but he just brushes by it. He’s able to do this in part because integrity and intellectual honesty mean nothing to him. He cares only about the appearance of strength. Watch him in a tough interview on mute (as reportedly he himself does). Except for flashes of anger, he generally has the same demeanor in response to friendly questions as hostile ones. He never looks startled. He never seems on the ropes, even when he is. He is playing, always, to his base – his jurors – whose minds are made up, who see a strong and forceful leader, one who never backs down from these pesky reporters with their liberal biases and their gotcha questions.

The one thing Trump cannot afford to be is weak-looking. He cannot look like a deer in the headlights, and whatever you think of him, he almost never does. If he could be revealed to be weak and afraid, that might hurt him with his base, and perhaps only that. Voters, like jurors, take their cues from the players.

This is why a new digital ad campaign from the Biden folks caught my eye. Contrary to my observations above, two recent ads literally describe Trump as a “deer in the headlights.” The spot begins, “When coronavirus came, Trump froze like a deer in the headlights.” The narrator says later, “And there was our president, unprepared, indecisive, frozen.” He also says Trump has been “too scared to act, too panicked to tell the truth, too weak to lead.” The ad, interestingly, takes a new tack on Trump’s lies. It doesn’t hit him, directly, for lying. It identifies a reason for his lies. And that is the criticism, the thing that Trump can’t abide. The ad says Trump “was too panicked to tell the truth” about the pandemic. That is an interesting twist.

It’s a good ad, but I’m biased. I don’t know if it will be effective, if it will move the needle with any of Trump’s die-hard fans. But what it seeks to do is hit him where it hurts most, portray him as the one thing he strives never to look like: weak. Trump doesn’t mind looking mendacious, authoritarian, illiterate, or inarticulate.

But if he ever does look like a deer in the headlights, it’s over. 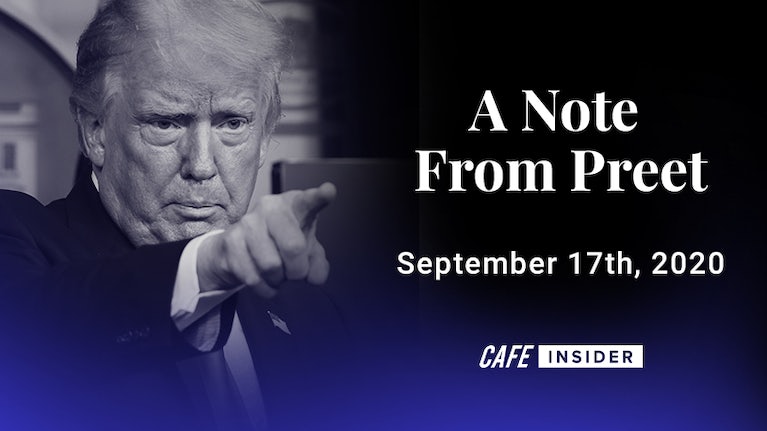