CAFE Insiders can enjoy this recording of Preet reading his note, “We Are One Country, One People, But McConnell Begs to Differ” and read his note in the CAFE Insider Newsletter every Thursday.

I have been in Kentucky one time.

It was business, not pleasure, and the circumstances were a little unusual. It was January 2016, and I had been invited to give a speech. Not to the general public, but to the entire Kentucky state legislature, on the vexing issue of public corruption. The invitation had come on the heels of our office, SDNY, having convicted at trial the two most powerful men in the New York state legislature – Speaker of the Assembly, Sheldon Silver, and Majority Leader of the Senate, Dean Skelos. Those convictions had come after we had sent a slew of other corrupt lawmakers to prison.

It was against that backdrop that Kentucky officials invited me to address the entire legislative body on the occasion of their mandatory ethics training session. I smiled at the idea that Kentucky lawmakers wanted to hear from me before their local New York counterparts, many of whom held me in contempt. In preparing my address, I learned that Kentucky had had its own share of ethics scandals. But rather than do nothing, the state had passed tougher campaign finance laws than New York ever had on the books and instituted restrictions on lobbying, including one known as the “no cup of coffee” rule – a lobbyist can’t so much as buy a cup of joe for a lawmaker. And now they were prepared to hear from a Yankee on how they might do even more.

I started off in the chamber with a joke: “Something like this has always been on my bucket list: To be in a room full of legislators who are required to be here, while I still have subpoena power.” They laughed. I said not to worry. “You are not being wiretapped. At this moment. At least not by my office.” The lawmakers were attentive, receptive, and engaged. There was a spirited question-and-answer session. As the Wall Street Journal reported at the time, “Mr. Bharara drew occasional laughter, nodding approval and gasps of disbelief, particularly when he quoted wiretapped phone conversations and other evidence from recent corruption trials.”  I felt that, as a body, at least at that time, these folks got it much better than the leaders in my own state. I felt welcome. I even tweeted a picture from Kentucky.

Last Sunday, I tweeted about Kentucky again, this time in anger.

Here’s the tweet: “I too am sick and tired of subsidizing Kentucky.” It has been a surprisingly popular tweet. As of this writing, it has more than 100,000 likes, 16,500 retweets, and almost six million views. But it angered some people too, especially in Kentucky, who found it callous, condescending, and divisive. In normal times, that would arguably be fair criticism. In normal times, I would not have said such a thing. And context matters a hell of a lot.

What is the context? There are more than 61,000 Americans dead from COVID-19. More than 18,000 of them lived in New York. I live and work minutes from the northeast epicenter of the pandemic. New York has been hit harder than any other state in the union. Hundreds are still dying, every day. New York is proud and also resilient, as 9/11 proved. But now it needs federal aid, proportional federal aid, commensurate with its loss.

And what is the reaction of the most powerful politician in Kentucky, the second most powerful Republican in the nation, to New York’s need? Senate Majority Leader Mitch McConnell said he supports “stopping blue state bailouts,” and proposes such states go bankrupt. That is his response. Now that’s what I would call callous, condescending, and divisive. It’s also shockingly myopic. As Governor Andrew Cuomo has been reciting almost daily, while Kentucky annually takes $37 billion more from the federal government than it gives, New York annually gives $29 billion more than it takes. As he puts it, New York has long been a giver state, while Kentucky has long been a taker state. And so, for years and years, who has been bailing out whom?

That’s the context. It is not heartlessness towards the people of Kentucky. It’s a reaction to the heartlessness of their most powerful political leader. It’s stunning, really. It’s like you take from your parents all your life growing up. Then you have means. And when your dad, who carried you for decades, suddenly – and through no fault of his own – becomes catastrophically ill, you say, “Sorry, pops. No bailout for you. It’s Chapter 11 time.” That’s what McConnell is saying.

Do I really think the richer states should screw the poorer states? No. We are one country. We are one people. The people of Kentucky are my fellow Americans, my brothers and sisters. And as I expressed above, its state lawmakers impressed me four years ago, more than New York’s. I believe in a social safety net. I believe in progressive taxation. I believe that I need to do more and pay more because I earn more and I am privileged. I pay my taxes because it’s my duty, and I expect as an individual not to be given more by the federal government than I have paid. I’ve spent most of my career in public service. I believe deeply the principle that you give back, that you use your advantages to lift other people up. And as a nation, when a hurricane ravages Florida or a flood destroys New Orleans or a terrorist attack brings a city to its knees, the federal government must do its part. That’s what being a nation means.

And so when a “taker” state’s most powerful leader chooses this moment to tell New York to drop dead, with thousands more just sent to the morgue, that’s a deeper kind of corruption than the things I talked about with Kentucky’s legislators four years ago, and I’m sure as hell gonna get mad about it. 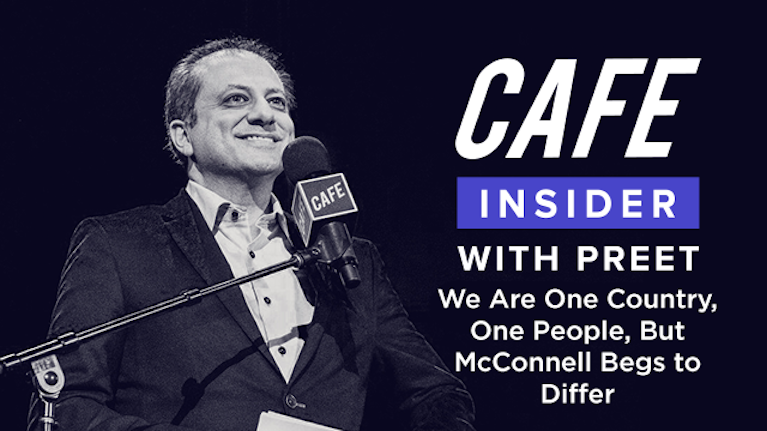 Note From Preet: We Are One Country, One People, But McConnell Begs to Differ