CAFE Insiders can enjoy this recording of Preet reading his note, “Will Our Relationships Be The Same?” and read his note in the CAFE Insider Newsletter every Thursday.

Greetings from lockdown, Day 77. Back at the start of the pandemic, when mass death was a grim projection we could root against rather than a stark reality we must grapple with, I made some observations about relationships. Though handshakes and hugs were suddenly forbidden, friends reached out across time and distant geography to check in on other friends. People I hadn’t heard from in ages texted and called, and I did the same. I’ve heard similar stories from many people. We bonded and braced together.

But as days of anxiety turned into weeks and months, with debates about treatment and mitigation and reopening becoming ever more fevered and politicized, I have noticed another phenomenon. Debates have turned into fights. Grief mingles with anger, not just at government officials but also sometimes at friends and neighbors who disagree about masks or social distancing. I’ve seen a number of rifts in friendships over these passionate differences.

Yesterday morning, I saw two normally collegial CNBC anchors scream at each other over the coronavirus death toll. On Squawk Box, Joe Kernen accused Andrew Ross Sorkin of panicking about COVID-19, about PPE, about the market. A visibly angry Sorkin shot back: “One hundred thousand people died. One hundred thousand people died, Joe, and all you did was try to help your friend the President. Every single morning on this show. You abused your position.” I’ve appeared on this show with both anchors; they banter and debate, but this was something different. And increasingly common.

The other day I mused about this developing dynamic on Twitter: “Will we be friends with the same people after this?”

The question seemed to strike a chord. There are almost 7,000 replies so far. There was admittedly some ambiguity in what I meant by “this.” Many took it to mean the Trump presidency. Some mentioned relationships permanently ended over disagreement about Trump and his conduct or his policies. But friendships hurt by Trumpian politics have been a storyline for a few years now. I was addressing something different.

By “after this,” I meant after the pandemic. Scores of people responded, tartly, “Nope,” without further explanation. Some pointed out the obvious: among the 100,000 dead are friends who are never coming back. Others expressed frustration at the behavior and attitude of erstwhile friends.

For more people than we may have realized, the pandemic has forced a type of unmasking, if you will, which has nothing to do with the NSA.

One follower said, “No. I’m seeing way too much selfishness from my friends this weekend. Wife and I making plans now to start making some cuts. How hard is it to wear a damn mask? This is not a game & I don’t want selfish ppl in our life.” A number of replies echoed this sentiment, like this one: “I will never be friends with someone who has the disrespect to go in a Public place without a mask on. NEVER!”

Another applied an increasingly popular label to their own brother: “I just found out one of my brothers is a Covidiot.” In a similar vein, someone wrote, “Friends? I’m looking into how to divorce relatives.”

Others were more specific about the transgressions that ended friendships: “No. We’ve severed ties with someone who was a friend. Her belief in herd immunity & position that Fauci should be in prison killed an already tenuous friendship.”

For certain people, however, the offense in this time of pandemic has nothing to do with views about PPE or the efficacy of hydroxychloroquine; it’s less about safety than sensibility. For some, humor itself should take a permanent holiday through this. Some were offended that I interviewed comedian Mike Birbiglia during the pandemic, for a little comic relief. The other day I made this joke on Twitter, playing on the President’s recent comments demonstrating he has no idea what “per capita” means. I wrote, “Per capita we have a bad president.”

Most appreciated the joke. But a longtime follower replied, “No we have a murderous president. This seems callous and not funny. Enough with the wit, jokes and books.” The follower added, “I’m sorry you lost your job. People are dying and we need appropriate outrage.” I took the unusual step of responding, because I meant no offense: 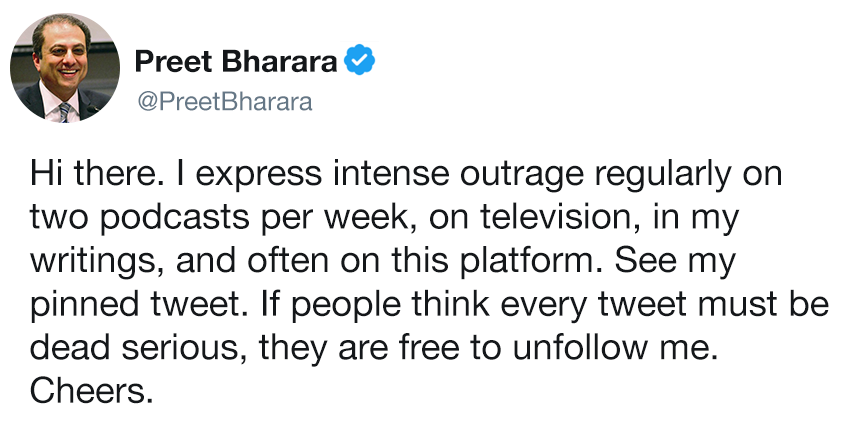 They promptly did. And blocked me too.

To be clear, I don’t begrudge anyone an unfollow. I myself stopped following Elon Musk during this pandemic. I admire the man. He’s a visionary entrepreneur. Teslas are beautiful. I too watched expectantly for the SpaceX launch yesterday. But Musk became an annoying Twitter follow for me — between his belligerent, martyr-like anti stay-at-home stance and his utterly stupid prediction that there would be “probably close to zero new cases” by the end of April. I can like his products without liking his pronouncements.

It is a tragic time. One hundred thousand of our fellow Americans are now lost to this virus. It is incomprehensible. Tempers are short. Nerves are frayed. Grief and anxiety pervade everything. We all cope in whatever way we can. If that means cutting out certain content or suspending certain friendships, I suppose that is a kind of mental health measure, not just a personal freedom. And maybe it makes us appreciate the continuing relationships a bit more. Let me know if you’re experiencing any of the things I mention above. I’m truly curious. 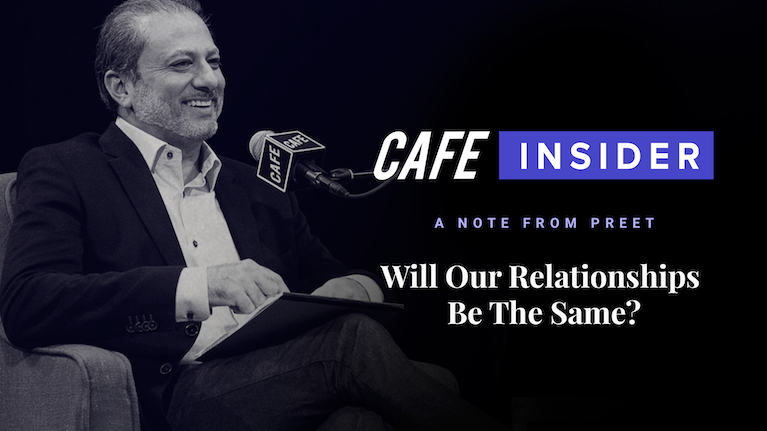 Note from Preet: Will Our Relationships Be The Same?