CAFE Insiders can enjoy this recording of Preet reading his note, “Words That Have Touched Me” and read his note in the CAFE Insider Newsletter every Thursday.

This week, I use this limited space to quote some Black voices and words that have touched me or members of my family:

It comes as a great shock around the age of 5, or 6, or 7, to discover that the flag to which you have pledged allegiance, along with everybody else, has not pledged allegiance to you. . . . It comes as a great shock to discover that the country which is your birthplace and to which you owe your life and your identity, has not, in its whole system of reality, evolved any place for you. The disaffection, the demoralization, and the gap between one person and another only on the basis of the color of their skin, begins there and accelerates – accelerates throughout a whole lifetime – to the present when you realize you’re thirty and are having a terrible time managing to trust your countrymen. By the time you are thirty, you have been through a certain kind of mill. And the most serious effect of the mill you’ve been through is, again, not the catalog of disaster, the policemen, the taxi drivers, the waiters, the landlady, the landlord, the banks, the insurance companies, the millions of details, twenty-four hours of every day, which spell out to you that you are a worthless human being. It is not that. It’s by that time that you’ve begun to see it happening, in your daughter or your son, or your niece or your nephew.

Ships at a distance have every man’s wish on board. For some they come in with the tide. For others they sail forever on the same horizon, never out of sight, never landing until the Watcher turns his eyes away in resignation, his dreams mocked to death by Time. That is the life of men.

Earlier today, we heard the beginning of the Preamble to the Constitution of the United States, “We, the people.” It is a very eloquent beginning. But when the document was completed on the seventeenth of September 1787 I was not included in that “We, the people.” I felt somehow for many years that George Washington and Alexander Hamilton just left me out by mistake. But through the process of amendment, interpretation, and court decision, I have finally been included in “We, the people.”

The service you do for others is the rent you pay for your room here on earth.

And America, too, is a delusion, the grandest one of all. The white race believes – believes with all its heart – that it is their right to take the land. To kill Indians. Make war. Enslave their brothers. This nation shouldn’t exist, if there is any justice in the world, for its foundations are murder, theft, and cruelty. Yet here we are.

Ta-Nehisi Coates, Between the World and Me:

So you must wake up every morning knowing that no promise is unbreakable, least of all the promise of waking up at all. This is not despair. These are the preferences of the universe itself: verbs over nouns, actions over states, struggle over hope.

Perhaps it is easy for those who have never felt the stinging darts of segregation to say, “Wait.” But when you have seen vicious mobs lynch your mothers and fathers at will and drown your sisters and brothers at whim; when you have seen hate filled policemen curse, kick and even kill your black brothers and sisters; when you see the vast majority of your twenty million Negro brothers smothering in an airtight cage of poverty in the midst of an affluent society; when you suddenly find your tongue twisted and your speech stammering as you seek to explain to your six year old daughter why she can’t go to the public amusement park that has just been advertised on television, and see tears welling up in her eyes when she is told that Funtown is closed to colored children, and see ominous clouds of inferiority beginning to form in her little mental sky, and see her beginning to distort her personality by developing an unconscious bitterness toward white people; when you have to concoct an answer for a five year old son who is asking: “Daddy, why do white people treat colored people so mean?”; when you take a cross county drive and find it necessary to sleep night after night in the uncomfortable corners of your automobile because no motel will accept you; when you are humiliated day in and day out by nagging signs reading “white” and “colored”; when your first name becomes “n_____” your middle name becomes “boy” (however old you are) and your last name becomes “John,” and your wife and mother are never given the respected title “Mrs.”; when you are harried by day and haunted by night by the fact that you are a Negro, living constantly at tiptoe stance, never quite knowing what to expect next, and are plagued with inner fears and outer resentments; when you are forever fighting a degenerating sense of “nobodiness” – then you will understand why we find it difficult to wait.

Each of us is more than the worst thing we’ve ever done.

The caged bird sings
with a fearful trill
of things unknown
but longed for still
and his tune is heard
on the distant hill
for the caged bird
sings of freedom. 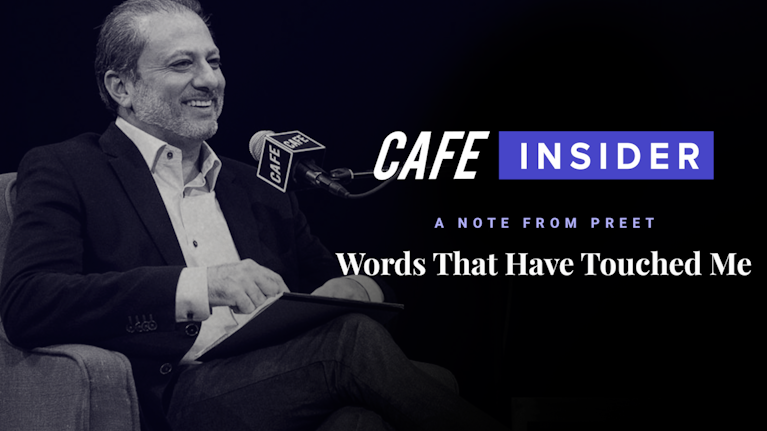 Note From Preet: Words That Have Touched Me