In this episode of Third Degree, Elie Honig assesses the likelihood that hate crime charges will be brought against the shooter who killed eight people, including six Asian women, last week in Atlanta.

Join Elie every Monday and Wednesday on Third Degree for a discussion of the urgent legal news making the headlines. Third Degree takes on a bit of a different flavor on Fridays, when Elie speaks with a rotating slate of America’s most impressive law school students.

Hey, everybody. As many of you know, each Friday on the Third Degree podcast, I speak with a rotating cast of some of the nation’s top law students about breaking legal news, compelling cases, and what it means to lead a life in the law. These episodes are a part of the Café Insider membership. Insiders get exclusive content, including a weekly podcast hosted by Preet Bharara and Anne Milgram, audio notes from contributors, including me, and bonus content from Stay Tuned and Doing Justice. You can now become a member for half the annual membership price. Just head to café.com/insider and enter the special code, DEGREE. That’s café.com/insider, and the discount code is DEGREE. Now, onto the show. From Café, this is Third Degree. I’m Elie Honig.

The man who shot and killed eight people in three salons in Georgia will never live another day outside of jail. I don’t do predictions often, but I’m confident in that. Now, he’s charged with eight counts of murder under Georgia state law. One for each victim. There’s essentially no question that he did it. He’ll likely get not just one life sentence, but probably eight of them, consecutive, meaning stacked end-to-end. Of course, obviously, a person can only serve one life sentence. Why, by the way, I get asked sometimes, do courts impose multiple life sentences? In this case, we’ll probably see eight. There’s two reasons for that.

First of all, just in case there ends up being some problem with one part of the case, or maybe with one count, some issue that causes part of the case, some but not all counts, to be reversed. It’s important to have other sentences on other counts in place, just in case. Second, it’s symbolic. On a multiple murder case, for example, each of the victims, the families, deserves individualized justice. One of our systematic goals is retribution. Setting even the scales of justice. Of course, that can never fully happen when a life is taken, but better that each life lost be formally recognized. So, he’s charged with eight murders. He’s not getting out. But that’s not necessarily the end of the story when it comes to criminal charges in the Georgia case. It shouldn’t be at least. Because prosecutors also have to deal with an important question about hate crime laws. Could hate crime laws apply here? Should they be charged?

First, the Georgia state hate crime law. Now, this is actually a brand new state-level statute. It was just passed last year, June of 2020. It was passed after the Ahmaud Arbery murder, and likely largely spurred on because of the Ahmaud Arbery murder. That trial is still ahead of us. Now, Georgia became one of the very last states to enact some form of hate crime law. Arkansas, South Carolina, and Wyoming are now the only states in the union that do not have some version of a hate crime law, although they’re all considering hate crime laws in various stages of legislation. One thing to know about the Georgia law, it’s not a freestanding crime. You can’t charge a defendant only with hate crimes. You have to tack it on top of another crime. In this case, it would be murder.

The Georgia law applies if the defendant targeted a victim because of the victim’s actual or perceived race, color, religion, national origin, sex, sexual orientation, gender, mental disability, or physical disability. What’s the application here? Obviously, it applies if the shooter targeted Asian Americans. Now, you’ve probably seen the shooter reportedly told the police he acted because of a “sex addiction.” Okay. I don’t necessarily buy that, first of all. The police absolutely must investigate this fully. They need to look at his social media, talk to all of his friends, look for any evidence of any racial or ethnic bias. If you do just the pure math, six of the eight victims here are Asian. To me, there was some design here, some plan, some targeting. The numbers alone tell you at least part of the story. Also, seven of the eight victims here were women. Remember, the Georgia hate crime law applies to sex and gender. It could be applicable on that basis.

Second, the federal hate crime law. Now, there’s a federal law that’s similar but not identical to the Georgia law. The federal law makes it a crime to target a victim because of that person’s actual or perceived religion, national origin, gender, sexual orientation, gender identity, or disability. Similar, but not exactly identical to the Georgia statute. Now, the federal law was actually amended in 2010. It’s named after Matthew Shepard and James Byrd, two people who were the victims of hate crimes. It was amended to include sex and sexual orientation, which were not previously part of the hate crimes bill. Interestingly, hate crime laws have not always been popular. They’ve not always been unanimously supported.

For example, in 2007, then President, George W. Bush, essentially blocked a bill that would have expanded the federal hate crime law by promising to veto it. President Bush called it “unnecessary and constitutionally questionable.” John Boehner, who was then Speaker of the House, here’s why he objected to the hate crime law. He said, “We’re going to put into place a federal law that says that not only will we punish you for the crime that you actually commit, the physical crime that you commit, but we’re also going to charge you with a crime if we think that you were thinking bad things about this person before you committed the crime.” Then another US Representative at the time said that expanding the hate crimes law was unnecessary and bad public policy. That Representative was future Vice President, Mike Pence.

Now, there is one difference between the federal law and the Georgia law. The federal hate crime law can be charged on its own, as a freestanding crime. This Georgia shooter can be charged under federal law with just straight up hate crime murder. Also, DOJ, federal prosecutors, they can bring charges completely separate and independent from what the state does. The Supreme Court, just a couple years ago, reaffirmed that that’s perfectly fine, for both federal and state prosecutors to charge the same person for the same crime. Now, will the feds bring a charge? I think the most likely scenario here is the feds are going to wait in the background as a wait and see, an insurance policy. For now, the Georgia state authorities have this case. They have the charge.

If the shooter ends up convicted in Georgia, and doing life, maybe the feds won’t see any need to charge him, as well, especially if Georgia goes through and charges a hate crime. But if, by some bizarre circumstance, this shooter beats the case in Georgia, or doesn’t get enough punishment, then the feds might step in and bring charges of their own. By the way, the feds still have plenty of time. There’s actually no statute of limitations on hate crimes murder, as of now. So, the feds can bring this charge at any time they wish. I think of federal charges here as an emergency measure, a last resort, if all else fails.

Then third, what’s the point? Like I said upfront, no matter what, the shooter almost certainly will never walk free again. Some have asked why? Why pile on more charges? What purpose does that serve? My answer is because the message matters. The symbolism, the statement that goes along with a hate crime charge. Ultimately, we don’t yet know for sure if the evidence will or won’t support hate crime charges, federal or state. I’m skeptical of this, “Well, he had a sex addiction. So, it can’t be a hate crimes conclusion.” I think that needs to be looked at much more closely. At a minimum, it needs a full investigation. If it turns out hate crime charges are warranted, then yes, they absolutely must be added.

I know a person can’t serve more than a life sentence, but it matters. It matters to the victims’ families if their family member was targeted because of race, or national origin, or sex, or gender, and it matters to all of us, as society. That’s not me, moralizing. That’s reflected in our laws. That is why we have hate crime laws in the first place. We, collectively, have made a judgment that it is worse to kill somebody because of racial hatred than for other reasons. That’s an important value. It’s enshrined in our laws, and those laws need to be brought to bear.

Thanks for listening to another episode of Third Degree. As always, I really enjoy hearing your thoughts, comments, and questions. Please keep sending them to us at [email protected] 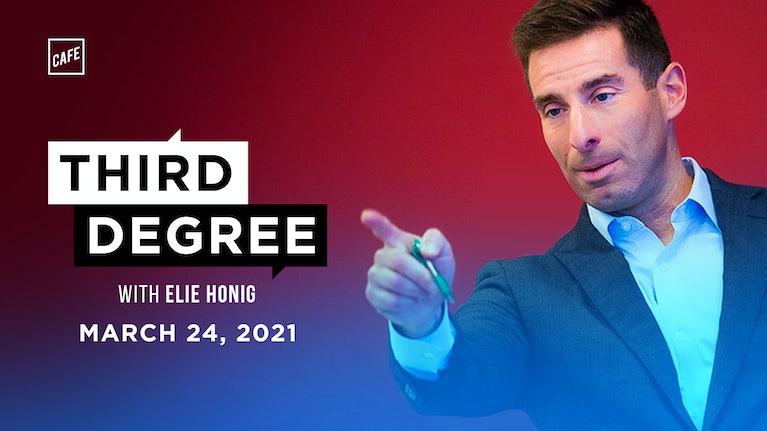