In this episode of Third Degree, Elie Honig discusses the series of allegations against Florida Republican Congressman Matt Gaetz—including for sex trafficking, extortion, transportation of a minor, and prostitution.

Join Elie every Monday and Wednesday on Third Degree for a discussion of the urgent legal news making the headlines.

Third Degree takes on a different flavor on Fridays, when Elie speaks with a rotating slate of America’s most impressive law school students exclusively for members of CAFE Insider. Become a member at half the annual price with special code DEGREE at cafe.com/insider.

Let’s talk about Matt Gaetz. The honorable Matthew Lewis Gaetz II, elected member of the United States House of Representatives for the first district of Florida. I got to be honest, I find Matt Gaetz challenging because I truly would never wish for anybody to get in trouble with the law. I mean that. I’ve seen firsthand how criminal investigation, prosecution, imprisonment can disrupt lives, families, careers, reputations. But Matt Gaetz, well he makes it challenging. Not because of his politics, not because of his worship of Donald Trump, but simply because he’s Matt Gaetz.

I’m going to listen to my better angels here. I am going to hope that all the stuff that’s been alleged and reported about him is not true. That it’s just some colossal misunderstanding on about 10 different fronts. I’ll hope for that. I’ll try to hope for that. The reality here is whatever any of us may want or not want to happen, Matt Gaetz looks to be in a hell of a lot of trouble. Let’s break it down.

First of all, who is Matt Gaetz? If you just looked at Matt Gaetz on paper, his resume, you’d be impressed. Graduated Florida State, William and Mary Law School, worked at a private law firm, elected to the Florida State House of representatives by age 28, elected to the US House of Representatives in 2016 at age 34. He’s now in his third term and member of the House Judiciary and Armed Services Committees. He’s one of the best known and most recognizable members of Congress.

If I grew up with this guy, well not this guy, but a guy like this, he’d be the most successful guy from my high school, again, on paper. Of course there’s paper and then there’s real life. Here’s just a quick run through of some of Matt Gaetz’ most ridiculous, most arrogant, most obnoxious, laughable, unethical, grotesque, perhaps illegal moments. I’m going to limit it to three. There’s many more than this.

First of all, he wore a gas mask on the floor of the United States House of Representatives, making fun of people concerned about COVID. He then voted against the bill providing funding to combat COVID. The final vote was 415 to two. He was one of the two. And then of course he got COVID. Second, he brought a man named Charles Johnson as his guest to Donald Trump’s State of the Union. Johnson is a Holocaust denier. Denies the Holocaust ever happened. When he got called out, Gaetz said he barely knew the guy. He just happened to show up one day and claimed some extra ticket to the State of the Union. Okay.

Johnson himself, by the way, said Gaetz invited him. And then Gaetz just claimed no, Johnson’s not a Holocaust denier, which is exactly what he is, which makes Gaetz in a sense, a Holocaust denier denier. And third, during impeachment Gaetz led the charge of Republican members who stormed the SCIF, the sensitive compartmented information facility, in some sort of protest against what they were calling Adam Shift’s basement bunker.

Despite the fact that Republican representatives were present throughout all the proceedings, even before this, Gaetz compared it to the movie 300, which is some sort of gladiator movie. My friend Dan Goldman, who was counsel to Shift was physically present for this and he has publicly said that it was mostly standing around eating pizza, not quite 300. Gaetz also has engaged in all sorts of racist rhetoric, which I won’t repeat and won’t include here because it’s not worth amplifying. That’s Matt Gaetz, but that’s just the warmup to the even more serious stuff.

Second, the allegations against him now. When you’re a prosecutor, anytime a new case comes in, some supervisor has to assign it to a specific unit. If this case hit my desk, I wouldn’t know where to put it. Could go in the child exploitation unit, could go in the sex crimes unit, narcotics, campaign finance, corruption. Let me say this though, before we go any further, it is early and we really don’t know all the facts. I do mean that. We really don’t know how this comes out. Gaetz has strenuously denied this. We’ll talk more about that in a minute.

But let’s run down the facts as have been publicly reported, fairly well sourced. What it means if they are true. The most serious allegation here is that Gaetz transported a minor across state lines for sexual purposes. If he did that, if the person was under 18 and he either knew or turned a blind eye to it, if he paid for her or took her across the state line and if it was for a commercial sex act, that is a very, very serious federal crime. It has a 10 year mandatory minimum sentence. By the way, there is no parole in the federal system so anyone has to do at least 85% of their time. You get 15% off for good behavior in jail.

There is public reporting about drug use, that he used drugs, that he shared drugs with others, perhaps that he used drugs as some sort of payment. There is potential misuse of campaign funds, if he used any of his campaign money to pay for the transportation of minors or for drugs. There also are separate, not criminal, but separate allegations that he showed naked pictures to other people in the House of Representatives, sometimes on the floor of the house or near the floor of the house and boasted about some kind of crazy point system and scoring system that he had.

Now, Gaetz claims that he is the victim of some sort of far-flung extortion scheme, that somebody is trying to shake him down or his family. Maybe. Who knows. But there are two things I want to stress here. First of all, both can be true. He can have committed some of these bad acts, some of these crimes, and he also could be getting extorted. Second of all, I’m skeptical of these extortion claims because the investigation itself by DOJ, well predates the extortion that Gaetz alleges. In other words, the investigation of Gaetz began back under Donald Trump, when Bill Barr was Attorney General. Gaetz only claims that he was extorted starting a few weeks ago in mid March. If this is all some big extortion scheme, that timeline does not match up.

Finally, what will Gaetz do now? Usually in this situation, when someone’s under this kind of heat, what they do is they batten down the hatches, they go quiet, lay low, get a lawyer, and most importantly, they shut up. Not Matt Gaetz though. Oh no, no, no. Not Matt Gaetz. First thing he does is go on an interview on Fox News with Tucker Carlson. Gaetz was so batty that even Carlson was openly scornful, openly stunned by him. And there was this awkward, depending on your perspective, hilarious moment where Gaetz essentially acknowledged that yes, some girl existed and he had taken her to a dinner with Tucker Carlson.

You and I went to dinner about two years ago, your wife was there and I brought a friend of mine, you’ll remember her.

And he said, you remember her? And Carlson said, “I remember no such thing”.

I don’t remember the woman you’re speaking of or the context at all. Honestly.

Was this this alleged 17 year old? Who knows. But Gaetz himself affirmatively brought up a particular girl and a particular dinner. Carlson decidedly did not appreciate that. And since then, Gaetz has released a wild stream of confusing, contradictory public statements that make no sense when pieced together. Maybe that’s the strategy. Maybe the strategy is just to make this whole thing seems so batty, so sorted that people would just go, “Who can keep track of who? These allegations are right out of a Lifetime Hallmark movie and way worse.” And if he just sort of confuses matters to the point of no return, maybe people will lose focus.

He’s also claiming the usual leaks and witch hunt. Though again, that’s a tough putt given that this investigation started under his hero, his idol, Donald Trump’s DOJ. Gaetz does seem to be taking a page here from Donald Trump using the old Roger Stone, Roy Cohn credo that Trump himself embraced, “Admit nothing, deny everything, launch counter attack”. The problem is Matt Gaetz may not realize it, but he’s no Donald Trump. For one thing, he’s not the president. He won’t enjoy any of the immunities or any of the delay tactics that Trump used so effectively when he was president.

For another thing, Matt Gaetz doesn’t have a nationwide base. Donald Trump, no matter what he does, retains the loyalty of about 30% of the American public. Matt Gaetz has no such built in base. The Republican party has hung by Matt Gaetz, but watch, they will cut him loose if and when he no longer suits them. All right, I made it through. I talked Matt Gaetz. I think I stayed mostly calm and appropriate enough, right? But this sorted tale is just beginning. We are going to learn a lot more in the weeks and the months ahead. There’s really only two possibilities when you boil it down. One, Matt Gaetz has been absolutely unfairly set up and targeted or two, Matt Gaetz is in a huge amount of trouble. We shall see.

Thanks for listening to Third Degree, everybody. As always, send us your thoughts, comments and questions at [email protected] Third Degree is presented by CAFE Studios. Your host is Elie Honig. The executive producer is Tamara Sepper. The senior producer is Adam Waller. The technical director is David Tatasciore. The audio and music producer is Nat Weiner. And the CAFE team is Matthew Billy, David Kurlander, Sam Ozer-Staton, Noa Azulai, Jake Kaplan, Geoff Isenman, Chris Boylan, Sean Walsh and Margot Maley. 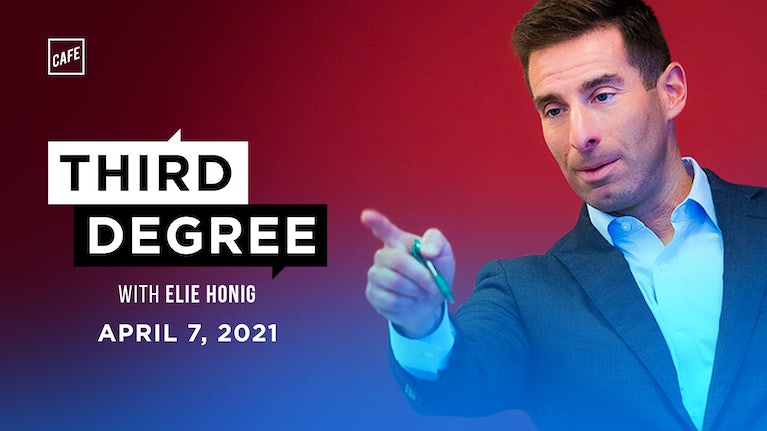 The Investigation of Matt Gaetz